Billie Piper’s directorial debut “Rare Beasts” calls itself "an unhinged romantic comedy," and it’s not an exaggeration. I can’t make heads or tails of this bleak black comedy about a single mom dating a borderline incel coworker who craves the status of marriage but seems to hate women and wants none of the work involved into actually making a relationship. It’s a movie that’s confrontational and awkward from the start, distancing its viewer with an acerbic perspective and characters that trade more thorny verbal jabs and slaps than anything resembling warm affection. This is meant to be funny but after a while, it just feels flat and often mean spirited. Is there anyone or anything to root for in this film? I’m not so sure.

At the center of the cold heart that beats within “Rare Beasts” is Mandy (Piper), a nihilistic single mother of a seven-year-old boy named Larch (Toby Woolf) who struggles with behavioral problems. Her work life developing TV shows isn’t much easier to cope with, but it is where she meets Pete (Leo Bill), a religious marriage-obsessed coworker who sets his sights on pushing her to accept him despite their differences. Their first date sets the tone for the movie. It’s an uncomfortable scene that grows only more awkward with each line of dialogue, like when Mandy says Pete sounds like a rapist after he complains about modern women. Somehow, their relationship continues in fits and starts, with Pete bringing Mandy to meet his rich but erratic family and the uneasy couple attending a wedding together. At home, Mandy also faces the terminal illness of her mother, Marion (Kerry Fox), and the antics of her wayward father, Vic (David Thewlis). Together, the many chaotic variables in her life lead her to decide what she really wants, and it may not be the feminist “we can have it all” ideal.

Somewhere in this mess of outbursts, meltdowns, and terse social situations, there’s a few interesting ideas about women feeling pulled between the pressures of motherhood, caring for parents, and a career. But there’s little outside of motherhood that seems to matter for Mandy. Her scenes with Marion are often even more loveless than her time spent with Pete, a man who is really just after marriage no matter who it’s with. Piper, who also wrote the screenplay, seems to have a lot to say but no clear message to hold onto. It would be a more interesting movie if instead of a hyperreal world where every woman manages her anxiety with the same meditative technique and most people of any gender tend to be jerks, it tried dealing with any of the problems the story brings up. With the exemption of Mandy, almost every other character has a singular function, mostly annoying her, leaving the issues each supporting character brings to the table as half-completed ideas.

Although the writing falls short, the acting is at least much more entertaining. Piper adjusts the intensity of her smile and bright eyes to show what Mandy is going through internally, just as the fear and anger within her spills out into public view. As Pete, Bill leans into the role of an asshole with a full-body commitment, even going so far as to throw his body to the ground to mimic a child’s temper tantrum. Thewlis and Fox share some of the movie’s most poignant moments, a breath of self-reflection that could have been extended to other parts of the movie.

By the film’s end, Mandy says she wants the conventional things Pete always said he wanted, despite never indicating this at any other point in the film. A chorus of women who once had her back now turn on her, booing her statements one-by-one as she has fallen short of their feminist expectations. It’s a shortsighted view on feminism and to a larger extent, gender dynamics. In the end, “Rare Beasts” is not so much nihilistic as it is misanthropic, toward its characters, their actions, and the world around them. Although the movie tries to end on an uplifting sweet note, it feels as unsatisfying as an empty calorie—and it would be just as forgettable if the aftertaste weren’t so bitter. 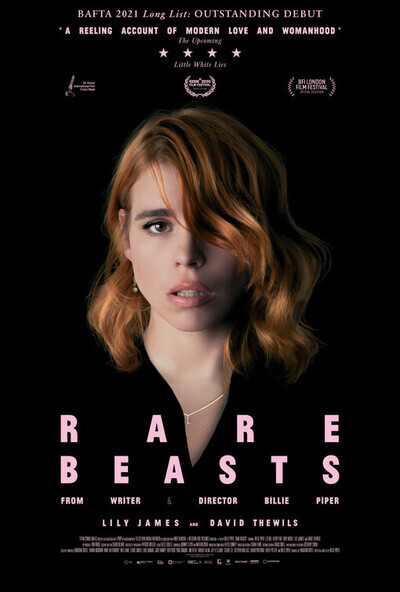