Jay Baruchel’s “Random Acts of Violence” is a depressing, cynical slice of nihilism, a movie that thinks it’s saying something about gratuitous violence and exploitation of real tragedy but is even more hypocritically hollow than the films it purports to criticize. Baruchel, who also co-wrote and co-stars, may have started from an interesting place with his desire to interrogate a culture in which we idolize serial killers but don’t even know the names of the people they killed, but he lost the point somewhere along the way, creating a film that never conveys a coherent point beyond its lavish, extreme depictions of human suffering. Gorehounds may want to check this out just for the intensity of the make-up work and impressive amount of body parts on display, but everyone else can randomly find something better to watch.

Jesse Williams plays Todd, the author of a successful series of comic books called Slasherman, which he wants to bring to a close but struggles with exactly how to stick the landing. Immediately, something is just a bit off in the script by Jay Baruchel & Jesse Chabot (based on the comic by Justin Gray & Jimmy Palmiotti) in that Slasherman looks and sounds pretty horrible. Todd regularly refers to giving his serial killer character the ending that such a hero deserves, and it feels more like a swipe at comic readers than comic writers. Of course, comic readers would turn a grisly murderer into a hero, right? Doubtful. Truly successful comic books have nuance and depth that we never see even the slightest glimpse of in Slasherman. It may sound like nitpicking but the fact that Slasherman was never really considered seriously means all that comes next is built on a rotten foundation. (And the same sense that "Random Acts of Violence" is talking down to comic readers extends to what this film thinks of horror movie fans too.)

Because, you see, Todd discovers that someone is recreating the brutal murders he devised in his comic book. And whoever it is happens to be right on the tail of Todd, his girlfriend Kathy (Jordana Brewster), his business partner Ezra (Jay Baruchel), and his assistant Aurora (Niamh Wilson). As they travel on a series of promotional events and so Kathy can work on a piece about the real killer that inspired Slasherman, someone has started a new killing spree, one that recreates images from the book. Could it be the original I-90 killer? And has he finally given Todd the ending he always needed?

At first, “Random Acts of Violence” plays like a degree off parody. There’s the aforementioned thinness of the comic book within a movie that’s amplified by the first few scenes that feel purposefully exaggerated to amplify the tension, but it only comes off as ridiculous. The gang arrives at a creepy gas station in rural America that has only pickled eggs and a guy outside asking about meth. There’s a version of this script that really leans into more horror-comedy and truly amplifies the city kids getting lost in rural Canada, but Baruchel & Chabot don’t go there, leaving the whole thing in a valley in which nothing feels genuine or purposeful.

And then Baruchel gets to the reason the movie was made: recreations of extreme violence. When a film like this doesn’t have believable characters or a believable setting and then it turns into a grisly gorefest? It feels shallow. It feels like the main reason the set-up didn’t work is because everyone was just killing time until they could rip a head off or spill someone’s guts on the table. 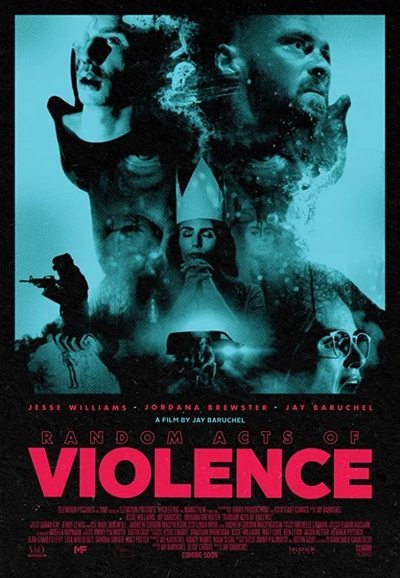 Simon Northwood as The Man