"When you talk to people, you find out they're not as hard as they appear to be." - Christopher "Quest" Rainey

Every Friday, Christopher Rainey hosts a "Freestyle" night in Everquest Recordings, his small music studio located in the basement of his North Philadelphia home. "Freestyle Fridays" are a tradition in the neighborhood, the one night of the week when hopeful hip-hop artists—or anyone who can put some rhymes together—hang out and let off steam at the mic. Children sit on the sidewalk outside the basement windows, trying to hear what's going on. Surrounded by friends crowding around the mic, with Chris Rainey at the control panel, these young men don't have to be "hard" anymore. They can be joyful, free, angry, hurt, human. "These young men need someone to talk to," Rainey says. "They need someone to give them encouragement." Over the course of "Quest," Jonathan Olshefski's extraordinary documentary almost a decade in the making, "Freestyle Fridays" emerge as an anchor, not only for the film, but for the Rainey family and members of the community.

"Quest" is the story of 10 years in one family's life. The film opens with the marriage of Christopher and Christine’a (known as "Ma Quest," even though she says,"I don't want to be everybody's mom but somewhere along the line, they just started calling me Ma.") The couple had been together for years, and both came into the relationship with adult children from prior relationships. They have one child together, a girl named P.J., 8 years old at the start of the film, who wants to be a drummer, or maybe a DJ. Christine'a works in a homeless shelter and Chris has an early-morning paper route. One of Christine'a's adult sons, William, lives with them. He has been diagnosed with a brain tumor and has an infant son. We get to know the family's routines. Christine'a braids Chris' hair, braids P.J.'s hair. The black cat purrs in P.J.'s lap. Chris walks P.J. to the school bus, quizzing her on the Presidential campaign going on (Obama's re-election). And every Friday night, the rappers show up to freestyle in the basement.

Only 90 minutes long, the film feels intimate and yet at the same time vast. It has a relaxed pace, but an intensity of focus. Editor Lindsay Utz had to sift through 300 hours of footage and somehow craft it into a narrative. The project started when Chris Rainey's brother took Olshefski to visit Everquest Recordings. Olshefski had never made a documentary before, and he initially thought of doing a photography project about Everquest, but eventually abandoned that idea and decided to broaden the scope. What interested him was Chris and Christine'a, as people. They are both riveting to watch, and even more so to listen to. Maybe it is because they approach life from a thoughtful and deep place, even as the slings and arrows come at them from every which way. They opened themselves to the filming process, they allow us to see them, in times good and bad. There is not a sense of exploitation here, even when things get really tough (and they get extremely tough). The couple is a co-creator in this project with Olshefski. He embedded himself in the family, more or less, for the next decade. We see William struggling with chemo, Christine'a reveling in being a grandmother, Chris taking one of "his" rappers—a talented but troubled young man named Price—to task for going down the wrong path. Halfway through the film comes a random tragedy that will mark P.J.—and the family—forever.

What makes "Quest" special is that none of these story elements are prioritized as more important than others. It's all important. Because that's how life is, on the ground, as you are living it. It's not that the film doesn't make its points. It does. But the narrative cannot be boiled down into a cliched Thesis Statement. Since it takes place over the course of a decade, it is clear what does change and what does not. Moments where news items flash on the TV screen in the house—Obama's re-election night, Obama's post-Sandy Hook speech, Hurricane Sandy—anchor the film down into specific dates, but other than that, Olshefski gives an impression of the flow of time.

When I hear people cautioning others to not "politicize" certain events, I wonder what world they live in. It's an extremely privileged point of view. Politics is not theoretical, it affects our everyday world in the most intimate ways. Whoever's in charge can impact our lives, our futures, with a swipe of his pen. A school shooting is inherently "politicized," whatever side of the fence you stand on. "Quest" takes place during Obama's two terms in office, with the Rainey family heavily involved in the re-election campaign, watching as the returns come in. "I wish my mom woulda seen this," says Christine'a. "She'd be trippin'." The neighborhood they live in is a close-knit one, but with out-of-control elements, and after a couple of people die in corner shootouts, residents take to the streets, calling for a stop to the violence. The rage is palpable. Late in the film, Chris and Christine'a are shown watching Trump's now-infamous, "African-Americans, what the hell do you have to lose?" campaign speech, and their faces recoil in disgust. "How does he know how we live?" murmurs Christine'a.

There's a beautiful scene when the neighborhood throws a party for P.J. on her return home. People eat food, do back-flips down the street. Kids run around. The Everquest hip hop artists, including Price, do welcome-home raps for P.J. Music blasts, and all the ladies jump up to do a group line-dance in the middle of the street. The mood is pure joy and hilarity. The neighborhood cops are there, too, holding paper plates of food, and laughing in admiration at P.J.'s basketball dribbling skills. It's a community.

"Freestyle Fridays" represent a fragile microcosm of the whole. It is a place where—in the midst of struggles to make ends meet, health issues, political wrangling far away—people can come and speak their minds and be supported. Watching the film makes you think, "This space must be protected. It represents the best of us. It shows us who we are when we decide to take care of each other." 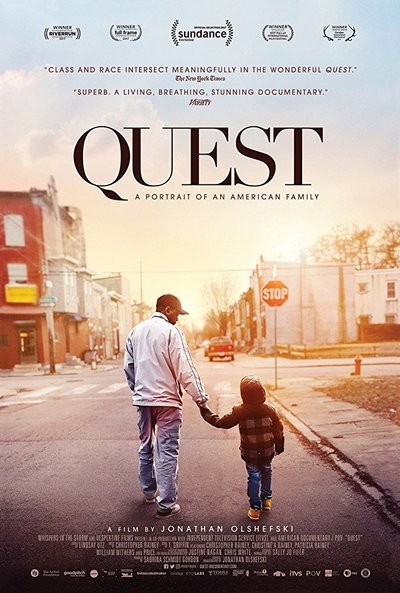 Christine'a "Mama Quest" Rainey as Herself

PJ Rainey as Herself