Watching "Queenpins" is like eating grocery store birthday cake. It is very pleasurable in the moment but likely to leave you feeling empty and a little queasy. The film is based on the true story of three Arizona women arrested in 2012 for a $40 million fraud involving ... coupons. Yes, like the grocery store coupons that come with the Sunday paper. Except that these ladies sold unauthorized or forged coupons for a fraction of the face value to consumers who used them to get lots and lots of stuff without paying for it.

They were a part of a fast-rising category referred to as "pink collar criminals," "nice" suburban women who commit non-violent crimes, mostly fraud or embezzling from businesses or from community organizations like the PTA. A reality television series about this trend had an episode on the Arizona coupon case. In this film we have one of the world's most adorable people, Kristen Bell, with her delightful "The Good Place" co-star Kirby Howell-Baptiste as the two women who almost make a multi-million dollar crime seem cute. The opening scenes show Bell's character getting arrested before a flashback to explain what happened. She does not seem to take it too seriously, telling us that "this is a story about little old coupons."

Many of the details of the real story have been changed, including the names, but also backstories to make the characters more sympathetic. Bell plays Connie, whose life is smaller and sadder than she expected, following her early success as a gold-medal-winning Olympic athlete (but in a low-profile event, race-walking). After multiple, very expensive fertility treatment failures, she and her IRS auditor husband (Joel McHale, given nothing to do) are estranged and deeply in debt.

Being clever with coupons makes her feel like she is making a financial contribution. "You are spending money we don't have," her husband says, looking at what was once supposed to be a nursery, now converted into what looks like a grocery warehouse. "I am not spending money!" she says. "I'm saving money!" That's the psychological illogic of coupons, referred to in the movie as the "coupon high." When we use coupons, we feel like we're getting away with something, like we're smart and special. That's one reason—beyond saving money—the scam was so successful. "We're Robin Hood," the queenpins reassure themselves. They don't call it robbery; they prefer "removing" or "separating."

The other queenpin is Connie's neighbor and close friend JoJo (Howell-Baptiste), who was a victim of identity theft that ruined her credit and her ability to apply for jobs. She lives with her mother and is trying to be an entrepreneur with a series of YouTube videos featuring tips on saving. When Connie discovers that a complaint letter about stale cereal earned her a coupon for a free box, it's a short road to finding a $2 an hour employee at the Mexico coupon printing plant (moved from the US to save money) who is willing to send them extras. Just to make him more sympathetic, in addition to the $2 an hour, he has a pregnant wife who also works at the factory.

When we're with Connie and JoJo, the tone of "Queenpins" is upbeat and sit-com-y, with Dolly Parton on the soundtrack telling us everything is going to be all right. A bright spot is Bebe Rexha as a dark web expert who helps Connie and Jojo launder their money. On the other side we have faceless and barely acknowledged corporations (always a convenient bad guy) and an LPO (loss prevention officer, a fancy title for private security). Tellingly, the changes to the details of the real law enforcement and private investigators make them less sympathetic. It might have been more interesting to have lead police officer on the case a woman, as it was in the actual arrest.

Instead we have LPO Ken Miller (Paul Walter Hauser), a dedicated but comically awkward stickler for the rules, who is eventually joined by an investigator from the USPS (Vince Vaughn, nailing just the right mix of exhausted irritation and integrity). Why the USPS? The coupons are being sent through the mail and the FBI does not take it seriously—because it's coupons. By mail. For diapers and toothpaste. The FBI has crooks who commit more manly crimes to track down.

Those are intriguing issues but the movie is less interested in exploring them than it is giving the queenpins makeovers and silly plot detours involving a militia and extended scatological humor. The last 20 minutes lose sight of whatever point they are trying to make beyond the fun of seeing people get away with breaking the rules. Like a coupon high, the fun of this movie does not last. 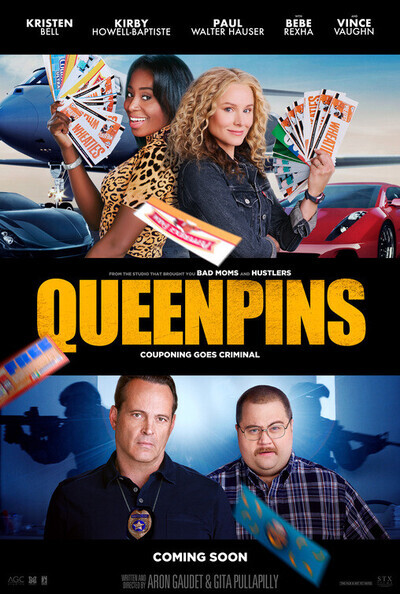