Ben Ferencz used to ask his son every night at dinner, “What have you done for mankind today?” Whereas this might seem like a bit of a stretch for many fathers out there, Ferencz had the high moral ground on which to stand, as he forever changed international justice and the way the world handles atrocity. He was more than just a witness to history, he had no less a stated goal than to “stop war,” and he saw the legal path to doing so at Nuremberg and beyond. “Prosecuting Evil: The Extraordinary World of Ben Ferencz” tells the story of the last living Nuremberg prosecutor, a brave young man who stood up and said that the only way we can stop injustice in the world is with justice. The film about him by Barry Avrich places Ferencz on a high pedestal, complete with rapturous commentary on his influence and impact from colleagues and family, but the man has undeniably earned it.

After serving in World War II and helping to liberate the concentration camps himself, Harvard lawyer Ben Ferencz became one of the prosecutors at the Nuremberg trials, one of the 20th century's most important events. In case they’re not teaching this well anymore in public schools, I’ll let the prosecutor’s brilliant opening statement do the speaking for me as to why Nuremberg was so essential to maintaining some sense of sanity in a world that had become insane in ways no one had previously imagined: “That four great nations, flush with victory and stung with injury, stayed the hand of vengeance, and voluntarily submit their captive enemies to the judgment of the law is one of the most significant tributes that power has ever paid to reason.”

Ferencz became tasked with prosecuting the Einsatzgruppen, the soldiers of the Third Reich, men responsible for thousands of murders of men, women, and children. A 27-year-old New York Jew was the main voice for not just the people who had been murdered but the concern that this could happen again. Ferencz says repeatedly in “Prosecuting Evil” that one of the main lessons he learned from the Holocaust was how easily normal people can become mass murderers. He not only had to prosecute the largest murder trial in history but do so in a way that made it more difficult for genocide to ever happen again. All 22 defendants were convicted and hanged.

If that alone had been Ben Ferencz’s legacy, he would be a monumental figure in international justice, but he was really just getting started. For the next 70 years – and, yes, he’s still working at 98 – he fought for human rights around the world. He started by going back to Germany and ensuring that the government there would take care of the Jewish cemeteries left to ruin because their caretakers had been murdered by the SS. And he worked human rights cases for decades to come from pro bono cases in New York all the way up to the Hague. He is an inspiration.

Here’s where reviewing a movie about an undeniable hero becomes a tad bit difficult. As I always like to remind people about all films, but something that seems to commonly be forgotten when judging documentaries, make sure to focus on form more than content. The form here is nothing special, and one almost gets the sense that this would work even better as an hour-long episode of “Frontline” or even a really strong segment on “60 Minutes.” So while the subject of “Prosecuting Evil” is a 4-star one that should be taught in more schools, the sometimes-dry and often-repetitive film about it is a 3-star one.

Having said that, I won't soon forget the moral fortitude of Ben Ferencz. It’s not something you see every day. I’ll sit my sons down at dinner tonight and I won’t ask them what they did for mankind today, but I’ll tell them about someone who did so much more for it than most people could even imagine. 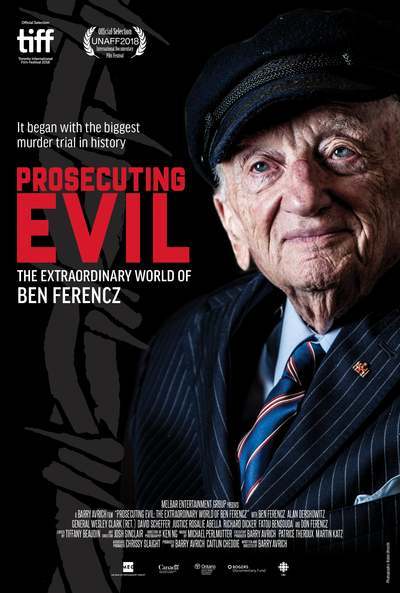 Benjamin Ferencz as Himself

Alan Dershowitz as Himself