Just to clear things up right away, it’s pronounced “pro” “mare,” as if you are in favor of a female horse. Not “pro-mar-ay,” as in rhymes with “Volare,” which is fun to sing. As for the meaning of the word, it’s not explained until almost an hour into this frenetic Japanese animated movie, the first feature from a production house called Trigger.

Up until the title is explained, the movie could just as well have been called “Burning Rescue” or “Mad Burnish.” Such are the two forces pitted against each other after the movie’s evocative and low-on-exposition opening scene. On a chaotic earth, various individuals across the globe are seen getting mad as hell and spontaneously combusting, shooting pink/purple flame at the objects of their disapprobation—and burning up a lot of the rest of what’s around them aside. Thirty years later, the mutants known as the “Burnish” have been tamed, in part by firefighter squads made up of pumped-up kids. They call themselves “Burning Rescue” and their leader is the brash, blue-haired Galo Thymos, acolyte of Primeopolis’ charismatic governor Kray Foresight.

After capturing the androgynous, angry leader of the revived Burnishers, Lio Fotia, Galo and the rest of the kids find out some things that make them wonder if they’re fighting for the right side. As is not uncommon in dystopian anime, they are not. As one of the Rescuers’ number has a sister working as Foresight’s lead researcher, the eager world-savers soon go up against their former backers, with Galo and Lio—literally makers of fire and ice—piloting a giant robot against Foresight and his own machine.

The convoluted plot, the misery of the future, the grandiosity of a certain type of heroism within that future—these features are all staples of Japanese animated sci-fi. What’s new here? Two things. The good-guy protagonist group is conceived and styled not just from rich precedents within the genre, but also from, alas, American “CGI” spinoffs. Yuck. The better news in in the design and animation, which is busy, brash, edgy, with a lot of unusual colors. The use of freeze-frame imagery, fake lens flares (in this movie they are square), and the way the movie pushes physical action into the realms of visual abstraction are often exhilarating.

The battle scenes are arguably too much of a good thing. They are almost constant, and almost always feature a hero looking at a villain and screaming “AAAAAAAAAAAAAAHHHHHHH!!!!!” and they often do this almost a half dozen times in an individual face off. Also, the songs and theme music are not just cheesy but practically always present; you have to build a tolerance for it quick if it’s not your cup of tea.

Still, there’s a lot of crunch and dazzle here. While the overall tone is pitched to a teen demographic, the creative energy and the execution on display is consistently engaging. 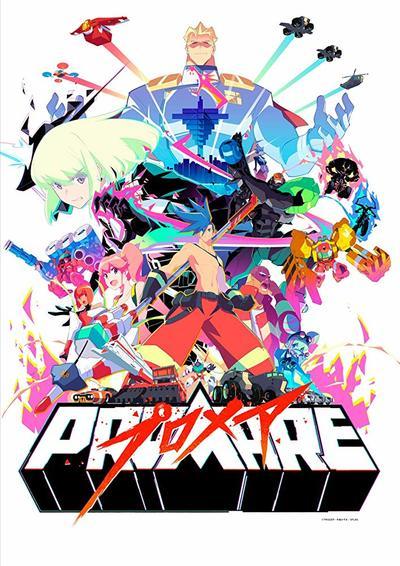