The rise in prominence and influence of Korean television series on Korean pop cinema has never been more apparent than in “Project Wolf Hunting,” a horror-tinged prison break thriller set on a cargo ship. In “Project Wolf Hunting,” a considerable ensemble cast of leering prisoners and square-jawed guards first stab and shoot at each other, then try to not be gouged or dismembered in turn by a mysterious, super-strong monster. As in a number of would-be franchises, the door is inevitably left open for a sequel. And as in a few TV series that have been disproportionately blown up to suit a feature-length production, there’s way more perfunctory bloodletting than you might expect or need. Yes, I know, it’s me saying that.

Somehow, “Project Wolf Hunting” is not based on a television series. I thought it might be given how many speaking parts it has. Also, the movie’s unabashed too-much-ness can sometimes be attractive, especially if you enjoy made-for- or adapted-from-TV productions, and therefore hope for a few moments of eccentric charm instead of any kind of sustained dramatic tension. Instead, “Project Wolf Hunting” is a sluggish, by-the-numbers body count flick that too often looks like an overproduced video game—the movie’s press release compares it to a “Capcom survival-horror video game”—as it’s played by a distracted, button-mashing Twitch streamer.

Believe me when I say that I wanted to love “Project Wolf Hunting,” especially given its creators’ preference for atmosphere-over-narrative logic. Why overthink a movie where 47 prisoners, led by the unrepentant serial killer Park Jang-du (Seo In-guk), overtake a desolate freighter with some help from two teams of armed lackeys and a Mr. Big type boss, who pulls all the needlessly tangled strings from a long-distance phone call away? Almost all the prisoners seem to not only know but also enjoy each other’s company, and all of their guards seem to not only be sympathetic, but competent, in a generically hard-boiled sort of way.

A languid connect-the-dots plot kicks off after Park escapes his handcuffs using a crooked metal pin that he hides under some dentures. Withdrawn fellow prisoner Lee Do-Il (Jang Dong-yoon) also escapes, and then sulks in the background for a while. The prisoners riot, after spilling gouts of blood all over the ship and each other. Meanwhile, a small band of right-minded characters, including Do-Il and can-do cop Ja-yeon (Jung So-min), band together, and ultimately take on Alpha (Choi Gwi-hwa), a zombie-like super-soldier who was lurking at the bottom of the boat this whole time.

No, seriously, there’s a creepy berserker on this ship—with staples on his eyes, no dialogue, and an insatiable need to pummel anything that moves by him—but, somehow, he’s not the main attraction in “Project Wolf Hunting.” Even though the movie’s title alludes to a top-secret military experiment that links Alpha with Do-Il. Alpha’s superpowers—Strong like five men! Genetic traits of wolf! Motion-activated! Batteries not included!—are only explained at the 84-minute mark. Of a 122-minute movie.

Until then, a torrent of blood overcompensates for a lot of otherwise monotonous on-screen violence. Several arteries rupture and more than a few torsos are shanked by characters whose personalities boil down to the fact that they’re evil and they know it. At least the sound design features some appropriately icky hissing and crunching sounds. Then again, Alpha doesn’t really do anything memorably gross until about 78 minutes into the movie, at which point he rips one victim’s arm off and beats the poor guy to death with his own severed appendage. That was alright.

Nobody should expect high art from a movie where paint-by-numbers badass Ja-yeon scowls and sighs that the prisoners had the transport “Rigged from the get-go. We got worked.” But every little shock and effects-driven prick to the spine only confirms what the last one did: the filmmakers only know how to play one note and they never learned how to make it sing. For proof, see a phone call to the shadowy mastermind behind it all, whose dramatic climax is only achieved after a noisy act of fellatio is terminated by a snap of the neck, and the not-so-casual revelation that: a guy was performing oral sex on another guy. Don’t overthink it, they’re just trying to make you gasp, and have no idea how.

There’s a definite beginning, a doughy middle, and a gaping end to “Project Wolf Hunting,” but they somehow don’t cohere into a feature-length spectacle. Plot, characters, and performances ... none of these matter as much as the lavish gore that coats the movie like the watery gak that soaks latter-day Gwar concerts. Fine by me, but when does the movie start? 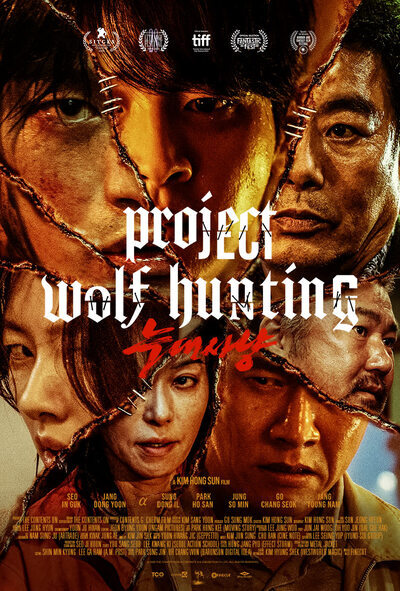