Survival horror is a tough enough genre to pull off; defining the characters within one through tired clichés and boring archetypes only makes it more so. Films like “Preservation” only work if the viewer can put him or herself in the shoes of a character trapped in a nightmare. What would you do if you were hunted like prey? Would you be able to kill, even if it was in self-defense? Would you be able to sacrifice your own safety for that of a loved one? Such questions only have resonance if the characters and their plight feel genuine. Such is not the case with “Preservation,” a film that bold-faces and underlines its quasi-commentary on a generation addicted to technology and cell phones but has less relatable humanity than most of the video games it attempts to decry.

Sean (Pablo Schreiber of “Orange is the New Black) is a recently returned vet who mumbles foreboding nonsense like “A real hunter doesn’t give chase; a real hunter is already there” while on the way to a hunting trip with his brother Mike (Aaron Staton of “Mad Men”) and sister-in-law Wit (Wrenn Schmidt of “Boardwalk Empire”). Sean might as well be wearing a neon shirt that says “This Can’t Possibly End Well.” And he’s clearly not the only one dealing with issues as, of course, Wit is newly pregnant and her marriage is not in the best of shape. Unlike the off-the-grid Sean, Mike can’t get off his cell phone long enough to fix the problems in his life. It’s the hunter brother, the tech brother and the vegan caught in the middle! When Sean casually asks Wit over a bonfire, “When’s the last time that you and Mike made love?,” one will assume that “Preservation” is going to a love triangle climax in which Wit has to choose between the brainy brother and the brawny bro.

I must give writer/director Christopher Denham (star of TV’s “Manhattan,” as well as important supporting roles in “Argo” and “Shutter Island”) credit in that that assumption is mostly wrong. Sean, Mike and Wit wake up in a very different nightmare. Overnight, their clothes and supplies have been stolen, and, far more ominously, each of their foreheads has been marked with a black X. What started as a character drama has taken an abrupt left turn, which is refreshing in theory, but the turn ends up being a dramatically thin, predictable one, as “Preservation” plays out as a traditional hunter-vs-prey survival drama straight out of the ‘80s. One minute, the characters are getting to know each other, the next minute one is stabbing someone while muttering the very Stallone-esque “You killed my dog and now I’m going to kill you.”

The tormentors are slowly revealed—and I won’t spoil the details of precisely who they are—but they’re very clearly designed to call back to video game culture of the last five years, with masks that will remind players of games like “Army of Two” or the mega-popular “Call of Duty” franchise. One of the killers even pauses long enough to play a violent video game on his phone just in case the message isn’t crystal clear. Denham’s script fires shots at easy targets instead of producing actual tension. To be fair, Schmidt is actually quite good, giving her performance the physical all that it will clearly demand from scene one, but Denham doesn’t give her enough to do as an actress other than to survive his too-obvious structure. There are few surprises here after the narrative’s turn to survival horror as the film plods to its inevitable conclusion, and even that final shot feels unearned. 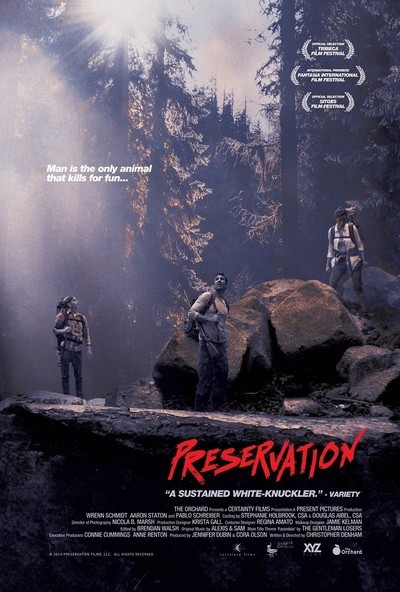 Michael Chacon as Will