At this year’s Independent Spirit Awards, the co-writer and director of “Premature,” Rashaad Ernesto Green received the appropriately titled “Someone to Watch” award. His film was also nominated for the John Cassavetes Award, which is also appropriate; Green produced this film, financed it and even shot some of it in his own apartment, channeling the spirit of the late filmmaker most associated with the origins of American independent cinema. At times, “Premature” has the same fly-on-the-wall, near-improvisational and casually meandering qualities of a Cassavetes film, though its refreshingly honest and direct depiction of Black sexuality made me think of early Spike Lee or Bill Gunn.

I thought of a lot of things as I watched Ayanna (co-writer Zora Howard) and Isaiah (Joshua Boone) navigate the ups and downs of a bittersweet love affair, but this is not to say my mind wandered off. Instead, Green’s direction and the editing by Justin Chan create an atmosphere that, from scene to scene, engages the viewer in conversation with the material. This encourages us to create our own allusions to other movies as well as meditate on our own real-life memories of romance.

“Premature” accomplishes this by being a simple, bare bones love story. While we are occasionally privy to other aspects of the protagonists’ lives, for the most part our focus remains on how their romance unfolds, blossoms and eventually deteriorates. This relationship comes cloaked in a myriad of sensory experiences, from a well-placed jazz song to the textured, tactile cinematography of Laura Valladao, who conducts a master class on how to sensuously light Black skin of all shades. Adding to all this is a strong female voice and perspective that gives an often powerful clarity and depth to Ayanna’s journey toward adulthood and agency.

The city of New York, or more accurately, the village of Harlem, plays an unforgettable role in “Premature.” Its mise en scène runs bone deep in this film’s body: the laundromat where Ayanna and Isaiah have their first real conversation, the park on the Hudson where they share their first kiss, the stoop where Ayanna runs to escape a family argument, the 145th street MTA station where the lovers have their first major fight and the vestibule where their most heartrending moment occurs—these are all supporting characters rather than mere locations. Green frames and presents them as such, making this an additional love poem to his hometown.

Speaking of poetry, Ayanna is constantly jotting down verses in a little notebook she carries. Isaiah is a musician working with powerful singer Dymond (Myha'la Herrold) on some new songs for her club shows. Of course, one can predict that Isaiah and Ayanna will, as a symbolic expression of their love, collaborate on one of Dymond’s tunes. That prediction is validated, though not in the way we expect. In her small role, Herrold acts as kind of an uncredited spokesperson. She not only voices some of the philosophies about music that Isaiah endorses or challenges, she also gives voice to Ayanna’s own personal growth, putting a final gloss on Howard’s excellent, rich characterization. This makes the last scene of the film rather irrelevant, but more on that shortly.

What’s most interesting about Green and Howard’s screenplay is how it challenges our perceptions of the lovers and their actions, both positive and negative. They’re clearly out to elicit a response, not so much in a provocative way but a therapeutic one. No matter how balanced you may try to be as a viewer, you’re going to choose a side predicated on your own experiences (and perhaps even your own gender). And you may feel like the side you’re on is unfair in some moments and justified in others. Like human nature, it gets messy, and there’s even a scene that hints at the kind of heated conversation men and women might have after seeing this picture. Regardless, Boone and Howard’s performances never descend into caricature nor lose their complexities.

So much of what passes for African-American cinema focuses on our trauma. Rather than stitch it into the fabric of the characters’ lives, as reality does, it often sticks out like a sore thumb soliciting sympathy while minimizing all other empathetic avenues. “Premature” is not without its rough moments—there’s talk of a police shooting and a brutally honest examination of unwanted pregnancy and abortion. But these elements exist in the bigger universe of life as orbiting planets rather than as the centered Sun they’d most likely be in other movies. This recalibrates the characters as people who are dealing not just with Black issues but with human issues as well. One of those human items, which I’ll leave you to form your own opinions about, is the age difference between Ayanna and Isaiah. She’s 17, he’s, well, definitely not 17. “He grown!” says one of Ayanna’s supremely entertaining girlfriends.

I don’t know exactly how grown he is, but rather than go there, I’m going to pivot to that aforementioned ending, which I will not spoil. I believe I know why it’s there, but Dymond’s musical number and the party sequence that follows her song resonated so strongly with me that the closing scene felt unnecessary. Call me a grouch, but I think it’s the one time “Premature” dips into romantic movie cliché, barely pulling itself out by striking a note of ambiguity rather than definitely answering the question it poses. I didn’t think that question needed to be asked, but I’m willing to concede I am probably in the minority on that. No matter. This is a good movie, a romantic and richly drawn conversation-starter. 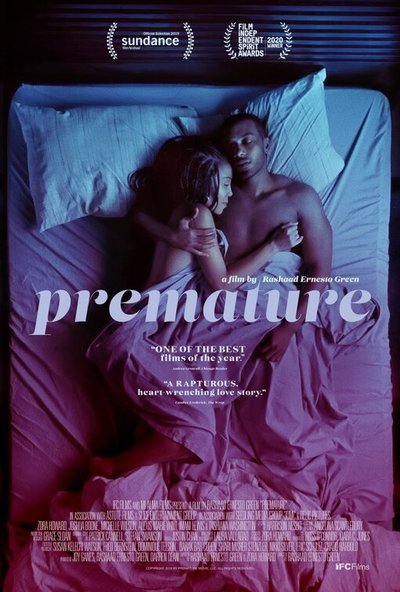