The dismal character study “Poser” concerns a podcaster who, through a series of interviews with “underground” musicians, worms her way into a scene she obviously wants to be part of. As its title suggests, much of “Poser” fixates on the dissembling, pathological behavior that characterizes Lennon Gates (Sylvie Mix), a podcaster and wannabe songwriter, and her relationship with Bobbi Kitten (as herself), half of a feminist-themed indie pop duo.

Writer/director Noah Dixon and co-director Ori Segev negligibly hide their contempt for Lennon by letting Mix’s character hang herself with her own inner monologue, articulated through excerpts from her podcast, and her equally transparent actions. Lennon’s motives are still obvious, and so is the movie’s superficial presentation of her compulsive posturing. No real person acts or looks like Lennon does, not until you’ve blown up their human qualities to a hatefully over-sized scale.

You can tell how little Dixon and Segev think of Lennon from a few introductory scenes that portray her as a grasping, non-introspective hanger-on. She googles “how to create a podcast” before she starts interviewing a bunch of eager and slightly ridiculous bands in Columbus, Ohio. Lennon also explains her process to us: first she uses a smartphone to record her podcast interviews, then she re-records that audio with a cassette player. Because “analog just sounds better.” “My process may seem weird, but I embrace the unconventional,” she pouts before describing her focus on “bands that you’ve probably never heard of.” If you could possibly meet a person like Lennon in real life, you probably wouldn’t want to know them for very long.

Much of “Poser” concerns how closed-off and therefore inaccessible Lennon is. But Lennon and Bobbi constantly show us and, to some extent, each other what they like about each other. Bobbi takes a shine to Lennon after she hears some of Lennon’s song lyrics, written down by hand in her journal. “You’re an artist, you get it,” she tells Lennon in a later scene.

That’s obviously an overstatement for effect since Lennon never really seems to “get it.” In one scene, Lennon imitates Bobbi’s gestures, recorded at a live concert, in a dirty mirror. Then she literally mimics Bobbi at a performance art show, because she doesn’t understand how performance art works, and Bobbi’s eager to act it out for her. Spontaneous syncopation is what makes good art, it seems. Or, as Bobbi puts it, “witnessing something I haven’t seen before.”

Lennon's skin-deep alienation is not only the film's subject, but the ultimate test of how long you want to hang with “Poser,” a movie that’s presented in dark, warm colors that barely enhance our view of whatever’s in the foreground. Mostly people’s faces, all of which seem to soak up the shadows that Bobbi and Lennon seem to think flatter their features. (“I come alive in the dark,” Bobbi sings in one scene) That’s also obviously not the case since “Poser” is about the perils of retreating into a fantastic subculture which, in this movie, only exists in the intuitively negotiated space between Lennon’s head and the movie’s reality.

Masks, like the one that’s literally worn by Bobbi’s mute creative partner Z Wolf (as himself), are a revealing concern, as one dialogue exchange spells out for us. Because when Lennon asks Bobbi why he wears a latex wolf mask, Bobbi says that it’s Z Wolf’s “way to not have to deal with people’s bullshit.” This frivolous line also explains why so much time in “Poser” is spent highlighting the impassive, unreadable expression on Mix’s face. She’s got no personality beyond the moves and gestures she takes from Bobbi, and no life beyond the work that she does with her “analog” recorder, shot with a special emphasis on the red crosshair over its transparent cassette window.

Lennon and Bobbi constantly tell us who they are, but never in a way that requires much unpacking or critical thought. Bobbi may be pretentious—“I don’t give a f**k what they think” she says, though who “they” remains unclear—but at least she’s trying to figure out who she is without manipulating others. According to this played-out arthouse stalker narrative, that is.

“Poser” might have been more satisfying if its gauzy night-club aesthetic and bold, underlined dialogue didn’t smother viewers with trite observations about hipster artistes. Sure, the movie is easy on the eyes, but it doesn’t move very far away from the same talking points, repeated ad nauseam until Lennon’s story finally arrives at its inevitable feel-bad conclusion. 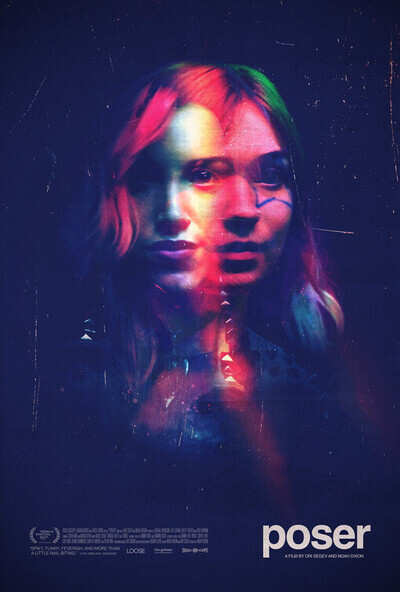