Elephants are the gentle giants of the animal kingdom. Widely considered to be intelligent by contemporary ethologists, elephants have exhibited such complex behavior as grief, self-awareness, and empathy, even for other species. Case in point: when I was five years old, I went on an elephant ride with my parents in India. Along the way, I fell asleep and somehow my sock fell off my foot and onto the ground below. The elephant reportedly stopped in its tracks, picked up the sock with his trunk, laid it on my lap, and then continued on with the ride.

Kirsten Tan’s debut film “Pop Aye” co-stars a large elephant and much of the film’s emotional heft hinges on his warm visage. He necessarily dominates the frame, even in long shots with plenty of negative space, and his tender presence lingers over the action at all times. He lumbers along and occasionally sprays water from his trunk. Though his expressions are neutral, he nevertheless conveys kindness and grace. There’s something to be said about an animal so large and so benevolent that everyone he passes must stop and engage with him.

However, the elephant is only one-half of the equation. “Pop Aye” also stars Thaneth Warakulnukroh as Thana, a sad-sack architect in the midst of a mid-life crisis. He’s being squeezed out of work by younger, more ambitious employees in his office. His landmark Bangkok high-rise is set for demolition. His wife Bo (Penpak Sirikul) feels sexually unsatisfied and generally resentful towards him. He walks through the world in an existential haze until he encounters Pop Aye the elephant, a childhood companion he had in his rural village, on the streets of Bangkok. Thana feels invigorated almost immediately and soon sets off for his hometown to return Pop Aye to his natural habitat.

Though “Pop Aye” essentially tracks the relationship between Thana and Pop Aye, specifically how the former projects his own internal fears onto the animal, Tan adopts a traditionally episodic approach akin to most road trip films. Thana meets various people on his journey, including Dee (Chaiwat Khumdee), a lonely drifter who wishes to be reunited with his brother in heaven, Jenni (Yukontorn Sukkijja), a trans woman prostitute in a roadside bar, and eventually Thana’s uncle Peak (Narong Pongpab) who has remained in their childhood village to raise a family. These interactions ostensibly embody a weighty significance for semi-obvious reasons: they remind Thana about the importance of life’s small pleasures and to allow one’s mortality to invigorate rather than paralyze.

“Pop Aye” has a pleasant, amiable tone, buttressed by Chananun Chotrungroj’s warm photography and picturesque framing as well as Lee Chatametikool’s purposeful editing scheme, and yet the film feels lacking overall. It’s difficult to place blame at the feet of any one individual as the parts more or less excel even though the whole feels slight. Warakulnukroh, a Thai progressive rock musician in his first acting role, imbues Thana with loneliness and yearning that feels achingly familiar. Tan engages with the alienation of urban and rural life through her script and direction, accurately pinpointing the feeling as both an internal struggle and an external capitalist malady. “Pop Aye” has a light touch that neatly disguises much of its grander thematic ambition.

Yet, “Pop Aye” never quite reaches that magical, elliptical quality that it appears to be striving for. There are scenes that scan as powerful in the abstract, like a duet between Thana and Jenni in the bar, or an impromptu funeral shared with two complete strangers, or any of Thana’s placid childhood flashbacks, but they don’t assume much gravity in conjunction with the rest of the film. It’s possible that the road trip material is too mundane or that its microcosmic relationship with Thana’s interiority and/or Bangkok’s urban dilemma doesn’t come across as well as it should. It’s also possible that Pop Aye and his place in the film are too oblique to ever achieve much emblematic import, especially considering how many detours the film makes.

But Pop Aye himself, played by the elephant Bong, has such a magnificent charisma that Tan’s film lights up whenever he’s on screen. I don’t mean to damn “Pop Aye” with faint praise when I say that a silent elephant outshines most of his human co-stars, just that his mysterious, yet calming nature elevates the film’s occasionally humdrum substance. Make no mistake: He’s genuinely worth the price of admission. 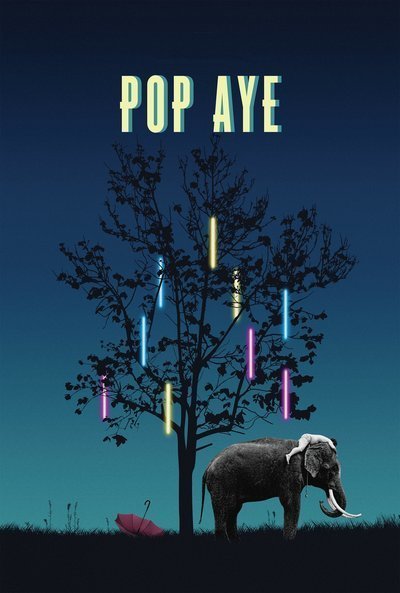