The letters in the title of "Planes, Trains and Automobiles" roar across the screen like a streamliner, and the movie itself has the same confidence. The movie tells the story of two travelers who share a modest wish in life, to fly from LaGuardia to O'Hare on schedule, and it follows with complete logic the chain of events that leads them to share a soggy bed in a cheap motel in Wichita, Kan.

The travelers are played by Steve Martin and John Candy, Martin as the fastidious, anal-compulsive snob and Candy as the big, unkempt shower-ring salesman with a weakness for telling long stories without punchlines. Both actors are perfectly cast, not so much because they are physically matched to their roles as because the movie is able to see past their differences to an essential sweetness they share.

The film was written and directed by John Hughes, who previously has specialized in high-quality teenage movies, such as "Sixteen Candles" and "The Breakfast Club." One hallmark of Hughes' work is his insistence that his characters have recognizable human qualities; he doesn't work with a cookie cutter, and the teenage roles he wrote for Molly Ringwald, Emilio Estevez, Ally Sheedy, Matthew Broderick and others helped transform Holywood's idea of what a teenage movie could be. Hughes' comedies al ways contain a serious undercurrent, attention to some sort of universal human dilemma that his screenplay helps to solve.

All of which may seem a million miles away from Steve Martin and John Candy, whom we left on that beer-soaked mattress in Kansas. ("You should have known what would happen when you left a six-pack on a vibrating mattress," Martin nitterly complains.) But "Planes, Trains and Automobiles" is a screwball comedy with a heart, and after the laughter is over the film has generated a lot of good feeling.

The story opens in Manhattan, a few days before Thanksgiving, when Candy grabs a taxi that Martin thought was his. The two men meet again at a departure lounge at LaGuardia, where their flight to Chicago has been delayed by bad weather. Martin immediately recognizes the other man as the SOB who got his cab, and inevitably, when they finally board the plane, he finds himself bumped out of first class and wedged into the center seat next to the ample Candy.

The flight eventually takes off, only to be diverted to Wichita, where Candy has enough connections through the shower-ring business to get them a room - one room with one bed. This is the beginning of a two-day nightmare for the fastidious Martin, who at one point screams at Candy that he snores and smokes, his socks smell and his jokes aren't funny.

How bad are Candy's jokes? Martin shows no mercy. He'd rather attend an insurance seminar than listen to one more of them. During Martin's long outburst, the camera holds on Candy's face, and we see that he is hurt, not offended. He only wants to please, to make friends. And, as usual, he has tried too hard.

The next morning, back at the Wichita airport, Martin tries to dump Candy, but fate has linked them together. Through a series of horrible misadventures on trains, buses, semi-trailer trucks and automobiles, they end up on a highway somewhere in southern Illinois, trying to explain to a state trooper why they are driving a car that has not only crashed, but burned.

There are a lot of big laughs in "Trains, Planes and Automobiles," including the moment when the two men wake up cuddled together in the motel room, and immediately leap out of bed and begin to make macho talk about the latest Bears game. The movie's a terrific comedy, but it's more than that, because eventually Hughes gives the Martin and Candy characters some genuine depth. We begin to understand the dynamics of their relationship, and to see that although they may be opposites, they have more in common than they know.

This is a funny movie, but also a surprisingly warm and sweet one. 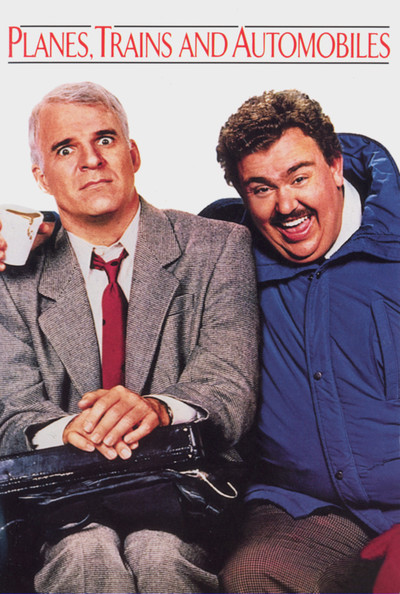