"Plane" is the case of an action movie in which the dumb title—the most memorable thing about it—isn't an artistic statement, it's an alibi. If it can convince you that it's so simple, suddenly all of its laziness with character development, plotting, action sequences, etc., seems quaint, if not knowing. Add the pitch of Gerard Butler on a self-rescue mission, saving his flight passengers and crew from angry Filipino militants after a crash landing, and the expectations lower themselves.

This rickety vehicle is produced by Butler, who seems to make these movies to avoid wearing superhero spandex or having to hurl himself off a cliff like Tom Cruise. He's fared better as a last action hero of a certain type of movie, and the biggest problem with "Plane" throughout is that it isn't wilder; it does not revel appropriately enough in its open dumbness. For its junky concept that eventually embraces '80s action storytelling firmer than a handshake in "Predator," there are so many missed moments in which director Jean-François Richet attempts to get a free genre pass isn't so much as coasting but rushing to get itself over with.

Things are looking up for "Plane" when it's gearing up for a big crash. Our main hero—Plane—is struck by lightning in a large spat of brutal weather, knocking out its power and dooming it to an unforeseen landing. With more of an air of "I can't believe this bad service," the 14 passengers on board start to freak out progressively; things become even direr when someone thinks they can outwit seatbelts. The sequence is cut with a punchy, glad-you-aren't-there intensity, and a couple of illustrative stunts—nasty things involving heads and neck trauma—make a firm point not to test gravity. Butler's pilot Brodie Torrance, who kicked off the flight with some Southwest Airlines-grade jokes over the intercom, executes some macho maneuvering and has his co-pilot Samuel (Yoson An) clock the ten minutes they have before they eventually crash land on a remote island in the Philippines.

During this tumultuous descent, it's mighty strange when "Plane" shows a closeup of a drafted text message but not long enough for us to read whatever it says. But that's more of a hint that no characters have any important point to this story, aside, maybe, from a captured fugitive named Louis Gaspare (Mike Colter), who is handcuffed to an officer at the back of the plane. His history of committing homicide comes later in handy when the flight lands in progressively hostile territory. Brodie, with his history in the RAF and a gun secretly in his pants, brings him along the mysterious terrain to find help. Butler and Colter proceed to fend off plainly bad guys, with little chemistry between them in the process.

Everything shifts for them when, after making a communications breakthrough at a shady warehouse (bullets on the floor, not a great sign), a bad guy sneaks up from behind and tries to kill Brodie. The scuffle that ensues is impressive, with the camera mostly holding on Butler's face as he wrestles with this bigger dude in tight quarters. But nothing is as exciting or long-lasting from here on out, even when Richet tries to heighten the danger with merciless militia men who roll up and kidnap Brodie's passengers and crew. "Plane" rushes through its emotional and explosive beats so that it can get to the next crisis without having to fill out the previous one, and it wildly skims on the good stuff in the process. Hostage situations are quickly fixed, dull gunfire exchanges are executed as if they were shot on different days, and even Colter's stiff, quiet killer only has his silence to make his stiffness remotely interesting as he doesn't get much of an arc despite the ominous promise at the beginning. It's just a bunch of action filmmaking gruel, presenting the jungle terrain with a color tint that matches the dank sweat on Butler's t-shirt.

The biggest scene-stealer, really, is Gun, a quite large rifle brought by some airline-hired American black ops dudes who later appear, and which can fire bullets that rocket through car doors and exploding rib cages. Gun has a sounder dramatic arc than any other heroes in this assortment of action figurines and scowling cardboard cutouts and at least provides gory over-the-top violence like "Rambo" (2008), given the film's sleazy evolution. (My preview audience audibly adored Gun more than everything and everyone else in "Plane.”) Everyone else on-screen, from Butler's simply exhausted pilot to Colter's fugitive-maybe-looking for redemption to the super-scowling Filipino militia leader named Junmar (Evan Dane Taylor), is treated with such little sincerity by the script that you almost start to feel bad for them.

Meanwhile, at Trailblazer Air headquarters back in New York City, the film props up its message that airline companies, not just their pilots, are ready to go to war for you. A group of people sits around a U-shape table with ominous lighting. The airline's CEO, Hampton (Paul Ben-Victor), uses his list of contacts trying to locate and then protect the passengers, including those American guys who come with their own equipment. A no-BS PR hotshot named Scarsdale, played by Tony Goldwyn, has all the answers and plenty of 'tude, too, like when he barks, "If you have New Year's Eve Plans, I just canceled them." It's telling how these scenes are filmed with the same feeling of a board room in one of Butler's "Olympus Has Fallen" movies. Like the other bits of wonky heroism in the disappointing vacation that is "Plane," it makes for an exaggerated joke with no punchline. 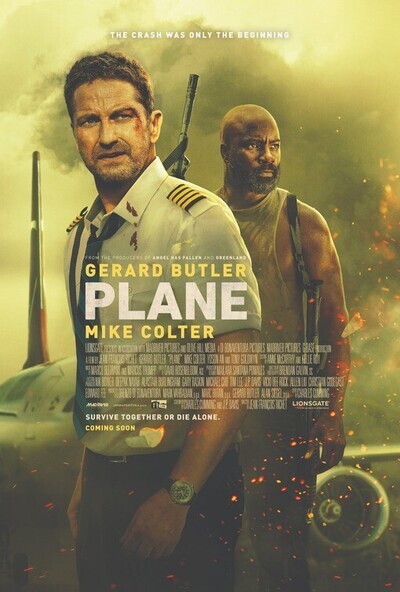 Yoson An as Dele