“Piggy” is like the feature-length version of an editing gag that (often) feels cheap. Backed into a proverbial corner, an angry character lashes out at another in some explosive bit of violence. But then: another cut reveals this moment was just a fantasy in our protagonist’s head (you can see this gotcha bit in David O. Russell's “Amsterdam” this week, for example). A cheek is turned instead, or at least, the capacity for violence is brought back to reality. Even when the other person really has it coming to them.

Written and directed by Carlota Pereda, “Piggy” visualizes this more literally. There is actually a violent force that’s lashing out at the tormenters of teenager Sara (Laura Galán), and he’s a slasher killer. His violence against Sara’s list of bullies provides a temptation of justice, and a release for her from all the awful things they have said about her or her or her weight, right to her face and to a slew of likes on social media. When Sara swims at the town pool, already self-conscious about being out in a swimsuit, her bullies hunt her down, they call her names, hold her down underwater with a net, they run away with her clothes and towel. Trying to get away from this nightmare becomes a gauntlet, as Sara’s vulnerability attracts even more torment.

Some of these venomous bullies soon go missing; Sara even sees one of them being stuffed into a white van in the woods, and she makes eye contact with the killer. But Sara doesn’t go public about what she saw. She initially lies about whether she was at the pool where the slasher might have started his stalking, in part for fear of the embarrassment of revisiting what happened. It would also be more torment, and to help those who have only made her life worse. And maybe they really had it coming to them.

“Piggy” has a lot of tongue-in-cheek jokes, like the corpse that Sara casually swims by in the pool without her noticing, but it doesn’t turn this latest development into some darkly comic victory. Pereda’s script instead plays it like Sara is trying on a new costume she’s not sure of—one that has her thinking and considering whether she's doing the right thing for herself. As the pressure for her to speak up becomes more and more, with the townsfolk investigating in between their tears, Sara goes inward, which usually involves a lot of huffing to match her usual expression of silence. It’s a tricky thing to play this type of transformation while still honoring the anger and sadness that later has her bursting out, “I wish you were all dead!”

Galán does this well, even though this inner turmoil is placed in scenes of interrogation (from the locals, and police) that aren't funny, scary, or sad when corpses start appearing. (Pereda throws in another act of violence that has the weight of a deleted scene.) When it should be jostling us in one way or another, "Piggy" feels like it's just killing time.

Played by a burly Richard Holmes, the killer is a heavy-handed embodiment of Sara’s anger toward the bullies, a manifestation of anyone’s desire for their bullies to suffer. She finds comfort in him; their faces get close after they bump into each other in the woods (both of them trying to clear their tracks), and even though he has a knife in hand, her conception of the moment is romance, fantasy. Later, when they meet again, he does things more akin to Prince Charming while committing more violence that could be for her benefit, if she so chooses. He sees something in her, and she in him. His beats show the flip side of a love story with a brooding mystery man: sometimes said mystery figure is just Jason Voorhees.

Inside her home, Sara receives a lot of minimizing from her mother, who peppers in a “What is wrong with you?” on nearly every interaction. She is played with memorable presence by Carmen Machi, and in one of Pereda’s more amusing jokes, she always catches Sara in moments of her trying to sneak around the house. At times this character seems to be written as a more out-of-touch classic mother figure, but Machi shows the protective nature at the heart of this archetype. She’s also one of the few characters who get enough dimension from a script that gets more and more narrow.

This all brings “Piggy” to a finale that simplifies everything even more down to a slight parable about having corrosive hate in one’s heart. Pereda gets a couple of staid slasher genre thrills out of it, mixing her boxy Academy aspect ratio with explosive gruesomeness, but it mostly, plainly hinges on what Sara does when confronted with the ultimate choice of her fantasy. Do bad people deserve the worst things? The question comes from a commendable surplus of empathy, but “Piggy” struggles with how limiting its intent can be when asking it. 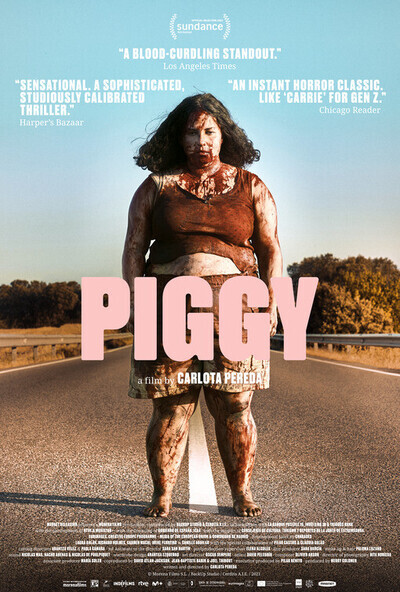