In theory, the kitschy supervillain comedy “PG: Psycho Goreman” seems like a guaranteed hit: a gory and knowingly goofy riff on fish-out-of-water action-adventures like “Terminator 2: Judgment Day” combined with rubber-suit monsters from Japanese tokusatsu type shows and movies like “Ultraman,” “Masked Rider,” and even “The Guyver.” Throw in a couple of precocious kids, a bunch of practical effects that recall standout ‘80s sci-fi and horror movies (like “RoboCop” and “Videodrome”), and a murderous guardian angel sidekick, and you’ve got a surefire formula for success. That’s the theory, at least.

In reality, “Psycho Goreman” isn’t clever or lively enough to be more than fitfully fun, especially given how much time is spent mocking generic, but painstakingly recreated plot contrivances. Maybe there’s a more ambitious (or at least righteously silly) parody amidst all the schticky callbacks and corny dialogue, but it’s hard to tell based on the movie’s episodic sketches.

“Psycho Goreman” opens with what looks like a parody of ‘80s toy commercials: brother and sister Luke and Mimi (Owen Myre and Nita-Josée Hanna) play a spirited round of Crazyball, complete with slow-motion roughhousing, mid-air jumping, and electric guitar shredding. Mimi, being the more aggressive of the two children, wins, so Luke has to bury himself alive (ha, kids these days). He starts the process, but quickly stops once he discovers an alien gem from the Planet Gigax (sigh), which summons a murderous, potentially world-ending creature that refers to himself by his preferred nickname: “The Archduke of Nightmares.”

Mimi doesn’t like that title though, and since she’s got the Gigaxian gem that somehow controls the Archduke, she (and Luke) rename our guy Psycho Goreman (Mimi on this new name: "It's fun, it's hip, it's now, and it's wow!"). They bond and mix it up with PG while we wait for a clash between him and religious zealot/robot angel Pandora (Kristen MacCulloch), Psycho Goreman’s vicious, holier-than-thou arch-nemesis. In the meantime, Mimi forces Psycho Goreman to play with her and her brother, which sets up a few chintzy set pieces and/or splattery monster fights, none of which are personal, dynamic, or weird enough to be memorable.

Unfortunately, waiting for something to happen in “Psycho Goreman” is often the hardest part of watching this otherwise soft-boiled spoof. There are even a couple of jokes about how aimless the movie is, or more specifically: gags that either draw out or interrupt the already slack set-up for new plot developments and confrontations. At the end of a dream sequence, Luke asks Psycho Goreman, “What happens now?” to which PG growls, “We wait for this dream of yours to conclude.” There’s a long pause as a random gaggle of zombies moan and crawl around the two characters. “’kay,” Luke adds, whole seconds before the scene wraps up.

Soon after that: Psycho Goreman gets into a fight with a gang of men in rubber monster suits, all of whom look like ripoffs, I mean tributes to other shows or movies. Luke, who observes the scene with his sister, asks her: “How long is this going to go on for?” The implied answer is, in this case, the right one: too long, though that’s ostensibly part of the joke’s appeal.

The other part is just how proudly juvenile and silly “Psycho Goreman” is. Imagine a Troma movie, but without the goony anger or social conscience of founder/guiding light Lloyd Kaufman, or the usual horndog-placating, above-the-waist nudity. That’s “Psycho Goreman,” a sour comedy that never stops reminding us, often through Luke’s tinny dialogue, about how formulaic and incredible this sort of story is. No lessons are learned, as they joke at film’s end, but there’s a bunch of monsters hitting and/or disremembering each other, so presumably that’s enough to tick off most viewers’ boxes. I wish I enjoyed watching a fine, but unremarkable cast dig into dialogue that feels like an otherwise lazy mashup of sitcom and sci-fi tropes, like when Psycho Goreman learns to say “frig off” as his catchphrase after Pandora tells him that he “will not stand between me and my holy destiny.” I guess “hasta la huego, babe” was too on the nose.

I have to admit, I’m mostly disappointed by “Psycho Goreman” because everything in it is up proverbial alley, from the critique of action-figure-friendly superheroism to the nuclear family gone ballistic power dynamic of Luke and Mimi’s family. I just wish that the movie was either funnier and/or more focused on a scene-to-scene or joke-for-joke level. There’s some funny ideas here, like when the kids’ dad Greg (Adam Brooks) receives a pestering, urgent psychic distress call from PG while Greg tries to use the toilet. But the execution of this gag is so characteristically flat and uninvolving that I often wondered what the point of this genre exercise was, apart from being the cinematic equivalent of a geeky mood board. I theoretically understand the appeal of “Psycho Goreman”—I just didn’t see it on-screen. 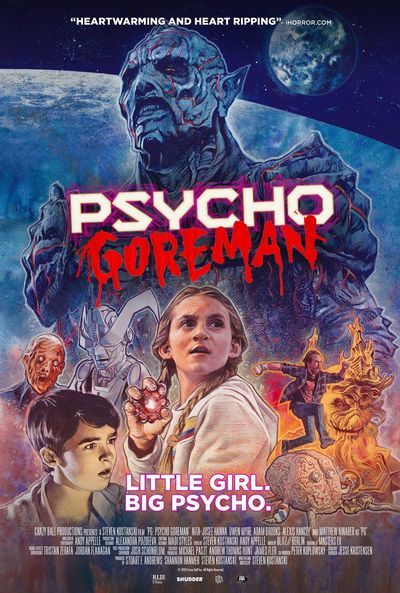