To call something “a real Russian movie” might be a peculiar kind of honorific in these times. But the dank, mordantly funny, thoroughly saturated, well, Russian-ness of the remarkable “Petrov’s Flu,” written and directed by Kirill Serebrennikov from an as-yet-to-be-Englished novel by Alexei Salnikov, is one of its signature qualities.

It begins ordinarily enough: on a bus, in not-quite present-day Russia, a man named Petrov is sniffling and sneezing. The image is a very wide widescreen, the 2.35 to 1 aspect ratio some of you may recall from Tarkovsky’s “Andrei Rublev.” (Yes, I know the ratio was not unique to that film but indulge me.) The bus is very crowded and the man’s coughing and sneezing does not endear him to his fellow passengers. Someone among them starts complaining about how Gorbachev sent the country to hell. Soon a mentally disturbed older woman, in the remnants of a festive costume that included a blonde braided wig, starts yelling about how everyone needs to cough up their fare. Poor Petrov seems to be only trying to get home, wherever that is.

In a bit, a van cuts off the bus, and stops it. The back door opens and an animated man with a bald pate beckons Petrov to disembark from the bus and join him in the van, the back part of which has a coffin in it and is heavily decorated with roses. Once Petrov’s inside he’s shown the fancy lighting system for this not-quite hearse. His host, Igor, wants to take him visiting. Where?

Well, that’s the question. Lest you take my four-star review as high praise intended for a general audience, I need to clarify. This very Russian movie is wholly phantasmagoric and non-linear, which is to say hard to follow. The experience is more like an interactive jigsaw puzzle than anything else, if you can imagine such a thing, and by the end you’ll not be sure whether all the pieces were finally put into place anyway.

In one synopsis of the movie I’ve read, Petrov is described as an auto mechanic. In another, as a comic book artist. I believe in the reality of the film he’s the latter, but I can understand why people might be confused. This is one hallucinatory flu, the extent of which you may not fully appreciate until the end credits when you see that each of the amazing actors in this, all unknown quantities in the States, plays multiple roles in this undulating, expansive universe.

As Petrov (Semyon Serzin) wanders through his interiority, his estranged wife Petrova (Chulpan Khamatova) experiences her own endless stress. Working as a librarian, she’s obliged to stay late on Poetry Night, and when one of the participants blows a fuse, Petrova’s eyes go black, like Ray Milland’s at the end of “X: The Man with X-Ray Eyes,” and she develops superpowers that allow her to bloodily wallop the offender. In the meantime, their son has a very real fever that causes them great concern. But the son is hell bent on going to a New Year’s Dance, and Petrov is determined to bring him. In a 1.37 frame, Petrov remembers his own experience of a New Year’s Dance, and how the young woman portraying a Snow Maiden, wearing a wig with blonde plaits, took his fevered hand and told him how hot it was, while he now remembers the snow maiden’s hand as icy.

In the movie’s final third, the format moves to a beautiful widescreen black and white, telling the story of a young actress, who wears a sweater from the same pattern that an older work colleague of Petrova’s is knitting in the present day. Her tale is of love, unwanted pregnancy, and being coerced into portraying the Snow Maiden at a New Year’s Dance.

There’s also bloody assisted suicide, squelched literary ambition, sublimated and not sublimated homosexuality, arson, and a lot of drinking. All of it staged and shot with conscientiousness and ingenuity rarely seen in films from any country anymore. It is indeed a phantasmagoria, and perhaps an overload. The esteemed critic Todd McCarthy compared the experience of watching it to “having a load of garbage jammed down your throat and piled on top of you until you just can't take it anymore.” I suppose that’s one way of looking at it. The garbage is cultural detritus, memory, nostalgia, hopelessness, a system that never worked and never will work. The characters here don’t really have a choice insofar as “taking it” is concerned. At the film’s finale, Petrov, still ill but finally alone, simply opts to go on. 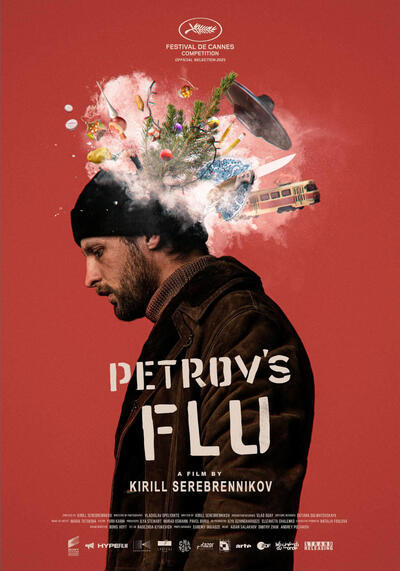