I have never attended a live ballet performance. I blush to admit it. But it's true. I have in my time attended functions where women danced about on a stage, but I did not confuse them with ballet. Nor wanted to. My ignorance of ballet is based on deep-seated cultural and class prejudices absorbed during my central Illinois childhood: The same forces that sent me panting to the Princess Theater on Saturday afternoons with a dime in my hand made me disinterested in ballet.

Ballet had something to do with the activities of the Fauntleroys who sported about in Thelma Leah Ritter's Dance Studios, which were located upstairs over the Princess Theater. From time to time during quiet scenes in the movies, we could hear them thumping about overhead, and we felt nothing but pity. Pity, and contempt, and hatred, and...well, if you've read any of Booth Tarkington's Penrod stories you'll know how we felt.

I make this confession at this time because I fully expected not to like "Peter Rabbit and Tales of Beatrix Potter." It is a series of animal tales from the works of Beatrix Potter, a strange Englishwoman who was a little crackers, according to the latest biography, but wrote charming children's stories. The stories are told in dance and pantomime by the Royal Ballet, and the sound track is all music. I thought perhaps four minutes of this ought to be enough for me.

Curiously enough, I stayed and even enjoyed the film. I still would have testified it was too highbrow for kids, though, because as a kid it would have been too highbrow for me. I was programmed against ballet and that was that. Fortunately, I took along three kids who hadn't been told they didn't like ballet and therefore didn't know that they were supposed to have a bad time. They had a good time. They were 7, 6 and 4 years old, and among the three of them there were only two expeditions to the john (both by the 4-year-old, and one of them a spurious excuse to look for the candy counter).

The stories are told simply and directly and with a certain almost clumsy charm. Instead of going for perfection in the dancing, the Royal Ballet dancers have gone for characterizations instead. The various animals have their quirks and eccentricities, and they are fairly authentic: The frog dances like a frog, for example, and not like Nureyev.

There are a couple of bad moments for the literal minded, I suppose. Take the scene where Jemima Puddle-Duck is trying to lay an egg. Mr. Fox has in mind the possibilities of preparing Jemima with a sage and onion stuffing, and after Jemima delivers herself of the egg, there is a touchy moment when it just misses becoming an omelet. This kind of confusion between animal-as-character and animal-as-food is a little disquieting; if Jemima Puddle-Duck had eaten the omelet, would she be guilty of incestuous cannibalism? (Movies are getting so perverted these days!)

In any event, I think I can fairly report that your children will enjoy "Peter Rabbit," and that you will too, especially if you live in the affluent middle-class white communities near the Hillside, Lincoln Village and Highland Park theaters. If you happen to live anywhere else in the city or suburbs, the movie is unfortunately not booked anywhere near you. Hardly any family movies ever play the South or West Sides; action and violence are shown in those neighborhoods. Now the entire inner city, including the Near North Side, Rogers Park, Hyde Park, South Shore and so on, are considered off limits for high-quality family fare, I guess. It could be that the kids of the urban core (black and white) could use a little whimsical fantasy once in a while, wouldn't you think? I mean, a kid's a kid, right? 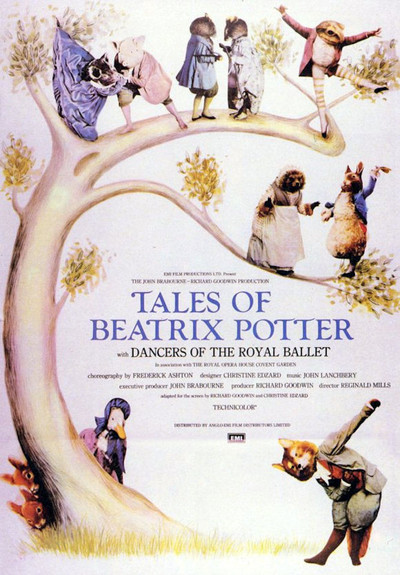