There was a time when traditional TV advertising simply meant more than it does now. Yes, young readers, in the days before DVRs and streaming, ads made a real impact not only to the bottom line of shareholders but to actual pop culture. They shaped trends, fashion, and even vocabulary, sometimes even defining what people considered cool. While Pepsi always trailed Coca-Cola when it came to market share, they were undeniably ahead when it came to what young people thought was cool. Coke commercials had animated bears; Pepsi had Cindy Crawford. Pepsi tapped into the “TRL” Generation, and they upped that dominance of the youth market in 1996 with a campaign called “Pepsi Stuff,” wherein drinkers could turn their caffeine addiction into actual products. It was an early version of the prevalent rewards systems provided by so many companies today from Starbucks to Chipotle. And Pepsi launched it with an ad that, well, got them into some serious trouble. The entertaining, four-part Netflix mini-series “Pepsi, Where’s My Jet?” not only playfully unpacks the details of what went wrong but digs deeper to get at the core of why false advertising matters. If no one holds an advertisement to its word, it has no value.

John Leonard was in college in 1996, trying to figure out what he wanted to do with his life. The confidence of Pepsi’s advertising spoke to Leonard, and so he loved the idea of the “Pepsi Stuff” campaign, but he was most captivated by the final shot of the commercial announcing it. In the commercial, a teen who reminded Leonard of himself shows off products earned with Pepsi Points before getting into a Harrier Jet on his front lawn above a caption that claims that this flying machine is available for seven million points. There’s no disclaimer. Pepsi would try to add one later and try to up the amount to a more unreasonable number, but it wasn’t there when Leonard saw it and wondered if he could actually get that many points. He contacted a wealthy buddy named Todd Hoffman to see if he could help finance and facilitate the project, which turned a corner when Leonard noticed in the fine print of a Pepsi Points catalog that points could be directly purchased, and the cost of seven million points didn’t come close to the actual value of a Harrier Jet.

At first, Pepsi thought Leonard & Hoffman were kidding. Who could have possibly thought that Pepsi was legitimately trying to give away a military-grade fighter plane? And director Andrew Renzi smartly assembles the major players on both sides, including the designers of the ad campaign and the executives who clearly still harbor some resentment over how a kid in Seattle ended up putting them in law books around the world. Of course, it wasn’t long before lawyers got involved. Pepsi even sued Leonard first, a bold move to get a favorable NYC arena that would be better to big business. And then Leonard got a future familiar face involved in the one and only Michael Avenatti, interviewed under house arrest for wire fraud and identity theft. Some of the most remarkable interview footage in the four-hour series concerns when Avenatti gets dumped into the chaos. Let’s just say that some of the major players, including the very likable Hoffman, have some choice words for the man who will always be associated with Stormy Daniels and Donald Trump.

Netflix has a habit of stretching ideas well past their breaking point, turning something that could maybe be one episode of “20/20” into a mini-series. I presumed that would be the case here, but Renzi keeps the entire thing lighter on its feet than most Netflix docu-series. It’s got a playful spirit that matches the Pepsi ad campaigns of the era with pop music from the ‘90s and even fun bits like making every interview subject take the Pepsi Challenge—a blind taste-test of Pepsi and Coke. Renzi is clearly an ace interviewer, and it helps a great deal that Leonard and Hoffman are just remarkably likable (even if Pepsi would disagree).

But the series is elevated most of all by the serious issues it explores. First, it feels like the Leonard/Pepsi drama was one of the first events to make companies as big as the soda giant understand their responsibility when they pretend to sell more than just a product. Now, companies interact with irate or excited consumers on social media, but that didn’t happen in the ‘90s, which created more of a firewall between executives and customers. And “Pepsi, Where’s My Jet?” takes what could have been a quirky anecdote and gets into how false advertising can be dangerous—a chapter about a Pepsi ad drama in the Philippines is fascinating (and actually could have been much longer). Should Pepsi have been held to their Harrier Jet promise? It was probably a bit unrealistic to ever think they would be, but companies need to be careful about the promises they make. When a company like Pepsi pretends to sell more than just a drink, they have a responsibility around the messages they send. “Pepsi, Where’s My Jet?” really captures a company that was trying to turn their irreverence into profit, flying high on their own success, never thinking about where they might land.

On Netflix on Thursday, November 17th. 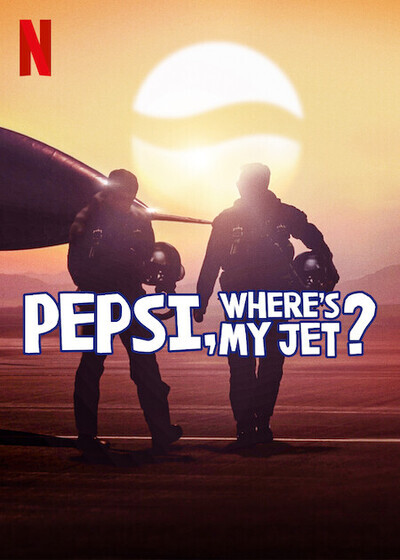