There's a morbidly hilarious dark comedy buried not-so-deep inside the lousy revenge thriller "Peppermint." It's just probably not the movie that director Pierre Morel ("Taken," "District B13") and screenwriter Chad St. John intended to make. In "Peppermint," a newly-widowed mother seeks revenge on the cartoonishly evil Latino drug-dealers who killed her husband and young daughter. This generically traumatic event sets former bank employee Riley North (Garner) on a rampage despite glaring psychological trauma that she refuses to treat (she's prescribed Lithium and anti-psychotic medication, but doesn't take them). Riley's instability is so prominent—represented periodically through sped-up, out-of-focus, and over-exposed subjective camera-work—that nobody in a position of power believes her when she says that she remembers the faces of the three men who killed her family.

Still, moviegoers are supposed to root for Riley because her husband and daughter's killers—a bunch of joint-smoking, booze-drinking, gun-toting monsters—are still on the loose, and the system is rigged, and other complaints that were made before (though not necessarily better) in the 1980s by lackluster sequels and ripoffs to "Death Wish." Somebody's got to pay, even if Riley's PTSD-like breakdowns suggest that she probably shouldn't be venting her spleen by murdering every complicit and therefore ostensibly deserving person she can. But again: "Peppermint" isn't a critique of Riley's privilege. She's just a white woman whose sole purpose is railing against a broken justice system and slaughtering a group of stereotypically ruthless Latino gangsters who literally work in a piñata store (as is announced three times during a news report within the film). How is this not a black comedy about our troubled times?

The producers of "Peppermint" may be French and Chinese, but the film's heroine still (unintentionally) exemplifies an ugly strain of contemporary American thought that insists that you are the one who is really being bullied if somebody tells you that you are bullying them. You don't even need evidence to support your counter-claim. Just look at all the ways that Riley's creators excuse their decision to use racist caricatures as straw men antagonists.

Riley's actions are supposedly justified by her self-image as a working class martyr. She's not as rich as Peg (Pell James), a snobby rival mother who, during a flashback, tells off Riley and her daughter Carly (Cailey Fleming) by saying that they aren't real Girl Scout material. But we're supposed to think that Riley's anger speaks for Los Angeles' fed-up, disenfranchised residents, as we see based on a flurry of tweets (showcased during the cops' official investigation of Riley's crimes) and one wall mural that's erected in the "Skid Row" part of town (identified as such by a Google Maps-like search, also during a police investigation). Riley's an underdog since she's fighting untouchable crook Diego Garcia (Juan Pablo Raba), a high-powered crime boss who's protected by an LAPD mole, a high-powered lawyer (Michael Mosley), a corrupt judge (Jeff Harlan), and dozens of gun-toting heavies. So it's up to Riley to do what a corrupt system won't: the exact same things that were already done by Frank Castle, Paul Kersey, Harry Callahan, John Rambo, the Duke, the Boondock Saints, and everyone else in the pantheon of Red-Blooded American Avengers.

The only problem with cheering Riley on is that there's more evidence to suggest that she's a highly effective (but also kinda goofy?) monster than there is proof that she's an antiheroic voice of the people. Riley threatens Peg at gunpoint until James' character urinates all over herself. She also stabs Harlan's character and then blows him up. Riley also carries a gun that's about at least half of Garner's size. When she breaks into Garcia's home, she stalks her prey like Steven Seagal at a buffet table, hoisting her gigantic rifle in front of her like a, well, you get the idea.

Almost everything about Riley's backstory and circumstances should make her seem more sympathetic. Unfortunately, Morel often seems more desperate than eager to please. In a flashback, we see that Riley's boss hates her, and made her work late on her daughter's birthday. Mere days before Christmas, at that! How could you not root for Riley, whose husband (Jeff Hephner) is asked to participate in a crime, but is so innocent that he backs down moments before so he can spend time with his family, making his death that much more tragic? And again, just look at the bad guys she's fighting! Garcia's men are defined by their tacky surroundings, whether it's the Las Vegas-chic (marble tiles and glass decanters) of his home or the Grim Reaper-like Santa Muerte effigy that ostentatiously looms over his various warehouses.

Morel also tries to preempt accusations of racism by making the two cops and an FBI agent that investigate Riley's case—played by John Ortiz, John Gallagher Jr., and Annie Ilonzeh—a racially integrated and gender-balanced group. And don't get me started on the inevitable unmasking of the double agent who's secretly working for Garcia. Ortiz even delivers an unbelievable line about how "the difference between [the cops and Garcia's men]" is that the cops should care while the criminals simply don't.

All of this pitiable self-victimization is significant to the film's plot and message, but probably not in the way that Morel thinks. His lip service apology for the film's inherent sketchiness doesn't justify the icky spectacle of Garner shooting and stabbing her way through a legion of stick figure villains, but rather suggest that the film's heroine is unwittingly perpetuating the same imbalanced system of power that she's railing against, no matter how many dead family members, and POC allies have her back. "Peppermint" is kind of funny, but never intentionally. 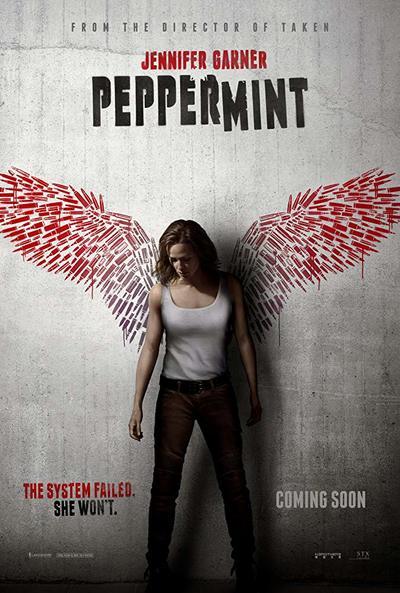