It’s been only 12 years since the great tenor Luciano Pavarotti died of pancreatic cancer, too young at the age of 70. Since that time, the landscape of music, and of music marketing, two fields in which he was an undeniable giant, has changed so drastically as to be unrecognizable. Even if lyric opera isn’t your taste, you’d be hard-pressed to deny that the void Pavarotti left in terms of worldwide exposure of classical music has not yet begun to be shoveled in. Ron Howard’s documentary doesn’t just make you miss the singer. It makes you miss, of all things, a robust music industry.

There’s nothing groundbreaking about this documentary. It is a straight-down-the-line talking-heads-and-archival-footage deal, and it does not take any interesting annotative digressions. The film opens in the Amazon, in 1995. Travelling through the rain forest up this river, Pavarotti, after a South American engagement, asks to be taken to the Amazon Theater, an opera house in Manaus, where Caruso once sang. That this venue was also featured in Werner Herzog’s “Fitzcarraldo,” in a scene where the title character travels to witness Caruso there, is not mentioned.

The chronology is more than respectful, it’s affectionate, and it’s pitched to an audience that may not be familiar with opera grand, lyric, or comic. Laying out the singer’s most famous roles, the movie gives brief textual accounts of the plots of “La Boheme” or “Tosca.” After a tidy account of his early life, Pavarotti himself is heard describing his love-at-first-sight meeting with his first wife Adua Veroni. Their marriage produced three daughters in less than five years, and while Veroni provided the financial support for his early career, their family life in that time seems joyful. When his career takes off in the early ‘60s, the joy increases, but so does the travel.

Adua and her three daughters are impressive, attractive people: intelligent, composed, articulate. They have a more profound experience of separating the art from the artist than most of us ever will. In this case, the artist is not a bad or perverse actor. Pavarotti’s kindness, generosity, wit, and compassion were staples of his personality, not occasional handouts. But the discipline of being this kind of singer, and the grueling travel, create a situation in which authentic family life is at best a fondly held dream. The Band’s Robbie Robertson described the road as “a goddamn impossible way of life.” More success and more money and more accomplished business people made the road “possible” for Pavarotti, but only just.

The acceleration of the career is as fascinating to watch as the artistry is moving to hear. Pavarotti seems a fellow without an ounce of calculation in him. Nevertheless, watching the footage of the very first performance of The Three Tenors, an amalgam Pavarotti formed with Placido Domingo, Jose Carreras, and conductor Zubin Mehta, you can’t help but think, during their group hug after one of several ovations, that at least one of these guys is thinking, Carl Denham style, “We’re millionaires fellas! I’ll share it with all of you!”

That said, Pavarotti’s contributions to the world of charity, begun in the last third of his career, were entirely monumental, and coincided to an extent with scandal, new love, and a new family. As upset as Luciano’s betrayals made Adua, she still clearly holds him in great esteem. It’s almost impossible not to.

Howard indulges the occasional hack move; when Adua observes that at the height of his multiple-assistant male divadom, Pavarotti could have demanded chicken milk and someone would have found a chicken and tried to milk it, he cuts to a shot of a Dramatic Hen. Someone recalls Pavarotti’s childhood bout with tetanus and he throws in fake-scratchy black-and-white hospital footage. Sometimes less is more, but this kind of more isn’t egregiously abused.

You are probably wondering something. And yes, you’re not going to believe it. The fact that the movie declines to so much as MENTION “Yes, Giorgio,” Pavarotti’s disastrous 1982 Go Hollywood move, a severely misjudged romantic comedy in which he starred with Kathryn Harrold, is pretty funny. The movie was a glitch in a great career, not a blotch, and I’m sure Harrold has some stories. It’s unusual for a movie to commit such sins of omission on the artistic side of the scale rather than the personal. But each to his own form of hagiography, I guess. 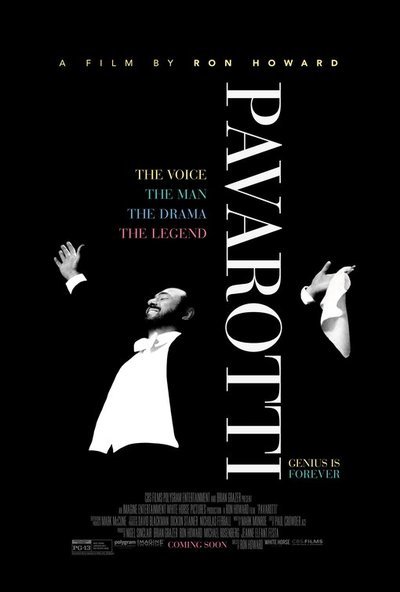 Luciano Pavarotti as Himself (archive footage)