On the Internet Movie Database, the plot synopsis for Argentinian drama "Paulina" is appropriately curt: "A young woman is raped by a gang." This is a fitting precis since the film feels like, in many ways, a corrective to dramas that use sexual assault as a key plot point. For example, while "Paulina" is not sensationalistic, it does show an act of sexual violation. There are also clear heroes and villains in this story, and no attempt is made to completely absolve the guilty parties of their responsibility. Instead, director Santiago Mitre and co-writer Mariano Lilnas try to get us closer to understanding rather than glibly judging any of the characters involved. This is no small feat given how many times "Paulina" feels like a civics lesson first, and a drama second.

Much of the film's outlook aligns with the perspective of Paulina (Dolores Fonzi), a former law student who chooses to move to teach social science in a small town. Paulina's decision to leave behind a prosperous career makes her a target for skepticism both from her conservative father Fernando (Oscar Martinez) and her sympathetic-but-disengaged boyfriend Alberto (Esteban Lamoth). These supporting characters are largely, but not exclusively defined by how much they roll their eyes at Paulina. Fernando and Albert worry, challenge, and yes, emotionally manipulate Paulina for the sake of winning her over. These are complex characters that actually talk like human beings instead of mustache-twirling accessories to a crime.

Likewise, Mitre and Lilnas take time to introduce Ciro (Cristian Salguero), the angry young student who leads a group of friends to rape Paulina. His story is, thankfully, a sub-plot that is only introduced after Paulina is attacked. Ciro's back-story also does not humanize his actions so much that he is presented as a sensitive soul worthy of canned redemption. Instead, we see him as a real person who with real problems and flaws. Ciro works at a lumber mill. He is quick to anger. He draws in his notebook. And he is sexually frustrated. I won't give too much away, but when he sees Paulina, an inner conflict comes to light. It's something that isn't easily explained away, but his actions are at least semi-contextualized.

As for Paulina: her story lives and dies based on the strength of the conversations that she has. She knows who raped her, but she doesn't know what to do about it. Paulina's story comes to a halt after she's raped since the remainder of the drama concerns her uncertainty about how to move on. She talks and is helped considerably by women, like her aunt, and the female rape crisis counselor who provides medication without any unnecessary commentary. But she is judged as a "victim" by all the men she encounters, a heavy-handed verdict that male creators Mitre and Lilnas carefully try to avoid. In fact, Mitre and Lilnas sometimes back off too much, and over-use expository dialogue to reveal what Paulina is thinking and feeling.

But even that complaint feels minor given how refreshing it is to watch a drama that is about a difficult subject that doesn't baby viewers, nor completely devolve into hippy-dippy "why can't we be friends" sermonizing. Violence stings in this film, as we see when Ciro rapes Paulina, or when Ciro attacks some of his friends. These scenes do not revolve around fetishistic close-ups, which is both a commendable and a glaring omission. On the one hand: finally, an adult take on sexual violence. On the other: it feels like Mitre committed to filming violence without having anything to say beyond a general acknowledgment that these events occurred, and therefore cannot honestly be avoided.

"Paulina" is, in that sense, worth seeing, even if its basic plot repeatedly stalls. It is a thoughtful movie, but not necessarily a fulfilling one. There's no cheap catharsis, or resolution for the viewer. There's also not a lot to emotionally engage with during multiple scenes where Paulina mulls over her options. Still, there ar some subtly moving performances, and righteously indignant speechifying. There is a lot to like about a movie where a woman gets to passionately, and eloquently explains why she is the mistress of her own destiny. I just wish that the humanism that Mitre, Lilnas, and their collaborators exhibit throughout "Paulina" were consistently engaging on a basic storytelling level. 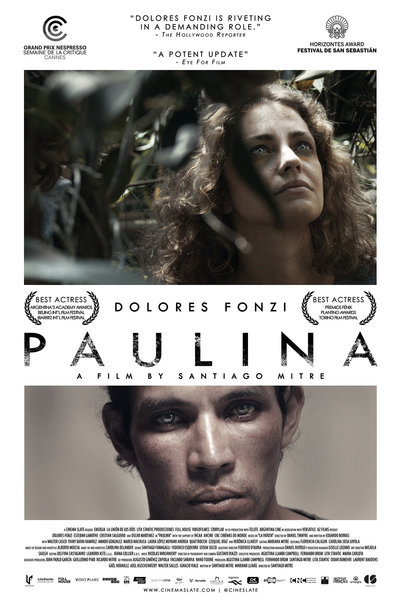 Writer (based on an original screenplay by)