You can tell an Ulrich Seidl film by its rigorous form and seemingly digressive improvisations. It's like a corral with mathematically precise iron gates that herd a human menagerie into striking configurations. The previous two sentences are the high-toned kinds of things critics have been writing about Seidl's work since his early breakthroughs "Models" (1999) and "Dog Days" (2001), so I figured I'd get it out of the way.

"Paradise: Hope" is the final film in Seidl's "Paradise" trilogy, after the blindingly beautiful, wise "Love" and the quiet storm of "Faith." The subject of "Hope" is Melanie (Melanie Lenz), the 13-year-old daughter of the first film's protagonist and niece of the second film's subject. All three episodes are about an Austrian woman (in this case a budding woman), seeking fulfillment in a partner. Melanie's mother sought affection and appreciation from Kenyan boy toys. Her aunt sought it in the arms of Jesus. And now Melanie seeks an outlet for her surging sexual curiosity, finding a candidate even less appropriate than impoverished Africans or a Christ statue: The director of her weight loss camp, a doctor at least 40 years her senior.

Which reminds me to mention another high-toned thing you'll hear from critics about Seidl: He's a provocateur who traffics in shocking, embarrassing and emotionally taxing situations. His characters pursue happiness right into traps set by cruel, duplicitous exploiters, or, worse, by such disadvantages as aging, obesity, disability and poverty. These films are described as grueling endurance tests, "not for the squeamish."

We live with a culture that can stare unblinkingly at grisly murders, Ultimate Fighter concussions, all manner of petty, bloody cruelties, so long as they are packaged as entertainment or certified as high art. What seems to inspire all the hand-wringing advisories about Seidl's relatively non-violent films is the way their protagonists refuse our pity while his camera refuses to look away from everyday realities we've been conditioned to find pathetic or distasteful. In "Love," Melanie's full-figured, middle-aged mother, Teresa, strode onto a Kenyan beach in a bathing suit, inviting cringes from viewers who couldn't imagine anyone seeing her as beautiful or desirable. In "Faith", Melanie's aunt Anna Maria seemed a spinsterish Jesus freak, clinging to her faith in lieu of getting a life.

What those reponses miss is how often Seidl shows Teresa to be radiantly beautiful, in her blushing anticipation and curiosity at first; her woozy afterglow when she's finally scored what she believes is a foreigner who sees into her heart. Similarly, we learn that Anna Maria is no holy fool, but a woman with a past as full of physical pleasures and emotional disappointments, a past so turbulent that it drove her further into her faith as a refuge. And both women prove as capable of cruelty and ignorance as they are of tenderness and insight. Seidl's camera always stands back to let the women's environments and their orientation within them tell their stories in a way that can inspire compassionate recognition. (The cruelty and condescension many critics impute to Seidl seems more like projection.)

"Hope" lavishes the same rigorous attention on a chubby girl at fat camp. Melanie's accelerated coming of age happens against a backdrop of strictly regimented camp life, a series of exercises, chores, excursions and physical exams that Seidl frames the way one might photograph a factory assembly line. Seidl's masterpiece, "Import Export," found gentle comedy in the way his young heroine walked to her dreary job over dingy snow, past ugly Ukraine smokestacks, dressed like a glam snow bunny. Seidl is fascinated with the little ways people decorate their lives to reflect the brighter future they are toiling for within a rigid system that both promises that future and continually denies it. In "Hope," Melanie and her fat-kid friends perform drills best suited to stoic Marines, arrayed in Seidl compositions as orderly as the kids are endearingly sloppy and listless. The white-and-beige walls of this place seem as uninspired as the staff. Yet these middle schoolers find ways to sneak in booze and music for classic spin-the-bottle parties. They are secretly, defiantly alive in a dead place.

When Melanie falls under the spell of a silver-haired pedophile as tall and trim as a Marine (Joseph Lorenz), the film gets set on its rocky path to a conclusion that fulfills the film's title and rounds out the "Paradise" series quite beautifully—if you're not afraid to look. 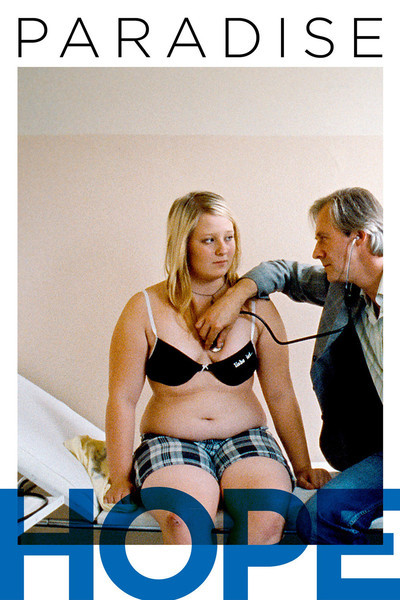