Wicked or wussy: Which witch is worse?

You can be a good witch or a bad witch or even a little of both, but a bland witch?

Then we'll have to talk.

Some of the surprises in "Oz the Great and Powerful," the much-anticipated "The Wizard of Oz" (1939) origins movie, are delightful. Others, however, sink the movie just below the point of recommendation, with the primary drawback falling on the lovely shoulders of Michelle Williams and Mila Kunis, as early versions of Glinda the Good Witch and the Wicked Witch of the West, respectively.

Williams is already established as one of the better actresses of the last decade. Kunis is a star on the rise. What a disappointment, then, to see Williams so bland and sugary as Glinda, and Kunis so flat and ineffectual as the heartsick Theodora, who is transformed into the broom-riding, theatrically cackling, very Wicked Witch of the West.

Margaret Hamilton's Wicked Witch in the original "Oz" was the stuff of nightmares for generations. Mila's Wicked Witch would get her first place for makeup at a Hollywood Halloween party, while her performance is closer to a Razzie than to an Oscar.

Only Rachel Weisz acquits herself well in a witchly role, playing Evanora, the scheming older sister of Theodora. (I believe Evanora's the one who will eventually find herself on the wrong end of a house in "The Wizard of Oz.")

Like "The Phantom Menace" trilogy, "Oz the Great and Powerful" precedes a beloved classic on the fictional timeline but makes full use of modern-day technology, which means everything's grander and more spectacular, and there's not an obvious soundstage scene or a cheesy special effect in sight. Director Sam Raimi and his army of special-effects wizards have created a visually stunning film that makes good use of 3-D, at least in the first hour or so.

But is that really a good thing? The magical cities (for the most part) and the Oz-dwelling creatures, including a talking monkey and a cute-but-also creepy talking China doll, are of course the stuff of CGI. We can picture the actors pretending to cuddle the little doll or banter with the monkey. It might have been more interesting if Raimi had attempted to shoot an "Oz" prequel using only the tools available to Victor Fleming and King Vidor in the late 1930s. (Raimi does pay tribute to the past by framing the earth-bound prologue in the old-timey Academy ratio, switching to CinemaScope scale only after we've landed in Oz.)

James Franco has turned much of his adult life into performance art that feels equal parts sincere and con game, and it would seem he'd be well cast as Oscar Diggs, a small-time illusionist and unabashed serial liar working the dusty back roads of Kansas in 1905. The problem is, Franco's a lot more believable playing slimy than sincere, and the part requires him to do both. It's a steady but less-than-captivating performance.

(There is a brief nod to Judy Garland's Dorothy Gale character when Williams, playing Oscar's former sweetheart, shows up to tell him she's marrying a man named Gale. Is that Dorothy's future father?)

Of course Raimi films the reality-based scenes in black and white, and of course he flicks the switch to brightly popping colors once Oscar lands in Oz, having used a hot air balloon to escape the wrath of a circus strongman.

When Oscar regains consciousness, we're assaulted by an admittedly impressive but sometimes overwhelming visual explosion of LOUD colors and magical creatures that might have cousins on Pandora. Iconic touchstones such as the Yellow Brick Road are almost afterthoughts.

Zach Braff, who plays Frank, Oscar's underappreciated right-hand man in the Kansas scenes, also voices Finley, Oscar's loyal monkey sidekick in Oz. Finley's not Jar-Jar Binks appalling, but he's pretty annoying, mostly because he seems like he fell out of a "Shrek" movie.

Sympathy goes to the screenwriters, who had to steer clear of legal issues so as to not offend the trademarked facets of "The Wizard of Oz," produced by MGM and now owned by Warner Bros. Maybe that's why the Munchkins sing only one, forgettable, abbreviated number, and the henchmen bellow something that sounds like "Oh-Eee-Oh" but isn't quite the same.

Much of "Oz the Great and Powerful" centers on Oscar's transformation from me-first slickster to the Wizard of Oz, aka Man Behind the Curtain. With Oscar relying heavily on the inventions of Thomas Edison, his hero back on Earth, to pull off his biggest trick ever, "Oz the Great and Powerful" finally breaks free of its beautiful but artificial trappings and becomes a story with heart in the final act.

Thing is, we know Oz and its wizard and those witches and the Munchkins are destined for a far greater adventure a little ways down the Yellow Brick Road. The landscape won't be as amazingly gorgeous and the witches won't be able to fly about and hurl fireballs with the ferocity they display here, but it will be a much more magical adventure all the same. 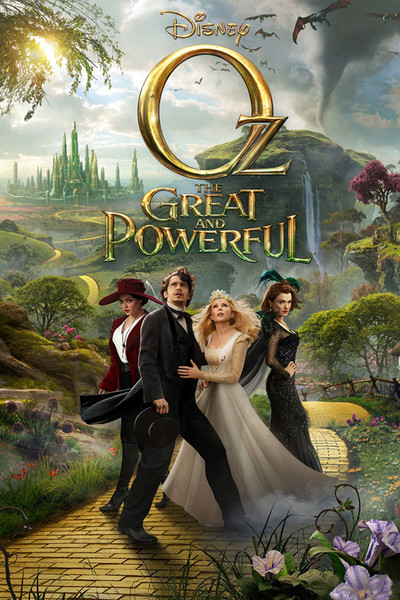 Rated PG for sequences of action and scary images, and brief mild language

Abigail Spencer as May