Ovid and the Art of Love

Proving that strict period details are not a must when it comes to visual storytelling, “Ovid and the Art of Love” is shot in modern Detroit but takes place in 31 BC Rome. You can tell the time period by the costumes, but not the language, even if it’s all about the poet Ovid and his famous writings about love. It's a confident conceit that works, because when biopics entertain you with a unique approach like this one, the wild anachronisms only make the film pop more.

Written and directed by Esmé von Hoffman, "Ovid and the Art of Love" tells the story of Ovid (Corbin Bleu) in a manner that's accessible, and familiar (but not for kids, as the content of love, sex, and amount of cussing indicates). He’s a young man who dreams of becoming a “practical poet,” after diverging from a path to become a part of the system, or in this case a senator. Bleu is charming as Ovid, who riles up audiences with his poems about men, women, and sex, an act of rebellion against a conservative empire that distracts from its failures by imposing values the leaders don't privately follow themselves.

The story is given effective padding by intentional cliches—like how Ovid gets a spunky sidekick in glasses who brings in humor, or Ovid's parents, who just don't understand. And numerous scenes play out in an obvious way that keeps things light, like when Ovid meets Julia the Younger the persecuted granddaughter of the emperor Augustus (John Savage). As Ovid tries to be smooth to her while they sip from a water fountain, they have a tension that's straight out of a standard romantic comedy. This approach only really fails the movie toward the end, when Ovid and Julia are fighting for their lives and their people, all in a courtroom scene that lacks the triumphant power it clearly desires.

Taking all types of liberties with the true story of the poet, "Ovid and the Art of Love" lets the costumes transport us to a different time, instead of the backdrops. It’s clever, for example, how Augustus and his fellow people in power are hanging out in an abandoned building—a sparse, visually striking location, that also hints at how delusional they are about the glory of their empire. Or there’s the Olive Tree, the club where Ovid makes his big breakthrough and becomes Rome’s favorite poet. He delivers his latest verses surrounded by abstract paintings, performing for an audience with some people in period-appropriate clothing, and some not at all. There’s even a guy who hilariously roasts Ovid, and calls him a virgin—while wearing a backwards cap to go with his tunic.

It’s enough to make you wish that there was more imagination in the filmmaking, as the production ideas only get so far with some flat coverage of these scenes, or editing that still needs some smoothing (not just because the film could stand to be shorter). And it reminds you even more that while characters and situations are engineered to more recognizable, it’s the production design that has more edge than how it's all being told.

But spirit genuinely goes a long way for an ambitious movie like this, and “Ovid and the Art of Love” has it. Sometimes it's too corny for its own good, but it believes deeply in its own take on the historical figure, and effectively layers 31 BC Rome on top of contemporary Detroit. This is not a purist's handling at the classics, and yet it never wants to be. Instead, “Ovid and the Art of Love” has some of its own fun getting the word out. 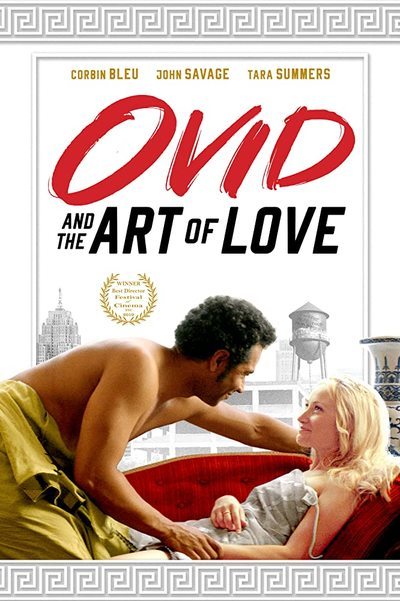 Tamara Feldman as Julia the Younger