I'm trying to imagine what it might be like if I were a budding 14-year-old horror fan sneaking into the totally adequate WWII-set monster movie "Overlord." This high-concept historical chiller—good guy American soldiers vs. bad guy Nazi super-soldiers!—delivers just as much cursing and bloodletting as its R-rating seems to promise. Kids today still like cursing and gore, right? I hope so, because that's the best "Overlord" has to offer, save for some sketchy ideas about the main differences between Us and Them: humanity and brutality, assimilation and occupation, yadda yadda yadda. Realistically, "Overlord" is a simple mechanism to deliver squib packs and swear words, a function that the film's creators accomplish despite their otherwise unremarkable story's choppy pacing and general humorlessness. If my nephew were old enough to watch, let alone sneak into this movie (he's only two years old, alas), I'd definitely buy him a ticket and then disappear for two hours so that he could enjoy himself without his Uncle Creepy, I mean creepy uncle lurking over his shoulder.

Let's face it: "Overlord" wasn't made with me, a jaded 30-year-old horror fan, in mind. That's just fine: today's bloodthirsty youth will inevitably fall in love with unabashed, rot-your-teeth splatter films, so why not this overstuffed, under-developed homage to lurid EC Comics series like Two-Fisted Tales and Tales from the Crypt. The formulaic nature of the film's story—scripted by Billy Ray and Mark L. Smith—is even, at times, sorta comforting: it's 1944, and a rag-tag group of American soldiers have suddenly plummeted into a small occupied French hamlet after their plane is shot to ribbons by enemy fire. Their mission—to take out a heavily fortified Nazi radio tower—now seems impossible given how few American soldiers are left standing. There are also no French resistance fighters to help them, only tough, but vulnerable French scavenger Chloe (Mathilde Ollivier) and her young brother Paul (Gianny Taufer). So it's up to U.S. to stop baby-faced Nazi leader Wafner (Pilou Asbaek) and a legion of goose-stepping baddies, almost all of whom speak the sort of basic German you might hear in the "Wolfenstein" video games, stuff like "Achtung!" and "Luftwaffe!" Our stock heroes are: wise-cracking explosives expert Tibbet (John Magaro); haunted Aryan-looking leader Ford (Wyatt Russell); naive shutterbug Chase (Iain de Caestecker); and conflicted audience surrogate/moral compass Boyce (Jovan Adepo).

"Overlord" works best when Boyce—an inexperienced recruit who can't bring himself to hurt a mouse during basic training—discovers a whole mess of Nazi zombie super-soldiers as he investigates the above-mentioned radio tower situation. I like this exploratory phase of Ray and Smith's doofy narrative, though it is really, really doofy. Boyce not only lacks survival instincts: he also doesn't seem to know when to stop unzipping leaking flesh sacks, peeking behind medical curtains, and injecting things in places where any sane (let alone combat-fatigued) soldier might say to themselves, "Hey, this is a bad idea!"

Boyce's inability to stop himself from blundering into glaringly dangerous scenarios is not just a character-driven trait either, but rather a sign of how reliant Ray and Smith's connect-the-dots plot is on aw-shucks bad decision-making. Witness: a key scene where Chloe pokes her head into a Nazi prison cell because, uh, she's desperate to find Paul? Seriously? She's so desperate that she's just gonna ... you know what, never mind.

Applying logic or any other high-minded standards to "Overlord" seems pointless given how superficial this movie is. There's some wispy ideas about how the Nazis' rumored last-ditch, end-of-the-war turn to spiritualism and the supernatural reveals their true colors: a superstitious pack of bullies who would do anything to keep you under their boot-heels. In fact: "Overlord" seems downright quaint given its brain-dead scenario's implicit reliance on super-strong Nazi zombies—who seemingly can only be put down by a shot to the head, and are only revived/fortified with a syringe of mysterious "Re-Animator"-style science fluid—to thrill modern teenagers, the kind who are probably more likely to torrent this film than to see it on a stories-tall IMAX screen.

That being said: I don't really know if a modern teenager (or a future teenager, like my nephew) will enjoy "Overlord." They might appreciate the film as a retro, high-end crowd-pleaser. Or they might roll their eyes at the film's patience-testing, thrice-warmed-over story beats, and basic characters. Modern teenagers could go either way on the film's biggest selling point: copious amounts of nasty, leaky, well-lit violence and monster make-up. No matter what they think: the youth of today will eventually grow up and learn to pick through my generation's metaphorical trash bins, which are already overflowing with Baby Boomers' and Gen X's hand-me-down junk. Still, if I was still an easily-distracted youth, I might enjoy "Overlord," if only during its 109-minute runtime. 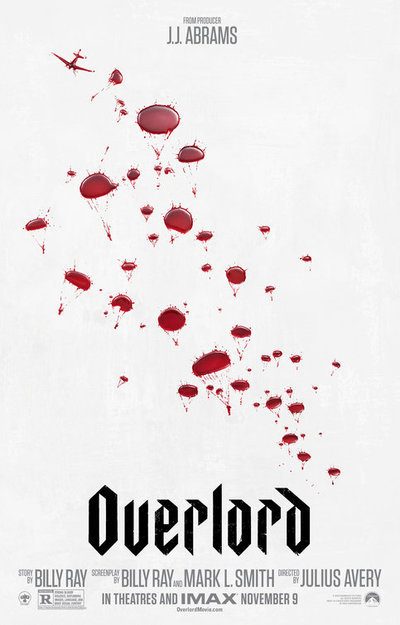