There's about half a movie in "Overcomer." The other half or so is a pretty half-hearted sermon. Neither half is particularly worthwhile, and the whole is cheap, cheesy, and, to put it charitably, churchy.

That's the method of director Alex Kendrick, who has helmed and, with his brother Stephen, co-written several faith-based movies. (The brothers wrote this screenplay, too). To call this one merely "faith-based" seems like an understatement, and to call it a "movie" feels especially generous.

It doesn't start that way, though. In fact, the first act of Kendrick's newest seems like a legitimate narrative. Indeed, it opens with a prologue (featuring a nifty drone shot that flies over some trees, through the window of a Christian high school and into the gymnasium, where a basketball game is underway), establishing a community on the brink of economic disaster. A nearby manufacturing plant is closing its doors and laying off most of the employees. The school's fate is in jeopardy, because most of the families have someone who works at the plant.

That's one setup established. Then, we get another, as teacher and basketball coach John Harrison (played by the director, whose performance certainly sells the idea that the filmmakers pulled a random high school basketball coach, with no acting experience but a genial personality, out of nowhere and put him in the leading role) is in a tough spot. With parents leaving town and students leaving the school, the coach's team looks ready to collapse.

Plus, the school's principal (played by Priscilla C. Shirer) wants him to coach the cross country team. John doesn't even think running is a real sport, and the only student who tries out is Hannah (Aryn Wright-Thompson), a transfer student whose parents are dead, who lives with her grandmother Barbara (Denise Armstrong), and, who, more pertinent to long-distance running, has asthma.

That's three narrative threads, right there for the taking: the coach who has something to learn, the student who has something to prove, and the economic insecurity of the small town threatening all of it. None of these threads is revolutionary by any measure, but they at least form the foundation of an actual story.

At some point, though, the Kendricks simply decide to abandon just about all of that. Through a chance meeting at a hospital, where John is visiting a fellow parishioner with his church's pastor, the coach just happens to discover Thomas (Cameron Arnett). Through some painfully on-the-nose dialogue during a later visit, John learns that Thomas, blind and having more health issues on account of diabetes, is actually Hannah's long-believed dead father.

Now, of course, there's the conundrum: Does John tell Hannah, or does he respect the wishes of Barbara, who has kept the fact that Thomas is still alive hidden from Hannah? It doesn't matter, because, even before he learns that his daughter is so close, Thomas begins the preaching, insisting that maybe John isn't the best Christian he can be. After all, John dares to list several other things about him and his life before he even thinks about calling himself a Christian.

Then, the principal gets into the game, proselytizing Hannah to reject her terribly sinful ways and become a Christian. There are three scenes in a row that exclusively show or climax with different characters praying, and Hannah's big training montage—which is to be expected, even when the movie seems to have abandoned everything but the sermons from the story—is intercut with her doing a Bible study.

Eventually, the Kendricks' screenplay gets back to the racing plot thread. Mind you, it's just for the Big Race (which we only learn is the state championship after it's finished), so it's more of a requirement than an actual story point. Even then, Hannah wears an earbud with her father coaching and, obviously, preaching to her. In theory, this is a rather clever way to make a lengthy sequence of a long-distance race involving, but in practice, it's just more sermonizing. 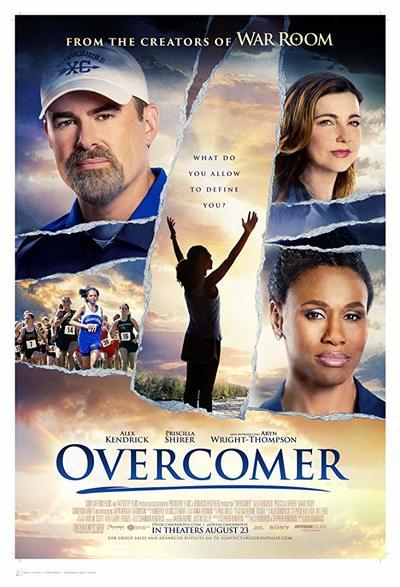