Ottolenghi and the Cakes of Versailles

In 2018, famous London-based restauranteur and cookbook author Yotam Ottolenghi was contacted by New York’s Metropolitan Museum of Art with an unusual proposal—create a display of elaborate pastries inspired by what might have been served up during the heyday of the court of Versailles for a one-day event as part of their then-current “Visions of Versailles” exhibit. He agreed and as plans came together for the big day, filmmaker Laura Gabbert was there to document everything. The resulting film, “Ottolenghi and the Cakes of Versailles,” sounds interesting in theory and certainly looks good throughout. But in its attempt to cram too many narratives and subjects into too short of a running time, it ends up coming across as both overstuffed and oddly undernourished.

To assist in this effort, Ottolenghi recruits a veritable Murderer’s Row of ambitious patissiers from around the world to create exhibits that will bring together the storied culinary history of Versailles with their own cutting-edge approaches. Perhaps the most famous of the group is Dominique Ansel, the man best known for inventing the cronut. Ghaya Oliveira is a chocolate expert from Tunisia who is the executive pastry chef at the exclusive New York restaurant Daniel. The British duo of Bompas and Parr have had their elaborate jelly creations Instagrammed throughout the world. From Singapore, Janice Wong is known for intricately detailed pieces of “edible art” and plans on using her skills to design an elaborately detailed recreation of the garden of Versailles. Ukrainian baker Dinara Kasko creates astonishing cakes designed using principles that she learned from when she was originally studying to become an architect.

So the basic concept of the exhibit is sort of interesting, the personalities assembled to bring it to life certainly are, and the end results of their work are spectacular to behold (even though intrinsic sensations of taste and smell cannot be replicated in the context of a film). The problem with the film is that it has a running time of only 75 minutes and by trying to cram all of those elements, not to mention historical explorations of Versailles from a food-oriented perspective, such a short running time means that Gabbert gives each one a too-brief and ultimately superficial treatment. One of the great things about a film like this is that it offer viewers the chance to actually learn something on a subject they may have never even thought about before seeing it. By racing through everything, I never got the sense that I was really learning anything of value or substance.

Watching the film rush through everything, it occurred to me that it might have been much more effective as a limited series with perhaps each chef getting an episode dedicated to their differing approaches and creative processes, along with an episode revolving around Versailles and what it continues to stir the imagination today, and a final episode centered on the exhibit itself. As it is, only two scenes are genuinely memorable, in part because they aren’t overly rushed. One is, of course, the final unveiling of the exhibit—not surprising because if that doesn’t work, you clearly have no movie. The other is an anger-inducing sequence in which an observer in the kitchen insists that Kasko add cocoa butter to her batter to help with a problem she is having despite her insistence that it will not work. He gets his way, she turns out to be right and has to rework things while he just goes off.

“Ottolenghi and the Cakes of Versailles” is the kind of thing that some people might describe as “food porn.” If that's the case, it's of a decidedly soft-core nature. Whatever its initial ambitions might have been, the end result is ultimately little more than a slightly super-sized episode of one of those slightly ludicrous shows in which the construction of fondant-based creations is presented with the kind of tension usually associated with the bridge crossing sequence in “Sorcerer.” For some people, that will be more than enough. As for me, when the film came to an end, I found myself hungry for a piece of cake and a better movie.

Now in select theaters and on demand. 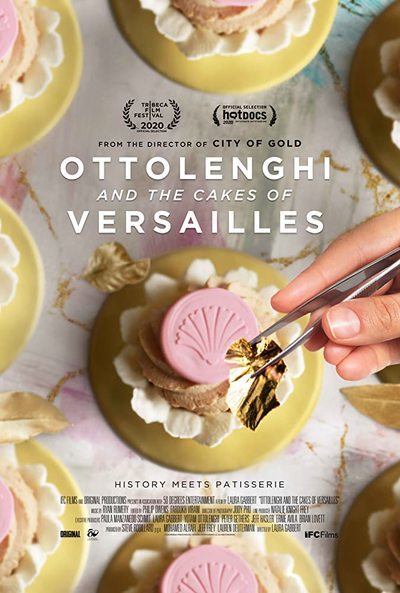 Ottolenghi and the Cakes of Versailles (2020)

Yotam Ottolenghi as Self