Dominik Moll’s “Only the Animals” is one of those movies that's best experienced by going into it knowing as little as possible. Of course, this makes a challenge for anyone charged with writing about it—how does one go about discussing it in any substantial way without ruining some of the numerous surprises along the way. To that end, I will endeavor to be as brief and vague about any plot particulars as I can. But my advice is that if you have any interest in seeing the film (Spoiler Alert: you should), you should probably set this review aside for the time being, watch the film for yourself, and then come back later to discover just how brilliant and precise my analysis has been. Trust me—I don’t mind.

Set mostly, though not entirely, in a rural French mountain village, the film kicks off with the disappearance of Evelyne Ducat (Valeria Bruni-Tedeschi), a Parisian society woman of some prominence who has been staying at her stylish winter vacation home. Her car has been found abandoned by the side of the road but other than that, there's no trace of her to be found anywhere. As the television broadcasts updates on the case, a local cop Cedric (Bastien Bouillion) interviews some of the locals in the hopes of coming across something that will lead to either the discovery of Evelyne, or at least some rational explanation for her seemingly vanishing into thin air. One local woman, insurance agent Alice (Laure Calamy) finds it hard to believe that anyone in the area could possibly be involved. Needless to say, the rest of the film shows just how wrong that assumption is.

At this point, I will only simply mention the key characters who will play a part in the ensuing narrative. There is, as mentioned, Alice, who is unhappily married and currently having an affair with one of her clients, Joseph (Damien Bonnard), a reclusive farmer still reeling from the recent death of his beloved mother and who cannot help but give off a vibe reminiscent of a particularly infamous motel owner. There's Alice’s sad sack husband, Michel (Denis Menochet), who seems to know all about her affair with Joseph and has been acting stranger than usual as of late. There's also Marion (Nadia Tereskiewicz), a young waitress who has come to town to pay a surprise visit to her new lover, and you can probably guess how well that turns out. Finally, there's Armand (Guy Roger “Bibisse” N’Drin), a young man living on the Ivory Coast who has become a phone scammer as a way to make a lot of quick money and hopefully win back his old girlfriend (Marie Victoire Amie), who has taken up with a rich and mysterious older man.

Because the film is based around the strange disappearance of a woman and is set mostly in a wintry locale, you may find yourself already making mental comparisons between “Only the Animals” and the Coen brothers classic “Fargo.” However, Moll and co-writer Gilles Marchand, working from a novel by Colin Niel, have something a little more ambitious in mind. Instead of relating the story in a linear manner, they instead rely on an elaborate flashback structure that's broken up into five sections—each one focusing on one of the above characters—that allows us to gradually discover the previously unsuspected connections between everyone and the missing woman. The effect is less like “Fargo” and more along the lines of something like “Short Cuts” or “Magnolia,” though I found myself also flashing back to Michael Haneke’s quietly diabolical “Cache” as well.

I sometimes become annoyed with films that utilize elaborate jigsaw puzzle-style structures to tell their story, but that's not the case here. While there's a certain pleasure in watching the story take shape before our eyes, the characters and performances are just as interesting as the structure. All of the key people in the story are vaguely dissatisfied with their lives and strive to find some kind of happiness in ways that end up having strange repercussions, both for themselves and others in their orbit. The performances are also quite strong as well, with the most interesting ones coming from Bruni-Tedeschi as the missing woman and Tereskiewicz, who is heartbreakingly good as the lovelorn waitress who is by far the most honest of everyone, and who still winds up trapped in a web of lies.

I am not entirely sure, at least based on a single viewing, that all of the screenplay's various contortions add up in the end, and some viewers may be a little frustrated by how often it relies on sheer coincidence to keep things moving. (The final connective twist that crops up in the closing moments is particularly egregious.) By and large, though, “Only the Animals” is an effectively convincing slow-burn thriller that marks the welcome return of Moll, who first made a splash with the wickedly entertaining thriller “With a Friend Like Harry.” Needless to say, this is the kind of movie you have to pay quite a lot of attention to for it to make sense, but those who make the effort will be rewarded. 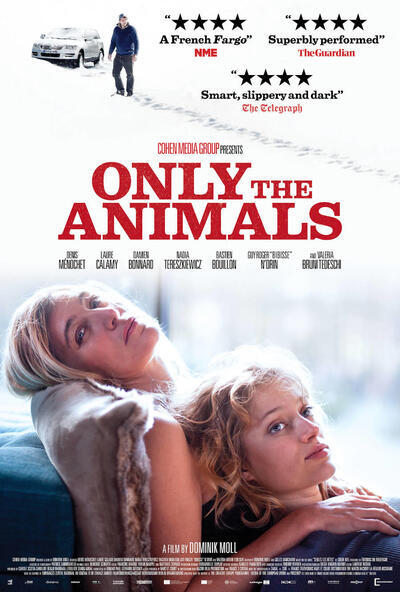