One Sings, the Other Doesn't

Suzanne lives with a photographer who isn’t much of a man. They aren’t married, but he’s fathered two of her children. Now she’s pregnant again, and there isn’t enough money for food as it is. Suzanne is 22. She makes a friend of Pauline, the 17-year-old around the corner who everyone calls “Pomme,” for “apple,” maybe because of her round cheeks.

Pomme helps Suzanne find the money for an abortion, and stands by her as a friend during the ordeal. The two women draw closer as the photographer wraps his insecurity around himself. One day, returning to the studio, they find he has hanged himself. So now Suzanne is left with two children, no lover, and an uncertain future.

So begins Agnes Varda’s “One Sings, the Other Doesn’t,” which, despite its grim beginnings, goes on to become one of the most appealing films by a French director whose best work has always found a balance between the heart and the mind. Varda works close to the human grain; she insists whenever possible on making documentaries between each of her feature films, so she can stay in touch with reality and not fall for the stylistic excesses of the big fiction films.

That restraint isn’t always evident in “One Sings, the Other Doesn’t,” which contains about three or four songs too many for its subject matter to support. But I’m getting ahead of the story, which is simplicity itself: After her lover’s death, Suzanne goes with her children to live on her parents’ farm in the country, and Pomme… well, Pomme has adventures.

She becomes a pop singer. She becomes a feminist, and forms a singing group dedicated to woman’s liberation. She falls in love with an Iranian student, who seems one sort of person in France and quite another after she marries him and moves back to Iran to have his child. At home, he’s an unreconstructed chauvinist, insisting that his wife fill traditional roles. She can’t see it, and they finally part, more or less friends, and she returns to France.

In the meantime, the two women have somehow kept in touch through the years. Sometimes they meet; more often it’ll be by letter or postcard, Pomme checking in from some exotic spot and Suzanne (who eventually marries a doctor) replying with news of the reassuring rhythms of life on the farm. Varda’s title is a perfect one (and even more melodic in French: “L’une chante, l’autre pas”). Here we have them, she says: Two women, friends, and one sings and the other doesn’t, but they’ll remain friends and sisters for all of their lives.

The movie’s final passages are among the best. Pomme comes with her child and friends to spend some time on the farm, and so several generations are brought together as the two friends approach the middles of their lives. There’s a picnic, and kids playing, and wine, and singing (but of too many songs), and what Varda’s doing, in a sneaky way, is making her case for feminism in a lyric voice instead of a preachy one. 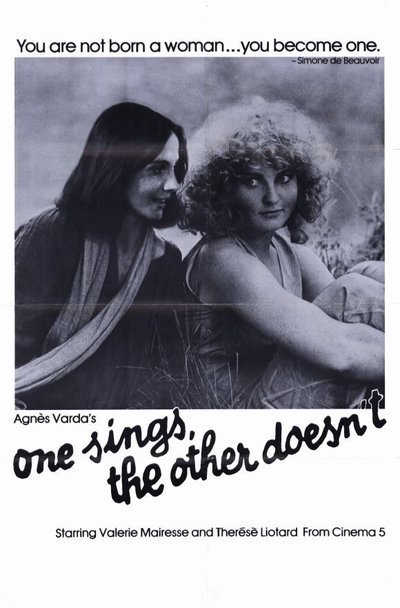