One Cut of the Dead

[There are some spoilers in the following “One Cut of the Dead” review. Do what feels right, as long as you’re not hurting anybody.]

Last year, the Japanese zombie-comedy “One Cut of the Dead” was a word-of-mouth smash on both the international film festival circuit and in its native country. The micro-budget movie’s multivalent success wouldn’t be so remarkable if the movie’s fans weren’t so good at keeping its twists a secret. For months now—almost two years, if you count the 2017 Tokyo premiere—horror movie buffs have kept this cult oddity’s nesting doll narrative under wraps. They’ve also helped to hype up the movie’s reputation to the point where I almost fell out of my chair (literally) when I saw that “One Cut of the Dead” was finally receiving a US theatrical release. And I already owned the damn thing on DVD. I had to know: what did I miss when I regrettably bailed on it (after 30+ minutes) at the 2017 New York Asian Film Festival?

Having now seen “One Cut of the Dead” all the way through, I can tell you a couple of things, and speculate about a few more. For starters: yes, you should probably see this one knowing as little about it as possible. I’m not generally a spoiler-phobe, but I appreciate that part of the movie’s charm comes from the almost impenetrable aura of mystery that surrounds it.

With that said: “One Cut of the Dead” requires some patience. It begins as a visually flat, mostly by-the-numbers zombie comedy about a low-budget film crew who are menaced by zombies in real time while filming a zombie movie. So for the first 37 minutes, we follow a group of uninteresting, indistinct characters while they wander and occasionally flee from various shambling zombies in, up, and around an abandoned factory.

This portion of the movie is still, upon rewatch, not great. Granted, writer/director Shinichiro Ueda throws some gas in his otherwise fume-driven genre vehicle just by filming his movie’s opening segment in one continuous, uninterrupted take. You may also enjoy watching characters run around while deranged, realism-obsessed director Hirugashi (Takayuki Hamatsu) occasionally pops up, as if out of thin air, to yell “action” or ramble about “true filmmaking: "There is no fiction, no lies! This is reality!” Still: imagine you’re watching somebody else play a generic first-person video game (one of the “Resident Evil” ripoffs, maybe), and you’ll probably understand why I bailed on “One Cut of the Dead” two years ago.

Thankfully, there’s more. After those 37 minutes, “One Cut of the Dead” digs a little deeper into its meta-comedy: we join Hirugashi as he’s asked to direct the short movie that we just saw. This narrative gear shift is welcome, though it doesn’t really make Ueda’s movie pick up much speed. Viewers follow Hirugashi and some members of his crew as they figure out how to make the best zombie movie they can given the time, cast, and resources available to them. Guerilla filmmaking—even of z-grade quality—can be tough, so it’s nice to see a movie about movies show how many deferred opinions, budgetary restraints, and creative gaffes can happen behind the scenes on a dinky genre movie that, on its surface, doesn’t really stand out. At this point, Ueda’s film is what you’d get if “Day for Night” and “Ed Wood” had an inferior, but still likable movie-baby.

Soon enough, “One Cut of the Dead” goes further with its meta-reflexive humor, and finally starts to move as we re-watch the film’s first third again, only this time through Hirugashi’s eyes. Now we see all the last-minute work that was happening while they shot their short, from wrangling actors to securing equipment. This part of “One Cut of the Dead” is fun, partly because Ueda and his co-creators don’t conflate filmmaking rigor with artistic merit (ie: they worked really hard on this passable high-concept comedy, so you should respect them for it). But for the most part: “One Cut of the Dead” works thanks to the simple joys of pattern recognition and variation: what starts as a strained attempt at self-aware playfulness finally becomes genuinely lively.

With that said: I’m not sure if the payoff at the end of “One Cut of the Dead” is good enough to warrant such a drawn-out, belabored set-up. The jokes and characterizations are generally one-note, and Ueda’s movie appears, for the most part, to be indifferently assembled. You have to want to invest in his characters in order for “One Cut of the Dead” to really take off, so your mileage may vary on how long that will take, if it takes at all. For me, “One Cut of the Dead” is good enough. It sometimes surprised me while I waited for a payoff that Ueda basically delivered, even if he and his collaborators never made me involuntarily leave my seat. 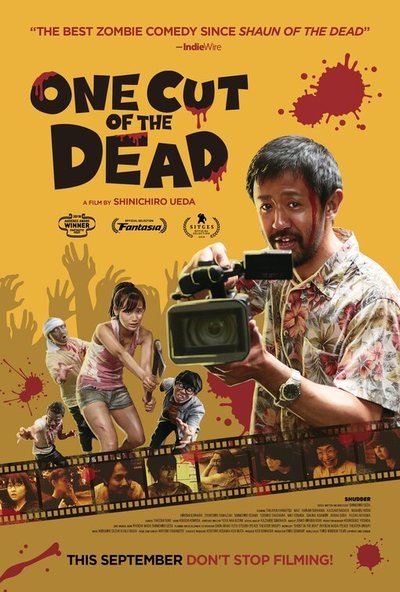