On a Magical Night

Certain moments of “On a Magical Night” are so warmly lit that you could be forgiven for recalling “Bridget Jones’s Diary” and its quaint vision of London after dark. But writer/director Christophe Honoré’s over-styled yet under-wrought Parisian tale, complete with similarly golden-hued street lamps and a snow-swathed lane, isn’t quite about the delightfully dated chronicles of a woman’s rom-com-y misadventures; a premise that benefited from its fanciful urban setting. Here, we instead follow a sophisticated, long-time married professor, Maria (a droll Chiara Mastroianni), as the chronic adulteress reconciles with her past over an eventful “what if …” night that is neither magical nor all that funny. The film offers some simple-minded insights into the myth of the happily-ever-after, and a dash of nonchalant French charisma. But the whole thing is only as original as a dull midlife crisis, retrofitted into a whimsical screwball mold that feels miscalculated.

Before things turn pedestrian and fantastical, Honoré at least grants us an intriguing introduction to Maria, who doesn’t exactly believe in monogamy. Quite the contrary—the red-haired scholar argues a marriage can only survive the threat of time and boredom if spouses are allowed to chase occasional bedroom exploits elsewhere, delivering a rather convincing case in favor of indulging one’s sexual curiosities. Our first glimpse of her comes in the midst of one such extramarital escapade. Unable to stomach the sweet-nothings exchanged between her young student lover, Asdrubal, and his girlfriend, the half-clothed Maria comes out of her hiding spot casually, exposing the young man’s infidelity with hilarious flippancy and returning home to her unsuspecting husband Richard (Benjamin Biolay). Unaware until then that his wife has decided to practice the rules of an open marriage on her own, Richard finally discovers Maria’s ongoing unfaithfulness, thanks to an ill-timed text message.

Don’t expect to see yelling, crying, or things getting smashed against the walls of the couple’s well-appointed apartment—a confrontation happens, but it happens casually while Honoré’s textbook French intellectuals keep it civilized amid their endless shelves of books and abundant first-world luxuries. Realizing that a night together under the circumstances can lead to no good, Maria promptly leaves her handsome residence and checks into a hotel room across the street. There, an endless sequence of her past boyfriends pop in and out of Maria’s imagination (and thus, her room), as she patches up the odds and ends of her life. Among the young men that would appear out of nowhere is none other than the young Richard (Vincent Lacoste), stopping by to remind Maria why she fell in love with him in the first place. Also among the visitors are Irène (an alluring Camille Cottin), Richard’s former piano teacher and seductive lover he almost ended up with instead of Maria, as well as Maria’s mother and grandmother readily available to deliver a banal observation or two about their offspring’s troubles.

An author and a cross-disciplinary creator with a body of work in theatre, Honoré works in a stage-y mode in “On a Magical Night,” supplying the film with an absorbing level of visual artistry along with his production designer Stéphane Taillasson and cinematographer Rémy Chevrin. Through a well-choreographed construct, doors materialize and open on opposite ends of the screen as they would on a stage, leading into rooms and spaces where Maria stretches her thoughts and muscles as she faces the aftermath of her actions through some mildly funny banter.

But while the visuals keep things interesting to an extent, Honoré sadly abandons both the appealing character we expected to get to know in a deeper way and her present-day reality with her husband. Initially establishing Maria as an independent thinker, Honoré then curiously watches her fall victim to the shaming of a series of immature mansplainers. And because his script refuses to invest in the duo’s current relationship in any real, emotional sense, we find it hard to care about the future of their marriage, even when the ending hints at a pleasant resolution. Meanwhile, he similarly sells Irène out with a late, distracting chapter that feels utterly out of place. It would be one thing if “On a Magical Night” failed to understand an aging woman’s appetite for alternatives in life. But this style-over-substance film’s real offense is not even bothering to try. 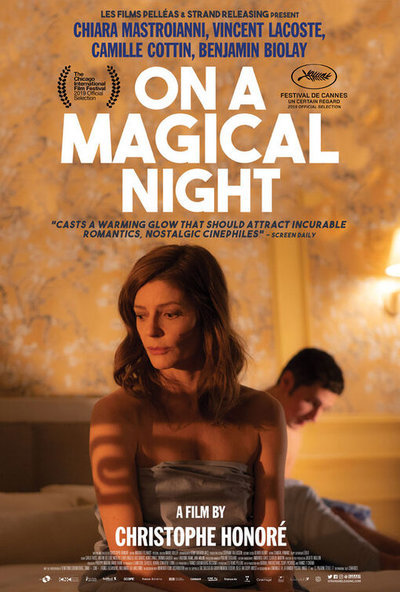