Given the preponderance of unusual and/or extreme imagery that has turned the genre film into, in many cases, a never-ending exercise in one-upsmanship, it has, among other things become difficult to accurately say that a movie offers things you have never seen before.

I’ve got to say though that I feel reasonably confident that “November” serves up more than a few unique visions. The beautifully shot black-and-white movie, an import from Estonia, begins with ice-cold whites and wolves wandering on gleaming surfaces. Then a winter’s scene: a farmhouse in the snow. Metallic noises of something creeping, or of gears shifting perhaps. And then: a kind of machine that looks like three crooked spokes without a wheel, turning over and over again, approaching a barn, dragging a chain. Once in the barn it uses the chain to lasso a young cow and drag it away. Soon the human inhabitants of the barn chase down the creature. Once contained, it speaks out of an aperture in the metal: “Give me work.”

This thing is a “Kraat,” a creature made from makeshift tools and appliances and animated by a human soul, one either signed away or promised in blood. They figure prominently in the not-quite medieval world of this film, written and directed by Rainer Sarnet from a novel by Andrus Kivirähk.

The movie’s depiction of the farmhouse life of times that now seem ancient to us is spectacularly detailed and nearly palpable. Low-ceiling dwellings, raggedy clothes, sinister evenings lit by nothing more than stars and sometimes the moon. On All Soul’s Day, the families of the community come out to commune with their dead relatives, who show up dressed in luminous white and, after some perfunctory chit chat take their rest in saunas that their next of kin have prepared for them. Once in the saunas, they morph into chickens, according not only one bearded seemingly mad local, but an actual shot in the film.

There’s a story within all this unusual imagery, but the movie’s one ostensible failing is that whenever it forefronts the narrative, it seems not terribly interested in it. Lina (Rea Lest), a lovely young woman in a farm family, has an unrequited longing for Hans (Jörgen Liik), a fellow from the neighborhood. Hans, however, is besotted with the daughter (Katariina Unt) of a German baron (played by Dieter Laser of “Human Centipede” “fame”) living in what appears to be the county’s only mansion. Lina is apparently set to be married to an old beardo, whom she puts off by telling him he must be mistaken, he’s actually set to marry a pig. Failing to raise Hans’ eyebrow, she goes out to the woods, strips down, smears herself in fat (I think) and morphs into a wolf (I think). She contemplates killing the rich girl but can’t bring herself to do it. Because, regardless of how she mouths off, she’s a pretty good person.

The narrative never really builds a good head of steam. That could just be because as a Westerner with extremely limited knowledge of Estonian culture and mythology, the barrage of tropes from there is relatively overwhelming for me. Even so, “November” never stops being a visual trip. And that may well be enough. 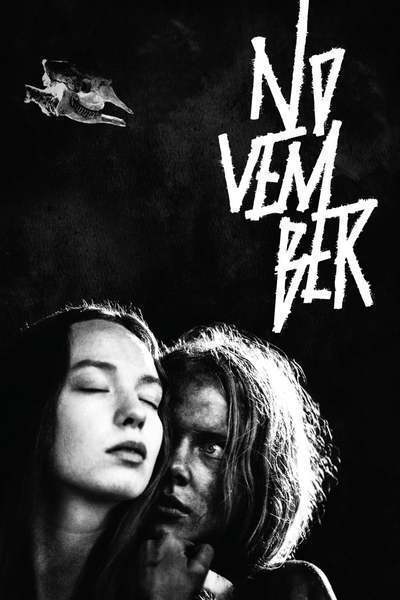 Rea Lest as Liina