Something’s wrong with Christine in “Nocebo,” a dreadful psychological/supernatural horror pic about a fashion designer who can’t get her mind around a recent trauma. Christine (Eva Green) can’t remember what exactly happened to her, because she doesn’t want to deal with the bad news that she, in an early scene, receives during a mysterious phone call (something about “pulling out bodies?”). All she, and therefore we, know is a vague, implacable terror has descended upon Christine, and it’s got something to do with her recent memory loss.

Christine’s hands shake when she claws open a child-proof pill jar. She’s suffering (or suffered?) from a litany of psychosomatic ailments, including rashes, nerve pain, and headaches. Christine says that her symptoms immediately disappear whenever she visits a doctor. Now a stranger, Diana (Chai Fonacier), has arrived at Christine’s home and has offered to help Christine with everything, including three square meals for Christine’s wary husband Felix (Mark Strong) and pouty daughter Roberta (Billie Gadsdon). Diana also says that she can help to heal Christine. “Something is hidden inside of you, Christine,” Diana says. “Something you hide from yourself.” Getting at that “something” takes too much effort, and the result is not as satisfying as the vague uncertainty that often overwhelms both Christine and Green’s performances.

Director Lorcan Finnegan and screenwriter Garret Shanley attempt to tap a rich vein of horror by focusing on Christine’s personality-defining brain fog. Without explicitly being about COVID, "Nocebo" evokes present fears of physical infirmity and bodily autonomy. For example, the face mask that Christine wears to help her sleep looks suspiciously like a hospital respirator. There’s another kind of topical twist at the end of “Nocebo.” Christine’s total loss of perspective is ultimately disappointing because it’s pat and bloodless, and weirdly didactic in a way that suggests that she, and therefore we, aren’t focusing on what’s really wrong in the world today. A few nightmarish signs and portents—a milky-eyed dog, some oversized pill bugs—also have to do some heavy symbolic lifting. Unfortunately, they’re used so sparingly that it’s too easy for viewers to emotionally check out during key scenes where Christine’s health and sanity further deteriorate.

Still, Christine’s myopia is striking at the start, and often represented in ways that bring to mind the claustrophobic mise en scene of both “Repulsion” and “Rosemary’s Baby.” The walls of Christine’s house—and car, and world—have already closed in on her. Now only Diana can open things up again. Her plight also brings to mind older horror movies, specifically the exoticism and tenderness of the Val Lewton-produced B-movie classics “I Walked with a Zombie” and “The Curse of the Cat People.” Diana is a reserved Filipino nanny who knows a lot but doesn’t say much about what’s wrong with Christine. Christine is still essentially blamed for Diana’s cryptic behavior since Christine repeatedly shows and tells us that she’s not ready to face her past. “I don’t want to see,” she says to Diana in Cebuano, as if to underline this talking point by literally speaking Diana’s language. Sadly, while the bond between Diana and Christine is definitely creepy, it’s never memorably expressed. They talk a lot about trust because Christine must have faith in Diana if she’s ever going to feel better. That power dynamic bothers Felix because, uh, who is this woman, and why is she now sleeping in his guest bedroom? The answer to that question isn’t that impressive conceptually.

Despite its creators’ endlessly restated intentions and concerns, “Nocebo” sometimes casts a spell. Green is typically commanding as Christine, but she’s usually overshadowed by Fonacier, whose measured performance is well-realized and deeply felt in ways that Green is never allowed to be, beyond over-edited fits of actorly desperation. With “Nocebo,” Finnegan and his collaborators have put their finger on something dark and disturbing. Too bad it’s never as upsetting as it is suggestive.

Now playing in theaters and available on digital platforms on November 22nd. 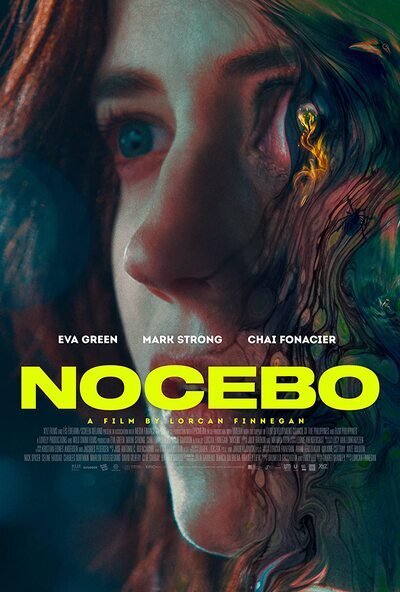