No Stranger than Love

Nick Wernham’s “No Stranger Than Love” starts off promisingly, bouncing through with performances from the incredibly likable Alison Brie and Colin Hanks. Brie plays Lucy Sherrington, the woman that everyone pines after in a small American town. This is established in a relatively clever series of opening scenes, in which the principal at the school at which she works, one of her students, even the garbage collectors on her street all profess their infatuation with her. And yet Lucy remains alone—voted the queen of the town fair every year but without a partner in her bed. That is until the night that Coach Clint Coburn (Hanks) decides he’s finally going to act on the sexual chemistry between the two of them, and cheat on his wife with Lucy. As the two stand in front of each other in Lucy’s living room, Clint professes his love for Lucy. And a giant black hole opens up in the floor and sucks in Coach C.

From his new position in Lucy’s black hole—from which he can communicate with the world above but sees only darkness—Clint understandably panics. At first, he doesn’t want the rest of the town to know for fear that they’ll figure out why he was at Lucy’s house in the first place. So Lucy has to sneak around town to try and find rope with which to extricate poor Clint. While doing so, she crosses paths with a nefarious-looking (sunglasses and dark clothes to offset against a notably bright small-town America color scheme) fellow named Rydell Whyte (Justin Chatwin), who happens to be looking for Clint himself. Why does Rydell want Clint? How will they get him out of the hole? What does this all mean?

The sad answer is not a lot. “No Stranger Than Love” feels like it probably began life as a one-act play, set almost entirely in Lucy’s living room and with a small cast of characters. It has that feeling of a piece that needed a bit more workshopping to discern its purpose and, like a lot of independent cinema that feels like it has theatrical origins, never becomes convincingly cinematic. The charm of its first act dissipates before the halfway mark. As Lucy is feeding rope into the hole in her floor, I realized it was a metaphor for the film, trying to grab onto something. Thematic ideas planted in the first act (for example, how adoration can lead to abuse of power) are discarded just as everyone tries to figure out the purpose of the hole and the fact that Clint was planning to cheat on his wife becomes more important than anything substantial.

The film is a wasted opportunity to explore its concept's depth and give Brie (a talented comedienne with perfect timing on NBC's "Community") a meaty character to play with. And while the first act unfolded as a commentary about the pedestal on which the townspeople had put Lucy, I waited for writer Steve Adams to subvert that through Lucy’s character. Sadly, he never does. Yes, a few townspeople learn that Lucy is more complex than they thought, but perhaps the fatal flaw of “No Stranger Than Love” is that Adams and Wernham felt the need to replace one male paramour for Clint with another in Rydell. They’ve made a movie about how people shouldn’t be defined by what others think of them, but its central character is largely defined by the men around her, from first frame to last. 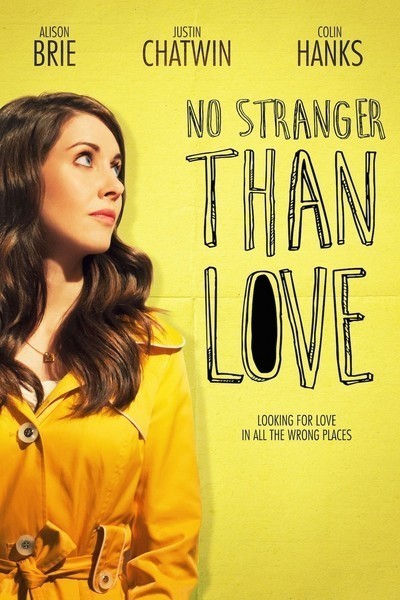