No One Gets Out Alive

An undocumented immigrant is in her rundown apartment alone trying to call family back home. At least, she thinks she’s alone. She's not. She’s the first on-screen victim in a long line of them in Santiago Menghini’s horror feature debut “No One Gets Out Alive.”

Ambar (Cristina Rodlo) takes the space in a dilapidated Cleveland boardinghouse not knowing what’s transpired there before. Soon, she also starts to hear screams and disembodied voices. Ghostly strangers appear throughout the old house. But like the movie’s first victim and the other boarders in the home, Ambar is undocumented. She’s unable to call the police for fear of deportation or find other resources that may be closed off to non-citizens. Escaping the haunted house is a dangerous bid to survive.

Based on Adam Nevill's novel, Menghini’s “No One Gets Out Alive” explores the real-life horror of how undocumented immigrants are exploited using a conventional horror movie construct. Ambar is haunted by the death of her ailing mother in a hospital scene we see revisited multiple times throughout the film. Then there’s the waking nightmare of navigating a sweatshop and other immigrants looking to take advantage of her naïveté. That’s before we get to the suspicious owners of a boarding house who prey on young immigrant women like Ambar. Red (Marc Menchaca) and his even more intimidating brother Becker (David Figlioli) make for great stoic villains, too stone-faced to betray their true intentions, even if Ambar has a bad feeling about them both. The brothers and the home share a grisly backstory, one rooted in movies like “The Living Idol” or “The Mummy,” where explorers unearth a cursed object that then has to be dealt with. Ambar’s one chance at finding a friendly face in Cleveland belongs to a distant cousin, Beto (David Barrera). However, his storyline shows there may be some limits to the kindness of Stateside families who have created lives for themselves far away from their families abroad.

“No One Gets Out Alive” builds its suspense through scares both real and supernatural. While I’m less satisfied with its ultimate execution, Jon Croker and Fernanda Coppel's script has a lot going in its favor. The filmmakers make a point to show undocumented immigrants from different countries, not just Spanish-speaking ones, and set the story in a place faraway from giant coastal cities that usually host these stories. It’s a subtle acknowledgement of the widespread experiences in the immigrant community without necessarily making it a plot point or detracting from the movie’s ominous tone.

One of the movie’s biggest stumbling blocks comes at the end when the monster behind the violence appears. The ultimate creep of “No One Gets Out Alive” looks silly, enough so that it took me out of the movie and made me laugh. Skip the rest of this paragraph if you want to see it for yourself, but at the film’s climactic high point, a being emerges from the ominous looking box with swole beefy arms-for-legs, a face that looks hidden under a shroud, a thick amphibian-like body and thinner almost T-rex-sized arms with human-like hands meant to grab a victim’s head before decapitating it with a mouth full of teeth near the bottom of its body. More plainly, it looks like a vagina dentata. The perplexing amalgamation of human parts and animal-like skin deflates much of the suspense the movie had shored up.

Even if everything doesn’t quite work, “No One Gets Out Alive” has a good premise and solid performances from Rodlo and her castmates to sell an audience on the spooky tale. It’s enjoyable enough to ring this year’s spooky season of horror movie binges and rewatches. However, not everything that goes bump in the night deserves to be seen or explained, and I wish that was one mystery “No One Gets Out Alive” kept for itself. 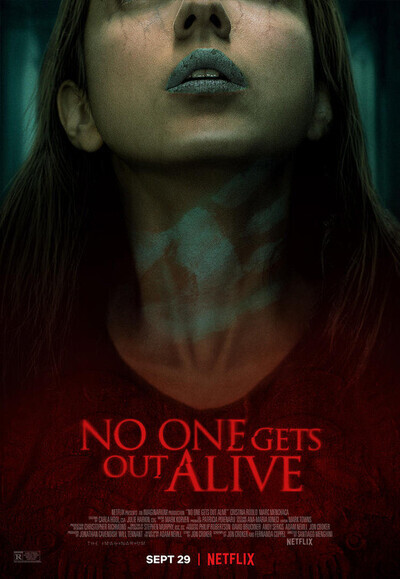