Amber Sealey’s “No Man of God” joins a long line of films about Ted Bundy, far too many of which have fed into the mystique of the handsome, charming, brilliant sociopath, putting the serial killer on a pedestal. Her film tries to sidestep that a bit by presenting not Bundy’s crimes or attention-grabbing trial but the days in which he was basically trying to talk his way out of the electric chair, but she still cedes so much focus to The Myth of Bundy that everything but him falls to the side. It’s therefore somehow damning to say that Luke Kirby’s performance as Bundy is quite possibly the best yet put on film—he’s magnetic and nuanced, but that turns “No Man of God” into yet another project that leans too heavily on not just the Bundy mythology but the supposition that he could have been living next door to anyone in America, or even an FBI profiler if he made a few other choices. I’m not here to unpack the unusual industry of books, shows, and movies that have built up around Ted Bundy, only to say that “No Man of God” doesn’t add enough to the Bundy catalog beyond a strong central acting turn.

Kit Lesser’s script works from recollections of FBI Agent Bill Hagmaier (Elijah Wood) and recordings of the very famous interviews the young G-Man did with Ted Bundy (Luke Kirby) from 1984 to 1989. In the ‘80s, the concept of profiling some of the most vicious sociopaths on Earth to help the FBI catch them in the future was first coming to light. John Douglas, the man who inspired Netflix’s “Mindhunter” is name-dropped in “No Man of God,” and the conversations between Hagmaier and Bundy in real life reportedly inspired Thomas Harris, the man who wrote Manhunter and The Silence of the Lambs.

Wood plays Hagmaier as a wide-eyed but confident young agent, someone who seems fascinated with Bundy but also unafraid of him and, importantly, in no hurry to dominate him. Agents would come to talk to Bundy and try to alpha male him, but Hagmaier tried to meet him on his level, hoping that a different approach could lead to something, anything about missing victims to give closure to the families. Sealey and Lesser’s script also leans too much on something darker, a suggestion that Hagmaier could have been Bundy with a few different life choices—or vice versa. This is common in the serial killer drama genre to a fault—the idea that serial killers are more like you and me than we’d like to believe. Scenes wherein Hagmaier gazes for a little longer than he used to at young women of the kind that Bundy would have likely targeted feel trashy and insincere, especially one in particular after one of their darker conversations.

“No Man of God” is constantly sabotaging what works about it with sensational choices. Sealey’s film comes to life as a literal two-hander, putting two actors in a room and letting them bounce off each other intellectually. At its best, it feels like the kind of theatre project one would see in a black box theatre on a college campus. And this is where Kirby shines, finding just the right balance of charm and menace that fueled Bundy. Sealey frames him interestingly too, often placing him direct right of frame, making him feel more aggressive even in normally modulated conversation. It creates a sense of threat even though there really isn’t one.

So it’s all the more disappointing when a techno-driven montage of dark imagery kicks in or some other choice that feels cheaper than this movie needed to be. “No Man of God” ultimately sinks into the shadows of so many similar and superior projects, and it feels cheap. It just doesn’t have enough to add to the conversation or a strong enough artistic POV to justify its shallowness.

Now in theaters and available on digital platforms. 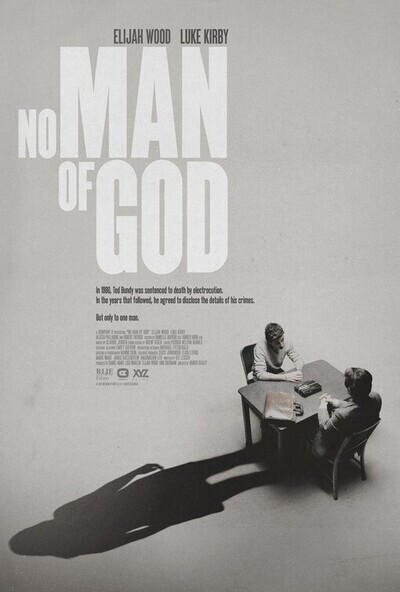