“No Future” is the kind of movie that presents a challenge to anyone attempting to review it, as even the vaguest plot description will ensure that most will probably go out of their way to avoid it despite any praise I might offer. Trust me, I fully recognize that this is not the kind of film most people would voluntarily choose to watch as a way of relaxing. However, those willing to give "No Future" a chance will find it to be a fairly smart and realistic depiction of two people consumed by grief, guilt, and loss and the misguided ways by which they attempt to come to terms with those feelings.

Will (Charlie Heaton) is a young man and a former musician who is in the process of recovery from heroin addiction and is fully aware of all the pain he has caused in the past—when he goes to visit his estranged father (Jackie Earle Haley), he first makes Will roll up his sleeves to look for fresh needle tracks—and just how tenuous his path to sobriety really is. Nevertheless, he's clearly dedicated to getting clean for good—he regularly attends 12-step meetings and has even begun a relationship with girlfriend Becca (Rosa Salazar) that has progressed to the point where he is contemplating asking her to move in and therefore letting her even further into his life.

He also recognizes a potentially disastrous situation when he sees one, such as when estranged best friend and former band mate Chris (Jefferson White) turns up at his house following a recent prison stint. Chris is clearly in a state of physical and emotional anguish that reminds Will all too well of what he has put behind him but he doesn't feel strong enough to help Chris if he asks or to resist if he is encouraged to return to his old habits. He ends up turning Chris away—he explains that Becca is coming to stay the night. The next morning, he gets a message from Chris' mother, Claire (Catherine Keener), informing him that he came home late that night, went into his bedroom, and died of an overdose.

Stricken with guilt, Will goes to the funeral and reunites with Claire, who is reeling not just from the loss of her child after years of trying to deal with his addiction, but by the fact that she'll never know for sure if Chris’ fatal overdose was an accident or if he deliberately killed himself. Will commiserates with her but cannot bring himself to admit that Chris went to see him that night before returning home and that his rebuffing might have proven to be her son’s final breaking point. That is bad enough, but things are exacerbated further when the two, largely out of a shared sense of grieving and a need for some kind of comfort, fall into a sexual relationship that, even under the best of circumstances, cannot possibly end well for anyone involved.

This is grim material and the screenplay by Mark Smoot (who also co-directs with Andrew Irvine) tries to negotiate a path between reality and melodrama with occasionally mixed results. For example, the moment that Will fails to immediately inform Claire about Chris’ visit that fateful night, it becomes obvious this information will end up being deployed, almost like clockwork, at about the 70-minute mark and the fallout will be used to drive the final scenes along. The film also has a tendency to introduce supporting characters and then fails to give them a purpose other than to help keep the narrative moving.

At the same time, “No Future” contains moments of bracing realism and honesty that stand in stark contrast to the more contrived moments. The affair between Claire and Will may sound like a twist worthy of a soap opera but it does work here as a way, however ill-advised, for these two to try to counter the annihilating sense of grief and guilt they are feeling. While they are unable to be honest with each other, the two do just that with strangers in a pair of especially wrenching scenes—Will speaking in front of his 12-step group and Claire confronting a couple of young women that she thinks is talking about her and her late son. (If you still need proof at this late date as to the brilliance of Catherine Keener as an actress, I advise you to watch the latter scene and learn.) I also admired how the film does not try to wrap things up in a neat little bow by offering simplistic solutions to problems that rarely come together in real life. That sense of narrative ambiguity, along with its lack of easy resolutions, will no doubt frustrate some viewers. But to end it any other way would be a betrayal of both its willingness to tackle hard issues and the strong high-wire performances from both Keener and Heaton.

So no, “No Future” is not exactly “entertaining,” at least in the classic sense of the word. However, that's more than offset by the raw power the film generates in its best moments as it goes to emotional places few movies these days even attempt to visit. "No Future" may not be a good time, but it is a good movie that, despite its occasional missteps, is still well worth seeing. 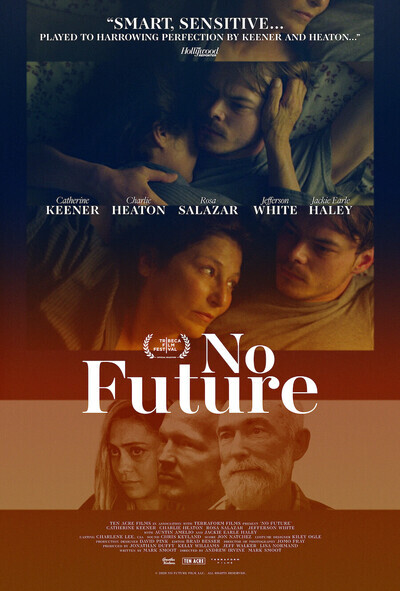 Charlie Heaton as Will