Pinochet: The Choice of a New Generation

A simple vote: "Yes" or "No." It's 1988 and Chilean President Augusto Pinochet agrees to a referendum: if the nation votes "Yes," (rather, "Si") he remains in power. Ad-man René Saavedra (Gael Garcia Bernal) leads the team campaigning for "No," using the marketing strategies of the American Cola Wars. To complicate matters, his boss Lucho Guzmán (Alfredo Castro) heads the "Yes" team.

Here are the rules: Each night, each side receives 15 minutes of airtime on national television to present its case. The "Yes" gang depicts Pinochet's leadership as an economic success, modernizing the country, introducing microwave ovens in the home -- all now at risk of socialist takeover if the communists of the "No" campaign succeed.

The "No" movement assumes that the election is fixed in the dictator's favor. Many of the activists themselves have suffered under Pinochet's regime. Assuming they will lose, they focus on raising awareness of the government's atrocities, overloading its audience with images of tanks, bombings and abused political prisoners. The problem, they discover, is that this negative approach generates fear, which contributes to a sense of powerlessness, which leads to voter abstention. Which further helps Pinochet.

So, Saavedra pushes for an operation focused on happiness. Borrowing images from American pop culture (including mimes, which seemed to proliferate in commercials back then), he presents his plan to speak of sunlight and hope. Imagine convincing a room full of hardened lifelong protestors to give up their black and white radical rhetoric, and embrace a campaign of Europeans dancing among rainbows, horses and picnics.

The film becomes a sort of boxing match, getting more intense with each round, building to an exciting finish. As the "No" group gets more aggressive in dousing its viewers with bright colors and smiles, the "Yes" team strikes harder, in multiple ways: harassing the "No" team members, stealing their video tapes, trying to censor their ads and finally taking from the "No" team's arsenal of promotional tricks and use them as their own. The brutal dictator's squad decides to incorporate humor into its own commercials.

Chronicling this fictionalized fight for the soul of Chile, the film reveals itself as an underdog story about the "generation gap," pitting youthful optimism against aging tyrrany, hope against repression. It reminds me of the era when Pepsi was "The Choice of a New Generation” and its rival told us that Coca-Cola was "The Real Thing." On the one hand, "You've Got a Lot to Live, and Pepsi's Got a Lot to Give"; on the other, "Coke Adds Life."

There are, however, moments that call Saavedra's motives into question. He is an expatriate returning home; there is hint that Pinochet exiled his father. Now, Saavedra raises his son in the comforts of a capitalist lifestyle, enjoying a luxurious residence with a sports car. But he longs for his militant ex-wife's validation. So, is he working on this campaign to save Chile, even though he personally benefits from the status quo, or is he trying to win back his lost love and reunite his family? Even deeper, there is the sense that his is an empty life full of toys and opulence, while hers is a life full of passion and substance. He admires her, and might even envy her. No matter the case, he reaches a point where he has to make a choice.

Larraín chooses to depict this period piece through an Instagram filter. Many of the ads feature actual footage from the real election. But the stock is some sort of 4x3 pre-VHS magnetic tape in which monochrome browns dominate every image. The colors run, forming RGB shadows and ghosts, blurring everything just enough to remind us that the changes of that era were not only political, but cultural and technological. Among the unseen ghosts are the Americans, hovering perhaps off screen. American intervention helps Pinochet seize power in 1973; now, fifteen years later, the opposition uses American pop culture to remove him.

Garcia Bernal quietly carries this film as a soft-spoken kid in blue jeans and untucked shirt. He looks like a man giving up the little boy inside, as he gets exhausted in a world overcrowded with frowns. His eyes are tired; his hair is messy. He speaks in whispers. He rarely smiles. And when the election is over, he continues rolling along on his skateboard, alone. 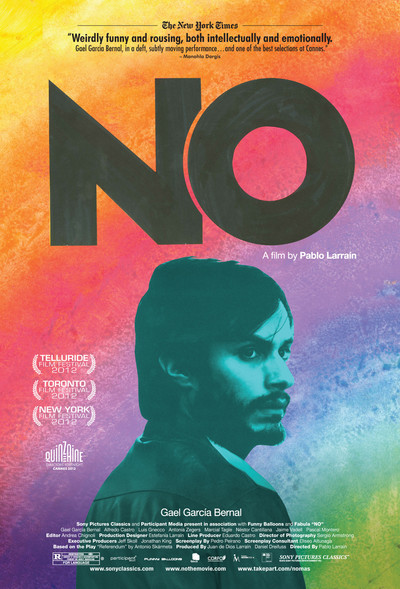