Justin Kurzel’s “Nitram” is almost like an echo of the filmmaker’s 2011 debut breakthrough “Snowtown,” which is also a dissection of a horrible, headline-grabbing crime from the Australian ‘90s. With an impressive career already under his belt in the last decade, Kurzel returns to the true crime genre with a more confident eye and mastery of tone, delivering his best film to date in an unsettling examination of mental illness. More than an explainer of motives behind a single person mass shooting, “Nitram” is a character study wrapped in a tone poem, an unpacking of a man who feels like he has run out of all potential paths to happiness and believes that acts of violence spark action. At one point in the film, the title character violently attacks his father, who has been in a depressive stupor. When asked why he did that, he says, “That’s what you’re supposed to do. That’s what you do.” Rarely has there been a more chilling study of that kind of simplistic mindset that sees violence not as a line that cannot be crossed but a way to trigger a response. It’s what you do. Especially when you have nothing else to do.

Caleb Landry Jones does the best work of his career as the title character, a man-child known as Nitram—Martin, spelled backwards. Nitram is intellectually disabled, wandering his home and neighborhood in a sort of daze. He struggles to talk to girls, lights fireworks in the middle of the day, and sometimes even gives them to local schoolchildren. He lives with his parents, played perfectly by the great Judy Davis and Anthony LaPaglia. Dad has a Willy Loman desperation to buy a bed and breakfast, and was recently approved to do so with a bank loan. Mom has the kind of bone-deep exhaustion that sometimes comes with a life spent uncertain about the danger level of someone living in your own house. At the beginning, “Nitram” feels like another story about the difficulty of parenting someone right on the verge of unstable. Jones and Kurzel don’t lean into the “growing sociopath” aspect of Nitram in obvious ways, more capturing the kind of sadness and apathy that can lead to dangerous thoughts.

Things look up for Nitram when he meets someone who appears to be a similarly lost soul in a wealthy former actress named Helen (Essie Davis), but she too carries a bone-deep melancholy at an unfulfilled life. Still, these two outcasts become an odd couple, buoying each other's miseries. Helen buys him a car even though he doesn’t have a license, and Nitram eventually moves in with Helen, much to his parent’s surprise, who are unsure if Helen is looking for a husband or a son. Without spoiling anything, dad’s business plans and Nitram’s new BFF each end in their own individually tragic fashions, pushing Nitram further down the road to the decision he would make in April 1996, when he shot almost three dozen people, leading to historic gun laws in the country.

Kurzel and cinematographer Germain McMicking (“The Top of the Lake”) convey a claustrophobic dullness in Nitram’s life through tense close-ups of bees on an eave or long shots of Nitram loping through Helen’s crumbling estate. There’s something unsettling about every frame of the visual language of “Nitram” that never calls attention to itself but allows the film’s consistent tone to get under your skin. It’s not only Kurzel’s striking directorial confidence but the trust he has in Caleb Landry Jones to nail this very difficult part. Nitram could have been a series of tics and melodramatic quirks, but Jones and Kurzel know that there’s something more terrifying about an emotionless stare than an explosive breakdown. It’s not so much that there’s torment behind Nitram’s eyes as there’s nothing behind Nitram’s eyes. His mother tells a story about a young Nitram taking pleasure in a moment in which she was terrified and it’s the one of the few moments it feels like Shaun Grant’s script that edges to explaining a murderer—he was always emotionally empty and completely devoid of empathy. Instead of resorting to a showy caricature, Jones nails that emptiness, and that’s much more mesmerizing, and sadly believable. Sociopaths often hide in plain sight.

“Nitram” is a story of a man unequipped for volatility who is repeatedly placed in volatile situations, including the emotional upheaval that comes with intense grief. We have seen many films that try to explain how people can choose to commit unspeakable acts, but “Nitram” somehow avoids both demonization and empathy for its subject, just creatively asking us to spend time with this troubled young man, and hope there’s no one like him living next door. 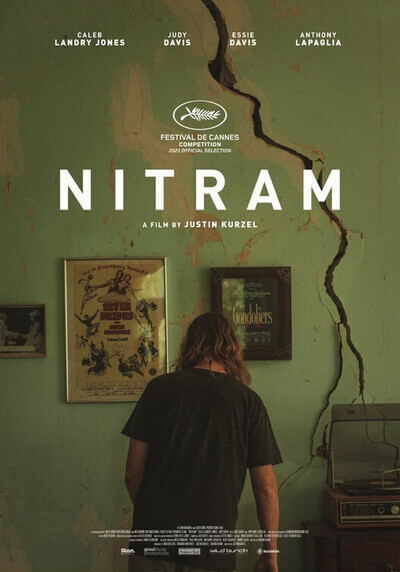