Like an angry drunk at a dive bar, Zoe Saldana’s makeup job in “Nina” dares you to stare at it and court trouble. The first sign of the filmmakers’ suffocating arrogance is that they think you’ll believe that this walking pile of brown paint and prosthetics is music legend Nina Simone. “Nina” hopes you’ll ignore the controversial racial politics of casting an actress with a far lighter skin tone than her real-life counterpart. Yet you feel as if you’re being trolled by the film, because it puts the completely-coated Saldana in a shower, a swimming pool and against Clorox bleach-bright white sheets that are just itching to become smudged. Genuine suspense is created by the possible exposure of Saldana’s original shade, but like actual Blackness, the color stays on without incident. You’ll see some durable makeup in “Nina." What you won’t see is any justification why this film should exist.

“Nina” is completely clueless about what made Nina Simone great. Her music is butchered by Saldana, who sings the songs herself in an ever-escalating series of terrible numbers. Simone’s dark skin color and distinctly African-American features, proud badges of honor that were often problematic in society, are unrealistically recreated rather than realistically cast. Her career-long activism for her people is reduced to a few throwaway lines; never once do we feel how this struggle affected her. This is a film that not only doesn’t give us “Mississippi Goddam," it can’t even say the full name of the song. The lack of the incendiary “goddam” in dialogue about the song is a symbolic representation of how this film neuters and whitewashes its subject.

“Nina” chronicles an unstable, older Simone, which means that, in addition to colorizing Saldana, she’s also aged several years. No one considered reworking the screenplay to focus on a Nina Simone closer to Saldana’s actual age. This is because the film would have to get its hands dirty—the thirty-something Nina Simone was deeply entrenched within the Civil Rights Movement, singing angry songs and clearly harshing a mellow that the filmmakers do not wish to disturb. Doing so would require a character who was less of a victim than writer/director Cynthia Mort’s script wants to portray. One gets the feeling that Mort wants to play the hero here, saving that "poor Negro singer" she’s a casual fan of rather than letting her have any agency.

So “Nina” becomes a story about the real life Clifton Henderson (David Oyelowo), the nurse who was, according to this film, Simone’s manager, savior and the catalyst for her “triumphant return to the stage." He’s presented with hot mess Nina Simone, whose extreme drinking and refusal to take her bipolar depression pills have led her to be temporarily institutionalized. Henderson isn’t a fan—he barely knows her music—yet he inexplicably decides to drop everything and fly to France to be her caretaker. There, he is privy to numerous violent and emotional outbursts by Simone, which occur in almost sitcom-like fashion. None of these dramatic scenes are credibly performed by Saldana, who gives the worst performance of her career. At one point, she just stands and stares angrily into the distance, as if awaiting direction from her first-time director. Oyelowo spends the entire movie looking confused, which is perfect because he’s the stand-in for the equally confused audience.

We’re never clued in about Henderson’s homosexuality, because the film wants to play coy with his relationship with Simone. When her graphic sexual advances are rebuffed, Simone calls him a gay slur, but the film repeatedly implies that something may happen between them. She sings “I Put a Spell on You” to him during a night out with his parents (Keith David and Ella Joyce in cringe-worthy cameos). Mrs. Henderson blatantly asks her son if he’s screwing the soul legend. And Mort sometimes shoots Oyelowo and Saldana gazing at each other with questionable intent. None of this is remotely necessary, and it reeks of desperation.

Meanwhile, Henderson tries to reboot Simone’s career, though her past erratic behavior has made her many enemies who won’t book her. Her former agent, Henri (Ronald Guttman) is a hideous lout who repeatedly Whitesplains things to Henderson and who treats Simone like crap. Henri stars in yet another scene from a 2016 movie where a once popular Black musician pulls a gun on a record executive.

Like all the other scenes of trauma, Mort plays this for laughs that never come.

I could go on plot-wise, but instead I’ll ask why this film was even released. Mort has gone on record stating that her vision was reconfigured by the producers of “Nina," and that she initially wanted her name taken off the finished product. With all the controversy surrounding the casting, it would lack attendance by Simone’s fans, none of whom were happy with Mort’s choice of lead actress. With them gone, who would the audience be for this feature? Biopic fans would pass after taking one look at the amateurish nature of the trailer (which does no justice to how bad the entire film looks and feels). Saldana’s fans, whom the filmmakers were counting on for box office, would shun it as well, because who wants to see an actress they love trapped in a bad movie? One gets the feeling that this is showing up on VOD and at movie theaters near you solely because the producers are delusional in thinking their movie does justice to its subject. And unless the producers re-shot most of the film, Mort should shoulder the blame for how bad it is.

“Nina” is as offensive and insulting as you’ve heard. Even worse, it spits on the legacy of one of the most important African-American performer-activists in American music history. Agent Henri gets the line that sums up how “Nina” feels about its subject: “She’s a fucked up alcoholic and drug addict, yet people will still pay to see her.” Do not pay to see this! Nina Simone deserves better. 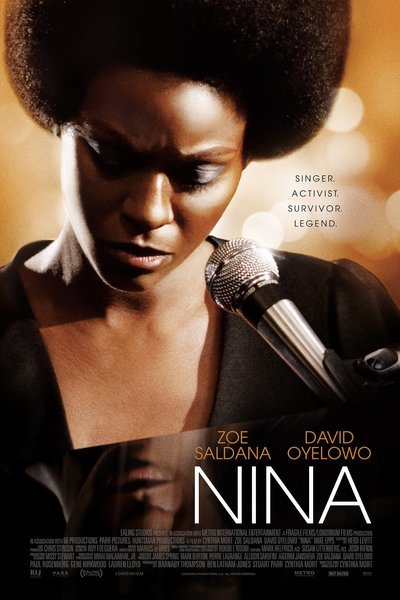