How many of us have tried to break out of a rut into which life has placed us? We’re all there at different points in our lives, and some never get out of that defining groove. Andrew Cohn’s “Night School” deftly captures three people pushing themselves to change the arc of their lives by returning to the world of education to get their high school diplomas. There are many lessons to take away from this rewarding window into lives other than our own, but one that stands out is that anyone considering dropping out of high school and returning later should remember that life gets harder as you get older. Sure, you think there are distractions when you’re a teenager, but imagine having to go to school while working to pay your bills or taking care of your daughter as a single parent. And yet Cohn never turns “Night School” into a sob story or a manipulative tale of redemption—he merely chronicles three unforgettable people, the kind who are imminently easy to root for, and allows us to realize that they’re not that different from us or the legions like them trying to better themselves.

Greg Henson, Melissa Lewis and Shynika Jakes are at very different places in their lives, but they are all pushing their way through night school in Indianapolis, which has one of the highest rates of high school dropouts in the country. Greg is a single father of an unforgettable toddler who gave up on school to make money selling drugs, something his brother still extols the virtues of doing instead of a diploma that doesn’t provide immediate compensation. Greg has reached a point when he knows he needs to provide for his baby girl, and he repeatedly says how he wants a career, and not just a job. He’s undeniably charismatic and smart, but his criminal past and lack of a diploma stop him from being able to show that. Melissa has a totally different story. She basically just doesn’t want to be alone and thinks a diploma will give her more life opportunities. She’s sweet and gentle, the kind of person that’s easy to root for and too easily undervalued by the world around her. And then there’s Shynika, an Arby’s employee who happens into a labor movement (“The Fight For $15”) as she’s trying to get her diploma. One person is breaking down the hurdles in his place, one is reaching out of her insecure shell, and one is learning to use her own voice for change.

Cohn is smart to let the stories of Greg, Melissa, and Shynika play out without much interference or over-production on the part of the filmmakers. There is the occasional credit to indicate a passage of time, but little else—no narration and only a few interviews to camera with people besides the leading trio (although I wouldn’t minded more with the teachers who try so hard to help people but can’t do anything for those unwilling to commit). At its best, “Night School” has elements that are downright suspenseful as the test-wary Melissa waits for her results or Greg fights to get a warrant cleared so his record will be expunged.

It’s a strength of the filmmaking that Cohn allows these stories to be fleshed out beyond the school experience. The film is about not just the pressure of school but the world around these people, whether it be a grueling job, a time-consuming kid, or even a tragedy. The fact that Greg makes it through anything given the year he had while Cohn was filming him is remarkable. You think trying to study is hard in high school—imagine doing it while worried about the health of a loved one. And Cohn wisely follows Shynika into the story of the Fight for $15, realizing that it is as essential to her arc as her education, and arguably gives her the confidence she needed to get her diploma.

There’s an art to listening to people that not all documentarians have. Many feel the need to impose their filmmaking prowess on true stories instead of realizing that it is the presentation of them and the cinematic listening to often unheard voices that will have the greatest impact. “Night School” avoids so many pitfalls of the standard social issue doc just by staying true to this idea. Just listen to Greg, Melissa, and Shynika, and you’ll learn something special. 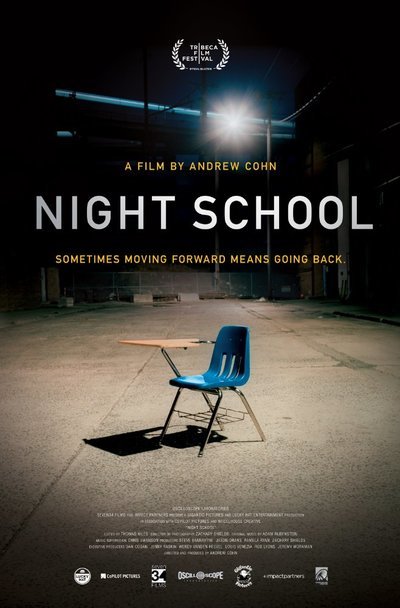