This review was originally published on February 26, 2021 and is being republished for Black Writers Week.

In the clearing of the Côte d’Ivoire (Ivory Coast) forest of Abidjan is the only prison in the world ruled by an inmate—MACA. Far removed from anarchy, the Dangoro named Blackbeard (Steve Tientcheu) stands atop the prison by way of a traditional hierarchy governed by codes, laws, and beliefs. When a Dangoro falls ill, for example, he can no longer govern. He must take his own life. Blackbeard’s once-towering figure is now withered to toting an oxygen tank. He knows his reign as Dangoro is dissipating. But if he can find a Roman, a storyteller, in time before the next red moon, he can invoke “Night of Roman.” And maybe stave off the prison’s power hungry factions for just a little bit longer.

The Ivory Coast, a tiny West African country with a population a hair above 25 million, has an unheralded cinematic tradition, one partially derailed by the government’s unrest during the mid-aughts. Five years ago, however, the country experienced a resurgence when Philippe Lacôte’s debut feature “Run,” a political resistance drama, premiered at the Cannes Film Festival in 2015, and became only the country’s second submission to the Academy Awards. Lacôte returns with an ambitious follow-up, the mystifying French-spoken “Night of the Kings,” a violent, hyper-masculine film that worships the power of storytelling.

Dressed in a yellow-black striped shirt and faded jeans, a young man (Bakary Koné) handcuffed to the flatbed of a pickup truck arrives at MACA. The rail-thin man isn’t much to look at. Without an intervention he probably won’t make it longer than a couple days amongst the rabid prison population. Though he’s an army officer, the jail’s warden—worn-down, sporting an opened camouflage shirt exposing his t-shirt and beer belly—isn’t much of a specimen either. Lacôte’s script isn’t very interested in either man. He never provides us with the young man’s name, or any exposition beyond the kid’s participation in the deadly Microbes gang led by the recently murdered kingpin Zama. Blackbeard, however, does have his eye upon the new arrival—and names the bewildered kid the new Roman.

Lacôte’s drama, in its conceit, borrows from the Arabian Nights folktales. When the inmates adorn Roman in a satin blue shirt, and guide him by candlelight procession through the dank prison halls to the jail’s open living quarters, Roman is initially unaware that he’s speaking for his life. See, during “Night of Roman,” Roman must create and tell a story that’ll last until the red moon sets. If he finishes beforehand, he will be murdered. The set-up not only imbues the film with a sense of urgency, but also a feeling of eeriness, taking some cues from horror films—in every haunted house flick, the goal is always to survive till morning.

“Night of the Kings” is also a nimble cinematic-theatrical hybrid whose central staging takes place in the prison’s aforementioned open living quarters, where transparent sheets hanging from the ceiling serve as the space’s minimalist set design. The title for the film also comes from the French for “Twelfth Night.” And in portraying the power struggle in the prison, Lacôte incorporates Shakespeare’s trademark for crafting offstage drama. Take the prison warden who, while holed up in his office, spies on the prisoners through a slit in the wall. Or how Lass (Abdoul Karim Konaté) and Half-Mad (Jean Cyrille Digbeu), the hyper-masculine leaders of the two opposing factions now posturing for control of MACA, angle for an advantage through offstage assassinations. And much like Shakespeare’s plays served as metaphors for the politics of his age, the confrontations between Lass and Half-Mad are emblematic of the historical civil war experienced by the Ivory Coast between 2002 and 2007.

Roman’s story about the recently murdered Zama King first traces Zama’s roots to the turn of the 19th century, when kings and queens fought to expand their kingdoms. Here, the adolescent Zama accompanies an African queen (Laetitia Ky) heading into battle against her brother. Hanna Sjödin’s costume designs during these period sequences are gorgeous. From the Queen’s crimson colored breastplate and bead necklace to the textured threading of the soldiers’ fabric armor, she provides an enriching display of early African warfare and culture.

While Lacôte hints at elements of magical realism at MACA—Blackbeard believes that upon his death he’ll become a doe—it's in the period piece scenes that the director fully embraces these supernatural shades. First through Zama’s magical blind father (Issaka Sawadogo), and then an elaborate magical fight where spiritual animals are called and the elements are manipulated to enrapturing effect. These elements recede when Roman’s story shifts to a present-day Zama reigning in the Lawless Quarter.

Lacôte uses Roman’s story to explain the historical cycle of violence, and how that cycle has affected his country. Lacôte also adds another dimension to Roman’s storytelling by making the MACA prisoners into Roman's actors. Like a Greek Chorus, they interject Roman’s oration to perform songs dedicated to Zama. They cheer or jeer Roman’s narrative twists (we know Roman knew Zama, but we can’t tell if he’s telling us fact or fiction). At one point, Roman describes Zama as a scorpion, and the prisoners band together to intimate a scorpion. The inmates aren’t searching for truth in their storyteller. They know his tale is nonsensical. Nevertheless, there's magic in letting a story overtake your mind, body, and spirit. It’s that disbelief from an admittedly unreliable narrator that gives these men freedom beyond the jailhouse walls.

The way Lacôte uses Roman’s yarn to not only mix ancient folklore with modern mythmaking, but also theatrical song and dance, is a tremendous feat of filmmaking. Lacôte explored these topics in his earlier film “Run,” but here they’re pushed to more elaborate parameters. He is also buoyed by Tobie Marier-Robitaille’s evocative cinematography, which gracefully tracks each era’s unique mood, from the prison’s urgent orange lighting, to the warm purple regality of the period piece section, to the bright flatness of the present-day Lawless Quarter. Marier-Robitaille captures how the amber lamp glistening off Roman's chest corresponds to the ticking red moon, functioning like the film's major hidden character.

The trick to “Night of the Kings” is also how Lacôte protects his ever-unfolding story from collapsing into meandering turns, or digressions, to maintain a lucid pace. “Night of the Kings” never drags during its breezy 93-minutes partly because the characters are mere set pieces. Take Silence (Denis Lavant), an eccentric coot with a rooster perched on his shoulder, whose sole role is to warn Roman. Or the ostensible patsy, the transgender woman prisoner Sexy (Gbazi Yves Landry). The flat characters would blunt most films, but considering the intricate nature of Lacôte’s world building, the underdevelopment is actually an asset that allows the sprawling film space to breathe. As does Koné’s acute performance.

With “Night of the Kings” Lacôte collapses the bounds between eras, and dissolves myth and reality, performance and remembrance, into one whole. It’s an assured, energetic piece of epic filmmaking, one that celebrates how storytelling, oration, and folklore teach us about our past so we might change our present.

The Shrink Next Door 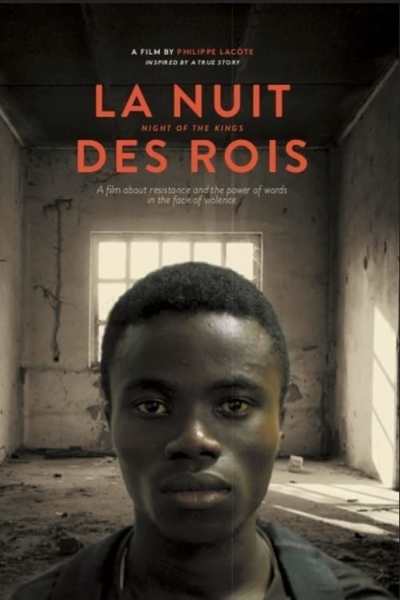