“Unnecessary Roughness” is a more apt title for the scuzzy serial killer procedural “Night Hunter.” Writer/director/producer David Raymond over-stresses the moral grey areas one might encounter if one were a police officer and were trying to save the victims of a schizophrenic serial killer who is also a rapist and pedophile, among other things. Raymond’s somewhat uncommon scenario is, at minimum, unique in its obnoxiousness: he boldly goes where everybody, including the makers of "Dirty Harry," “Silence of the Lambs,” and “Law & Order: Special Victims Unit,” have before him in questioning whether or not the American criminal justice system can handle Simon (Brendan Fletcher), the sort of cartoonishly unsavory character who only seems to exist in movies. The only novel aspect of “Night Hunter” is that, in Raymond’s movie, everybody is antiheroic sometimes, even the guys who are out to avenge Simon’s victims. Unfortunately, while being surrounded by unlikable characters might have complicated an otherwise rote ticking clock thriller somewhat, Raymond and his collaborators are a little too eager to displease viewers.

Much of “Night Hunter” is a tug-of-war between three equally unpleasant groups: there’s Simon; the local cops out to stop him, represented by level-headed Marshall (Henry Cavill), patient-to-a-fault profiler Rachel (Alexandra Daddario), and hothead Commissioner Harper (Stanley Tucci); and vigilante duo Michael (Ben Kingsley), a soft-spoken ex-judge, and Lara (Eliana Jones), a sassy teenager that he uses to catch and then castrate sexual predators.

Listen, you can’t say I didn’t warn you about the unpleasantness.

So: the cops bag Simon early on in “Night Hunter,” and try to get as much information from him as they can. This proves somewhat difficult since Simon shows signs of “paranoid schizophrenia,” though not enough to get either Marshall or Michael to give Rachel the time she needs to profile him better. No, while Simon spends much of “Night Hunter” drooling, slurring his speech, and sing-song-ing about “Jingle Bells” and winter games, Marshall and Michael both know the real truth: that Simon is just “f--king with us,” as Marshall says. Just look at his heavily booby-trapped and perilously underlit sex dungeon basement! About a half dozen cops died trying to investigate that death trap! And there may be other women out there!

This leaves viewers stuck between Simon, who withholds information, has committed horrific crimes, and is profoundly desperate throughout; and Marshall, who’s always right, but seemingly only to prove that his all-action method is superior to Rachel’s slow, talky approach; and Michael and Lara. The former likes to boast that he’s better equipped to stop criminals than Marshall, while the latter antihero is proudly cruel—she sarcastically compliments the “hefty tits” of a nosy diner waitress—and inevitably kidnapped.

We’re obviously supposed to root for either Marshall or Michael, especially given the over-simplified crime statistics that Michael presents to Marshall: he claims that 80 percent of sex offenders re-offend, though a quick Google suggests otherwise. But Raymond and the gang don’t give us many reasons to sympathize or even care about either faction, not beyond Cavill and Kingsley’s well-deployed charms. Granted, that may be enough for some viewers, especially since Cavill is often filmed with carefully mussed-up hair, a lumberjack beard, and rolled-up sleeves … even when he’s outdoors … in the winter. And Kingsley’s soft-spoken line delivery is a balm after so many scenes of Fletcher, in character, running roughshod over poor Daddario, who has the thankless task of bonding with Fletcher’s utterly irredeemable villain.

But that’s the problem with “Night Hunter” in a nutshell: Raymond spends so much time suggesting that his characters and their situational peril are complicated that he never actually makes them complicated. The childhood neglect that informs Simon’s character is mostly used as a plot device, just as there’s nothing substantial to back up the greeting-card-worthy speech that Marshall gives to his social-media-addicted teen daughter Faye (Emma Tremblay): “The people I chase live in the dark, and I could see them really easily until you came along. Because ... you are the light." I’m not sure where the makers of “Night Hunter” hid that light, but it sure isn’t in their movie.

The most annoying thing about a movie that’s simultaneously as preachy and grim as “Night Hunter” isn’t that it’s ideologically repugnant, but that it’s also dramatically inert and actively unpleasant. I, myself, am a Stanley Tucci man (he is money in the bank, except maybe in the “Hunger Games” movies), but even I cringed when he, as the stereotypically overworked Commish, tries to take a swing at Simon (That guy killed a half dozen of my guys, and some had families!). Testing the limits of good taste in otherwise formulaic grimdark entertainment is one thing, but pushing against those boundaries for its own sake is just tiresome. 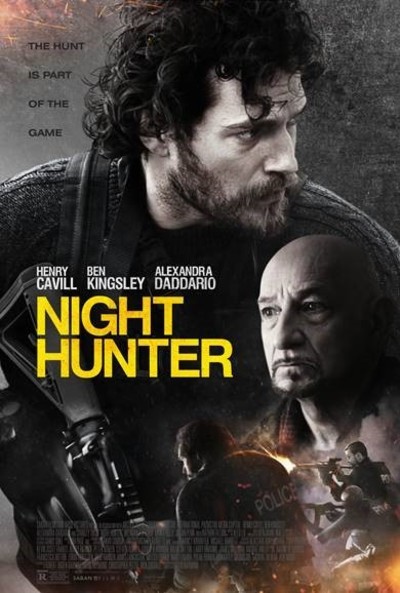