The first half of the Chinese animated fantasy “New Gods: Yang Jian” is a busy and colorful action-adventure. There are snappy back-alley chases, playful fistfights, and a serviceable follow-the-whatsit plot. There’s also a bonanza of computer-animated backgrounds and a host of eye-catching monsters, including dragons, demons, and tigers.

The back half of “New Gods: Yang Jian” strains for a sort of high fantasy seriousness. This part of the movie is still visually attractive, but now the main characters won’t stop explaining their reasons for participating in an apocalyptic confrontation between combative young gods and their treacherous relatives and/or loved ones.

“New Gods: Yang Jian” is the second movie in an expensive-looking series that began in 2021 with the uneven but relatively straightforward “New Gods: Nezha Reborn.” These two “New Gods” movies are not narratively related in any way you need to worry about if you’re only curious to see what a polished Chinese mythological fantasy might look like. And while the first hour of “New Gods: Yang Jian” is about as attractive as it is surreal, the back half only works if you care about the destinies of its undistinguished protagonists.

Which isn’t to say that the first half of “New Gods: Yang Jian” is completely original, nor does it really need to be. Animation fans will note a few similarities between the happy-go-lucky bounty hunter Erlang (Wang Kai) and the cool, but melancholy bounty hunter Spike Spiegel, from the oft-imitated Japanese sci-fi/noir anime “Cowboy Bebop.” Like Spike, Erlang seems to live a carefree existence, drifting from job to job and literally floating above the clouds in a steampunk-style airship.

Erlang and his companions have also just run out of Cosmic Gas, so they must pursue a bounty in order to stay airborne. Their target is Erlang’s estranged nephew Chenxiang (Li Lanling), who’s now trying to find the Lamp of Universal Contentment, a powerful plot device that will free Yang Chan (Risa Mei), Chenxiang’s mother and Erlang’s sister, from a rather extreme form of imprisonment. We’re told that, 12 years ago, Erlang buried Yang Chan under a mountain to punish her for having an affair with a mortal man.

Chenxiang’s whatsit bridges the sizable gap between the movie’s well-paced and easy-to-follow front half and its narratively convoluted and dramatically inert back half. And as you might imagine, the connection between these two parts is rather flimsy, possibly because the movie’s first half is a perfect example of style over substance.

At first, the loose, almost-besides-the-point plot of “New Gods: Yang Jian” feels like an excuse for director Zhao Ji and the creative team at Light Chaser Animation studio to show off various character designs, action figure-ready poses, and matte-painting perfect locations. Now we’re in Square Pot Casino, with its floating hologram screens and gold-colored lighting and fixtures. Now we’re at Smugglers’ Point, populated by dock-side cut-throats and other shifty stock characters. It’s a pleasure to watch Erlang fly through these early scenes.

During the movie’s back half, the makers of “New Gods: Yang Jian” ask viewers to care about Erlang, who, years ago, used to be named Yang Jian. Yang Jian’s quest to stop Chenxiang was always a wobbly road back to his former self, including a climactic fight with Yang Jian’s elusive former teacher, Master Yuding (Li Lihong). Everybody has ulterior motives, and they all inevitably set up the “New Gods” series’ overarching fantasy narrative, which vaguely concerns a centuries-old truce between the gods that will, at some future date, be broken. Both films re-introduce viewers to beloved mythical characters whom mainland Chinese audiences probably already know very well, like Sun Wukong, the mischievous Monkey King.

Unfortunately, the archetypal nature of these characters doesn’t necessarily enliven their actions in “New Gods: Yang Jian.” They often try to reveal themselves to each other—usually representing themselves with bigger-than-life animal avatars, like tigers or dragons—but there isn’t much emotional substance here apart from some breathless expository dialogue. The film’s voice cast members are uniformly decent, but they can only do so much.

Like a lot of big-budget fantasy series, “New Gods: Yang Jian” doesn’t feel like a movie so much as the set-up for whatever follows it. Many small but pleasurable details add up and suggest that the filmmakers know exactly what they’re doing, like the creaking of a wooden airship’s hull or the zippy give-and-take rhythm of a few early chase scenes. I’ll gladly watch whatever Light Chaser Animation does after “New Gods: Yang Jian,” but I suspect that the next “New Gods” sequel will be another gorgeous and over-extended advertisement for the next big thing. 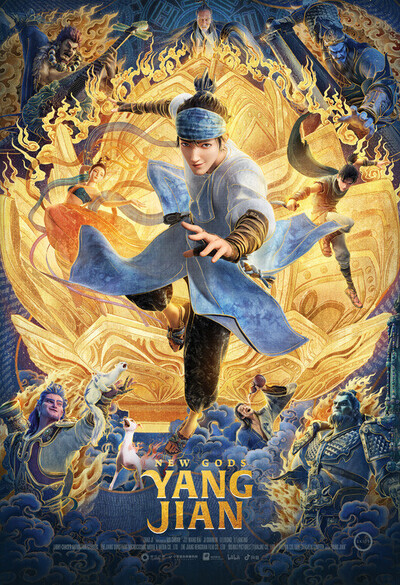