“Nerve” is a lot like high school: The jocks and pretty people have all the fun before eventually being bailed out of trouble by the nerds who were ceremoniously not included. The nerd in question here is Tommy (Miles Heizer), a computer guy who pines for leading lady Vee Delmonico (Emma Roberts). Vee is blonde, beautiful and has just been accepted into CalArts. There’s no way in cinematic hell—or actual Hell—that she’d wind up in Tommy’s arms. Yet it’s Tommy to the rescue when Vee gets herself involved in a sinister smartphone game whose online ringmaster sounds suspiciously like Stephen Hawking.

A brief history of the film reveals that it started out as a popular young adult novel by Jeanne Ryan. I haven’t read the book, but I have seen the "Simpsons" episode where Homer is willing to degrade himself for money. The rules of “Nerve” are very similar. This underground game has two modes, player and watcher. Players are given “dares” by watchers. Upon completion of the dares, which are recorded by the player and other watchers, cash is immediately deposited into the player’s account. The more dangerous the dare, the more money one can make. If a player fails, or bails out of the dare, their game is over and they forfeit all their dough. If a player freaks out, and gets law enforcement involved, the street adage “snitches gets stitches” is quite rudely demonstrated.

“Nerve” wants to be a cautionary tale about the perils of desiring fame through social media, but it isn’t willing to go to the darker depths this material requires. It opts to stay on a more superficial and very goofy level, and while that has its enjoyable charms, it pretty much negates the film’s message. Repercussions are mere afterthoughts here. The ABC Afterschool Specials of my youth, as cheesy as they were, seem more dangerous. The hardened cynic in me was hoping for something akin to Eli Roth making a horror movie about "Pokemon Go." But then again, I am not the target audience for “Nerve." Part of me screamed for this film to get off my lawn, but an even bigger part of me succumbed to playing by its rules. “Nerve” is too much fun to stay mad at for long.

The film is most effective when it’s portraying the dynamics of its teenaged universe. Screenwriter Jessica Sharzer provides enough space for the actors to flesh out and inhabit their standard teen-movie trope characters, and it’s easy to identify with whatever type you were in high school. The interplay between the main characters feels true to life. For example, Vee starts playing “Nerve” as a means to escape the shadow of her more popular friend, Sydney (Emily Meade, very good here). They have a complicated relationship that the film, to its credit, takes time to explore. Like most teenagers, Vee and Sydney want to be popular, and in today’s world, that requires going viral in some online fashion.

Sydney is one of the top players of "Nerve," and is in line to “win” the game by becoming its number one player. Competing for this title is Ty (Machine Gun Kelly) who will do anything to win, and Ian (Dave Franco) the dreamboat whose meet cute with Vee involves her kissing him as her first Nerve dare. The anonymous watchers controlling the game think Ian and Vee make a nice couple, so they’re sent on dares that include trying on expensive clothing at a ritzy Manhattan store and driving a motorcycle 60mph down a Manhattan street while blindfolded. Meanwhile, Ty executes a dangerous stunt that recalls the R-rated Disney film from 1993, "The Program," and the tragic real-life copycat accident that forced Disney to cut the scene in question from that film.

Crazy stunts aside, the camera loves Roberts and Franco, who have massive amounts of onscreen chemistry whether alone or together. The most amusing example is a scene where the duo, dressed only in their skivvies for reasons too complicated to explain, escape into the temporary safe haven of a store elevator. As the camera lingers on Franco’s sculpted abs, one can’t help but think, “How many Big Macs did he forgo to obtain that shit?” However, “Nerve” treats them as more than eye candy; their quickly drawn relationship yields some credible moments of affection. When things start to get shady, it’s easy to believe that Ian might consider losing the game to the young lady he’s suddenly smitten by, even if the cost is a bit too high to pay.

And when things do get shady, Tommy is there to be Vee’s potential savior. His abstinence from Nerve is due to his knowledge that the game takes every iota of information about players from the internet and uses it for nefarious purposes (kinda like Facebook does, but I digress). As in "Snakes on a Plane," the filmmakers throw some love toward geeky computer dudes like me by having Tommy use his technical smarts in heroic fashion. Assisting him is a top hacker who is refreshingly played by a woman of color, Samira Wiley from "Orange Is the New Black."

“Nerve” ends on a note that one can either take as a major sigh of relief or cop-out. I chose the latter, but to be honest, the ridiculous ending is “Nerve”’s one true moment of absolute ballsiness. Add that to some fine performances (including Juliette Lewis as Vee’s Mom) and the glossy sheen provided by cinematographer Michael Simmonds and you have a nice, pleasant little summertime diversion on your hands. 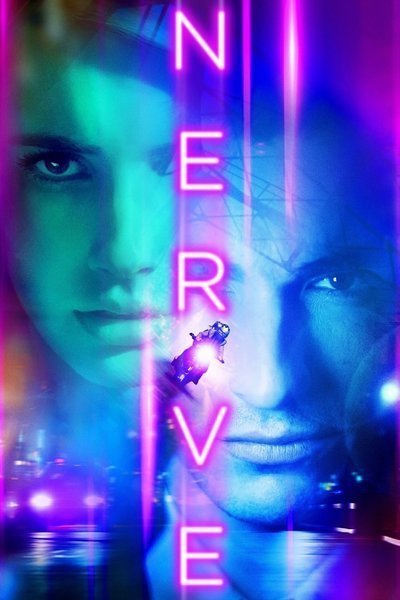