“Needle in a Timestack” is based on a short story by esteemed science-fiction author Robert Silverberg that first appeared in the pages of the June 1983 edition of Playboy. Oddly enough, almost two decades earlier, he published a short story collection by the same name but which had no other connection to it. To some people, especially those driven by John Ridley’s screen adaptation to look up the source material, this may seem a bit perplexing, though it does make a strange bit of sense when one considers the story's nature. As it turns out, this literary curiosity proves to be far more interesting than the finished film, which takes an undeniably interesting premise and then fails to make good use of it.

The premise, I assure you, is a doozy and it involves our old friend, time travel. In the not-too-distant future, it's not just a possibility but it has been commodified to serve as a new perk for the wealthy, who plunk down huge amounts of money to “time-jaunt” to a point in their past and relive their most important memories. Of course, there's a hitch to all of this in the form of our other old friend, the butterfly effect—any changes, no matter how minute, that are made while visiting in the past can have unintended ripple effects on the present day, not just for the jaunters themselves but those in their lives, causing them to change in ways from the minor to the profound, after undergoing a “phasing.” There are all sorts of rules and laws forbidding jaunters from doing such things, but it happens frequently enough that a cottage industry has developed letting people lock away precious memories in a time capsule (for a hefty fee) in the hopes of reconstructing them after an unwitting phasing.

But what would happen if someone decided to say “nuts” to the Terms & Conditions form they signed and decided to use time-jaunts for more diabolical purposes? This is what architect Nick Mikkelsen (Leslie Odom Jr.) suspects is happening to himself and his wife, photographer Janine (Cynthia Erivo). Using the dim memories they are able to recall in the gap between their previous timeline and their new one, they have determined that they have undergone an unfortunate turn of the phase three times over the course of the last year. And while the results haven't been catastrophic (unless you're a dog lover like Nick), there's always the threat that another one could come and wipe out not only their current life but all the memories they have of each other.

What kind of monster would do such a thing? Nick has a pretty good idea that the guy behind it all is Tommy Hambleton (Orlando Bloom), a now-estranged friend from college who has become successful enough to afford to jaunt whenever he cares to go. More significantly, he is also Janine’s ex-husband and Nick is convinced that he is jaunting back into their combined past in order to shift things around so that Janine stays with him. Inexplicably, even though Janine agrees that it probably is her ex, she insists that Nick not report him to the police because even though he has presumably messed with their lives on three separate occasions that they know of, she is somehow convinced that he won’t push things any further. Inevitably, Nick and Janine are hit by another phase and when it is all over, the new timeline has Janine indeed married to Tommy while Nick is now married to his old college flame, Alex (Frieda Pinto). Despite a seemingly blissful relationship with Alex, Nick nevertheless has a nagging feeling that something is not quite right and he finds himself increasingly obsessed with the notion that there is someone out there who is truly meant for him, even if he has no real memory of who it might be, and tries to come up with a plan to set things right.

The problem with a lot of narratives involving time travel is that they seem fascinating on the surface but have a tendency to crumble once you start thinking about all the various paradoxes and conundrums at play. Anyone attempting such a story needs to tell it in as clean and efficient of a manner to avoid inspiring those mood-destroying questions, at least until after it's over. Now, the Silverberg story may not make a lot of sense in the recounting—it's never explained how a process that can send the lives of so many unsuspecting people higgledy-piggledy could have become so widely accepted—but it's told in such a concise manner that readers could conveniently ignore the hiccups until afterwards while perusing the interview with Stephen King. In an ideal world, the story might have served as an ideal episode for something like “The Twilight Zone” or “Black Mirror,” compact shows that deal with the kind of fantastical concepts utilized here.

Although Ridley’s adaptation hits all the major beats of the original story, it has been stretched out in order to fill out a feature-length running time, and this is where the film stumbles. What was once a potent tale of technology gone amok has been transformed into a weird hybrid of “Eternal Sunshine of the Spotless Mind” and “Made in Heaven” (that 1987 curiosity from Alan Rudolph in which two souls meet and fall in love in Heaven and then have 30 years to find each other on Earth without any tangible memories of each other), though it lacks in the emotional power and visual verve of the former as well as the latter’s loopy romanticism. The problem is that none of the characters here are especially interesting, despite the undeniably engaging actors involved (Erivo and Pinto are especially wasted), and since we don’t care about them, it's hard to generate much interest in what happens to them. The mind then wanders to those pesky questions about the whole jaunting concept and the whole house of cards ends up collapsing.

This is especially frustrating as it's easy to imagine a more compelling version that fully explores ideas that have been left here on the back burner. Instead, "Needle in a Timestack" is more like the kind of low-grade and low-stakes romantic fantasy that too often feels like a misfired attempt to cross-breed a project. Who knows, maybe jaunting and phasing will one day become real things and someone out there can fiddle with the timelines long enough to transform “Needle in a Timestack” into a better movie. 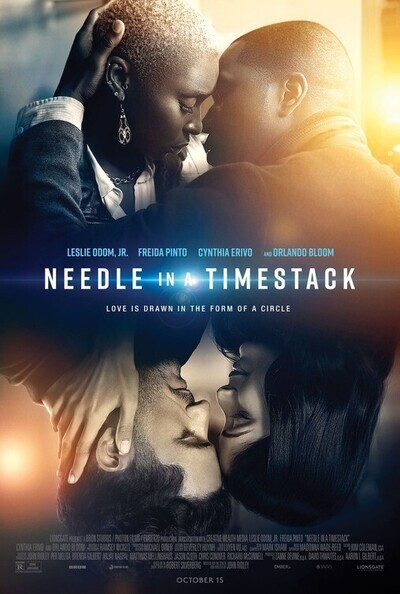