"Naz & Maalik," a first feature by writer/director Jay Dockendorf, shows 24 hours in the life of Naz (Kerwin Johnson Jr., making his acting debut) and Maalik (Curtiss Cook Jr.), Bed-Stuy high school kids. They save up for their "college funds" by hustling cheap items on the sidewalk. The night before, the boys took their friendship into a romantic and sexual realm. They are devout Muslims with traditional parents (Naz having the additional paranoia of a snooping Morality Police 14-year-old sister), and so their situation is precarious. "Coming out" isn't even an option they discuss. Instead, they talk about everything else.

As they circulate their neighborhood, a gleaming car tails them, driven by FBI agent Sarah Mickell (Annie Grier). The FBI agent's identity and agenda is revealed in the first 10 minutes of the film when the point-of-view shifts away from the boys and into her car, a choice that deflates the tension (and it happens every time she's onscreen). The outrageous unfairness of her harassment of them (they are innocent, except for sneaking around having a forbidden romance, and why is that her business?) loops into the larger theme of Muslims in New York becoming accustomed to surveillance ever since 9/11. The FBI side-plot is sloppily handled, and Sarah often comes across as emotionally unhinged. Like she needs another week of training. Maybe that was a conscious choice, but it muddies the waters. The surveillance issue is shown in a far more effective way when the boys attend their local mosque. The imam kindly welcomes the small group, saying, "If you're here with the NYPD or the FBI, we welcome you as well."

The rapport between the two boys is easy, sometimes tender. They glance at one another across the subway train, and grin, keeping connection intact even when separated. Both wearing backpacks, they trudge across parks, down city sidewalks, across subway platforms, their voices coming to us from across a distance. (Cinematographer Jake Magee has a great gift for "capturing" what a bustling New York City sidewalk feels like, its energy, chaos, casual hum of activity. It's good street photography.) When scenes jump forward in time, so has the conversation. Their talk ranges from ethical dilemmas (Maalik whips out his Koran to check what it says), to what they would have done in the Kitty Genovese situation, to whether or not change is good or bad, to their own blossoming romance. "Did you feel weird about last night?" "No. Did you?" "A little bit." "You want to talk about it?" They hide in alleys to kiss. There's an energy similar to William Inge's sexual melodramas of the 1950s, where "good girls" had to hold guys off in order to maintain their purity. Naz struggles with this more than Maalik does. Naz thinks they should stop. Maybe it's not right. His sister already calls him a "fake Muslim," the worst thing anyone could ever say. In a beautiful and funny touch, when she discovers that her brother is sexually active, she confronts him, saying, "You can't be having sex. It's not haram. Give me 25 bucks so I won't tell Mom and Dad."

They're teenagers. They're nice kids. They're full of mischief. There are some sequences (one involving a live chicken) that are almost slapstick. The boys are charming (this makes them successful street hustlers). Fights explode between them, and then subside. Sometimes Johnson and Cook, new and untrained actors, are unable to navigate the emotional switch-backs along the way to a big conflict. However, they are always honest, and gentle with that honesty. When one talks, the other one listens, really listens. Their natural rhythm of conversation is the film's greatest strength.

Some viewers may find all the walking and talking tedious, evidence of a film spinning its wheels. But these are the best sections of "Naz & Maalik." Those scenes don't feel over-determined, or "message-y". Not everything needs to "add up." We get to know them through what they talk about, who are they are in public, who they are in private. In one scene, Maalik, less self-conscious than Naz, picks up a stick, and rattles it along an iron fence, taking pleasure in the loud sound, grinning over at his boyfriend. And that's it. That's the scene. It's an eloquent fragment. There are many more like it. The editing (by Andy Hafitz) is sometimes awkward, keeping in redundancies and scenes that don't reveal anything. Just one example: Naz says to someone he's going to go get a soda. There is then a scene in a store showing him buying a soda. Then Naz is shown sitting on a stoop drinking said soda. It's three moments that should have been one, tightening the screws of the narrative, the extraneous left on the editing room floor.

In Adam Leon's 2012 "Gimme the Loot," two teenagers, passionate about marking their territory as graffiti artists, traipse through different neighborhoods in New York, bantering, fighting, scheming, all with an ease that suggests their friendship and also the development of deeper feelings. It was one of the best films of 2012. "Naz & Maalik" has a similar structure and environment, and at times approaches the ease of "Gimme the Loot," but "Gimme the Loot" shows just how difficult it is to make "walking and talking" a compelling narrative all on its own. "Gimme the Loot" kept it simple, immersing the characters in the hustle of a New York rarely seen on film anymore. The story gave the characters strong objectives and equally strong obstacles, allowing them to battle it out. "Naz & Maalik," instead, strives for complexity. There are some very good individual sequences, and Naz and Maalik's romance is vulnerable and touching, but the film doesn't hang together. It's an important and provocative topic, but "Naz & Maalik" doesn't trust that it really is enough to "just" watch two people walk around and talk. If the characters are three-dimensional, we'll care. We'll want to watch. With "Naz & Maalik," you can feel what should have been, but isn't. 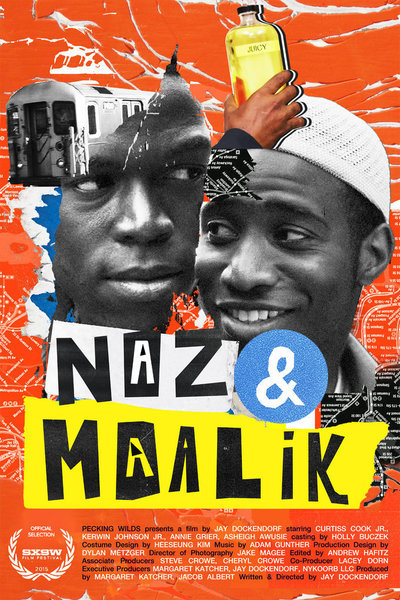