Doing cinematic justice to the immigrant experience and capturing the state of existence where one’s body and mind are split spiritually and geographically is no easy task. The intangibility of that constant hesitation and confusion requires the kind of humanistic touch few storytellers possess. From the early moments of the serene, true-to-life “Natasha," we understand we’re in the presence of one such storyteller with David Bezmozgis, as his film illuminates an ordinary tale of immigration with unexpected earnestness. Sure, “Natasha” on paper seems to only have the conventional makings of a coming-of-age tale: the kind where a teen’s routine gets forever altered by the arrival of a mysterious girl-next-door, with whom he embarks on a life-defining journey over the course of one special summer. But as Bezmozgis digs deeper into his themes—through a script written by him and adapted from his own 2004 short story—he manages to summon something richer out of this tale you might temporarily feel you’ve been told before.

The story is set in modern-day suburban Toronto where we follow the misadventures of the 16-year-old Mark (Alex Ozerov). He is the son of a loving and close-knit Jewish Russian family, who immigrated to Canada when he was just two-years-old. We know from the get-go that he is bored and perennially stuck amid predictable sexual frustrations that are synonymous with his age. Wasting away his days smoking weed, watching porn and going against his mom’s wishes (like any parent would, she insists that Mark gets a summer job and make a meaningful contribution to his family), Mark seems like a typical teenager with commonplace problems. When his aging uncle gets married to a Russian mail-order bride named Zina despite his skeptical but understanding family, Mark’s life gets hit by a jolt of lightning, especially when the new bride’s sullen, clever and increasingly cunning 14-year-old daughter Natasha (Sasha K. Gordon) arrives from Russia to live with her mother and Mark’s uncle.

Still without a job to fill his lazy days of summer, Mark accepts his mom’s proposal and agrees to take the uncomfortably quiet and observant Natasha under his wings: show her around, keep her company and help out with her adjustment process to Canada. But when Natasha proves to be a lot more mature and experienced than Mark, things take a shady turn, especially when the relationship between the cousins-by-marriage assumes an icky sexual dimension, further complicating an already tricky situation amongst the family.

In shrewdly charting the relationship between Mark and Natasha (kudos to him for not making us feel his camera’s male-gaze on Gordon), Bezmozgis maintains a generous dose of suspense in his story. Natasha, who details out her troubled and prematurely sexual past to Mark (turns out, she was a porn-star-in-the-making in her own country), seems to detest her mom Zina and protests her close watch on her. The two passive-aggressively quarrel in several occasions, though we never become quite sure whom to believe. Natasha, after all, could really be a problem child with dark leanings, abusing the love of her lonely, desperate mother who would just like the warmth of a life companion. She might also be telling the truth about Zina being a dishonest deceiver, out to ruin Mark’s uncle’s life. The suspense Bezmozgis keeps between the mother and daughter is set against and heightened by the richly drawn conversations and situations amongst family members. In "Natasha," the generational differences (not only age-related, but culture-driven too) are acutely observed and opinions on the Israel-Palestine crisis, as well as ordinary musings on life are ceremonially shared in living rooms and around dinner tables. In this regard, “Natasha” carries traces of an under-seen, tonally very different but equally clear-eyed film on immigration, Cherien Dabis’ authentic "Amreeka."

The real draw of “Natasha” is without a doubt its young, charismatic lead Gordon, who portrays an emotionally tarnished young woman’s complex journey with a cool kind of unaffectedness. She effortlessly brings out the best and most mysterious in Bezmozgis’ unassuming little film. 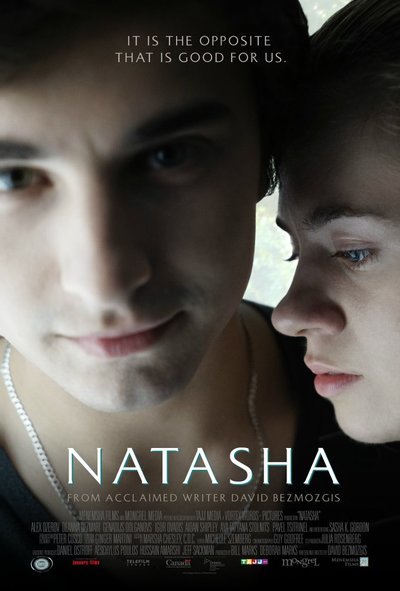