The personal pronoun in the title of “My Scientology Movie” makes sense in more ways than one. For the current era, Alex Gibney’s authoritatively damning “Going Clear: Scientology and the Prison of Belief” is likely to remain the movie about the pseudo-scientific mind control cult that calls itself the “religion” of Scientology. This Louis Theroux-starring film belongs to the Michael Moore school of docu-making, in which much hinges on the personal viewpoint and observational wit of the on-camera investigator.

American viewers familiar with the documentaries of Nick Broomfield may find those provide an apt point of comparison for “My Scientology Movie,” although Broomfield is an actual documentary filmmaker while Theroux (son of writer Paul) is the species of TV personality that Brits call a “presenter.” He has a weekend show on the BBC, that is, and when he arrives in Los Angeles to launch his own investigation into Scientology, the film’s tone suggests that it is aimed at viewers already familiar with his low-key comic persona.

For Americans previously unfamiliar with Theroux, however, this presents at most only a temporary barrier, because his unassuming humor quickly establishes him as a narrator worth listening to. He’s also one with a clearly stated goal that sets us up for the droll chagrin that follows. For years, Theroux confesses, he had hoped to make a film that would discover a more positive side to Scientology than the countless negative images projected in the media. Needless to say, this film (directed by John Dower) doesn’t end up being the first flattering documentary about Scientology made by an outsider—not that Theroux, of course, probably ever thought it would.

Early on, he sketches in the cult’s well-known history, from being founded by science fiction writer L. Ron Hubbard in the ‘50s to how, after Hubbard’s death, control of the organization passed to an impeccably tailored but consummately creepy little authoritarian named David Miscavige. Theroux serves up TV clips from Scientology rallies of recent years, where Miscavige and the torrents of worship washing over him resemble nothing so much as the cult of the Great Leader in North Korea. Except that Kim Jong Un doesn’t have Tom Cruise bounding on stage to lend his support to the idolatrous acclamation that Scientology’s leader commands.

For much of the movie, Theroux drives a rent-a-car around Los Angeles and its environs, looking at Scientology locations and talking to people who have escaped the cult’s grip about its byzantine doctrines and practices. Scientologists profess to believe that humans are ancient cosmic souls who must reincarnate endlessly until they free themselves from negative thought patterns. The effort to do that is behind the group’s use of “E-meters,” which supposedly help members release the debilitating thought forms. But this involves an hierarchical organizational structure and an elaborate, multi-year process that can cost members hundreds of thousands of dollars.

Scientology maintains its power through secrecy and intimidation, and Theroux gets a view of both when he visits the group’s notorious “Gold Base” in Riverside, California, a sprawling rural enclave that’s surrounded by high walls and a phalanx of security cameras. Needless to say, our intrepid reporter doesn’t make it inside, but he gets to film Scientologists’ cameras filming him as its security people come out and demand that he leaves.

Of course, this is an easy contrivance on the director's part: Theroux and company know they’ll be turned away in this manner, as have many before them. And similar things occur in other circumstances, most comically when they’re filmed twice by a cameraman who claims to be just a freelance shooter-for-hire but won’t identify his employer. Because the Scientologists react so reflexively and predictably—as they do in threatening emails to Theroux—it makes you wonder if they’ve learned nothing in decades of dealing with media that have long ago figured out how to bait them.

Among the Scientology apostates that Theroux interviews, some of the most vivid testimony comes from former Scientology Quartermaster General Marty Rathbun, who describes Miscavige’s hysterical rants and violence against his underlings. Rathbun also participates in the film’s most productive contrivance, when Theroux sets up auditions for actors to play the parts of Miscavige and Cruise in a fictionalized probe into the Scientology story. The young performers are very game for their task, and some go deep into the dark emotions that Rathbun describes. The two eventually chosen to embody the Great Leader and his Movie-star Acolyte (whose way of staring is carefully examined) are eerily good at playing men who sometimes seem not altogether human.

While "My Scientology Movie" provides a very entertaining tour of some of the questions that swirl around Scientology, viewers who’ve followed the story through the years will find little that’s new or unexpected. A number of interesting issues are touched on not at all or only tangentially. For example, we hear nothing about recent reports that the Scientology ranks are rapidly aging since the influx of new recruits has slowed dramatically. Yet we get a hint of this late in the film where a small posse of members show up at the soundstage where Theroux is shooting. Their efforts to intimidate are dulled by the fact that they all look well past 60—a sign, perhaps, that the cult may not last much past Miscavige’s passing, if that long. 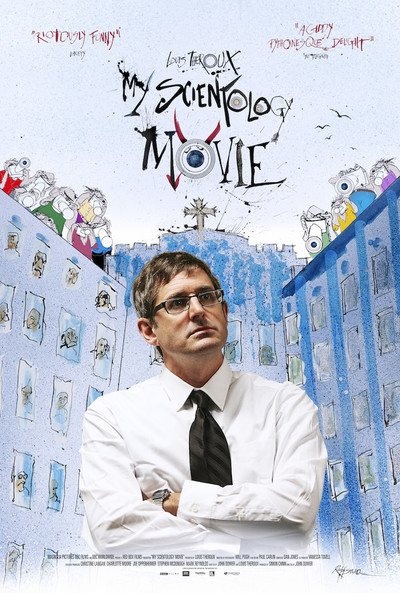 Louis Theroux as Himself

Tom De Vocht as Himself

Marty Rathbun as Himself

Jefferson Hawkins as Himself

Marc Headley as Himself

Paz de la Huerta as Herself