My Little Pony: The Movie

Imagine eating a giant bag of Skittles, then throwing it all up in a fit of sugar-induced nausea and you’ll have some idea of what it feels like to sit through “My Little Pony: The Movie.”

Shrieky, garish and incessantly perky, the movie version of the long-running TV show “My Little Pony: Friendship is Magic” is unlikely to win any new converts. It’s an animated film that’s really intended for the littlest of little kids, who surely will respond to it on a primal, visceral level. This is probably an ideal first movie-going experience for young viewers in that it’s harmless, even though it’s terrible.

“My Little Pony” also aims to stir some ‘80s nostalgia for a certain generation of adults in the audience – hence, the baffling array of random pop culture references, including a famous line from “Pretty Woman” and a shameless plug for another Hasbro property, the Hungry Hungry Hippos game.

Admittedly, this frothy confection is not my sparkly cup of tea. I’m a little too old to have played with the toys as a kid; now, as a mom myself, I have an eight-year-old son who is definitely NOT a Brony. He attended a recent screening with me under vocal protest, despite my encouragement that he keep an open mind heading into the film, as is always our goal. (“Sorry, kid,” I told him. “Not everything can be ‘Dunkirk.’”)

We wouldn’t have known our Pinkie Pie from our Fluttershy if they came up and bit us on the butts—which they’d never do, of course, because the pony pals are all about kindness and friendship. Now that we’ve spent a little time in the magical, rainbow-hued land of Equestria, however, we are unlikely to return. It is just mind numbing in its simplicity.

But the folks behind the movie do deserve credit for remaining true to the fundamental elements of the “Friendship is Magic” television show, including admirably keeping the voice actors who’ve brought these characters to life for the past seven seasons. Longtime director Jayson Thiessen and lead writer Meghan McCarthy also made the leap from the series to the big screen. (Rita Hsiao and Michael Vogel share screenwriting credit.)

Despite that consistency, though, “My Little Pony: The Movie” simultaneously aims to expand its appeal by adding new characters to the ponyverse and casting well-known actors to play them. So while its themes of trust and teamwork are super basic, the narrative itself is all over the place, with a multitude of underdeveloped, crammed-in characters. Plus, every once in a while, the various animals burst into song, but not in any particularly memorable way. (Although one peppy little ditty about being awesome was a toe-tapper, I will concede.)

Anyway, here’s what it’s about: Twilight Sparkle (voiced by Tara Strong), the reliable leader of the group, is in the midst of planning some big friendship festival. But when a sinister force invades the land and kidnaps the reigning pony princesses to harness their power, Twilight Sparkle must go on a journey to save them, and their home, with help from her pals. They are: the colorful Rainbow Dash and the country girl Applejack (both voiced by Ashleigh Ball); the unflappably upbeat Pinkie Pie and the sensitive, timid Fluttershy (both voiced by Andrea Libman); the vamping, glamorous Rarity (Tabitha St. Germain); and their wisecracking dragon sidekick, Spike (Cathy Weseluck).

They’re trying to outrun the villainous Tempest Shadow (voiced by Emily Blunt), a bitter unicorn with a broken horn who’s doing the bidding of the evil (but shticky) Storm King (Liev Schreiber). Along the way, they run into a crew of one-time pirates who are now stuck working as messengers (Zoe Saldana provides the voice of their leader) as well as a mother-daughter duo of seahorses in their hidden, underwater lair (voiced by Uzo Aduba and Kristin Chenoweth). There’s also a sly cat (Taye Diggs) who may or may not have the best intentions when he offers to help the ponies. And finally, there’s … Sia. No really, it’s Sia in horse form, complete with the wig and everything.

If you’re having a hard time following this, it’s understandable. I watched the movie and I’m still not entirely sure about everything that happened. But perhaps a movie about the transformative power of friendship—even one as messy as this—isn’t the worst thing in the world right about now. 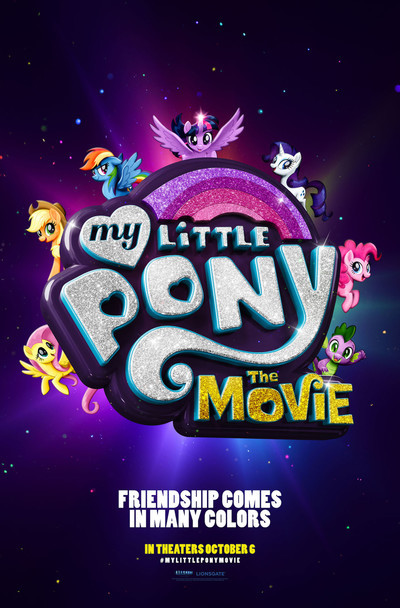 Wrier (based on the television series created by)